Rid the world of alternative fuel and turn them back to gasoline in order to make Axlerod rich (failed).

They are a terrorist organization of lemon cars known for their several manufacturing defects that left them rejected by the world, and they intend to get their revenge by discrediting alternative fuel in order to make profit out of selling oil. This terroristic group consists of 44 notable members and five notable associates.

According to their boss Sir Miles Axlerod, the Lemons have felt rejected by the world because of their defects during the past, an event that left them feel unloved. The film, however, reveals little details regarding how their fellow cars treated them.

As such, Miles Axlerod formulates a plan that involves forcing the entire world to abandon alternative fuel and resorting to using oil (as he still owns the largest oil reserves in the world despite his claims that he has been converted into a hybrid). To that end, Axlerod created the World Grand Prix for racers around the world and a new alternative fuel called Allinol (which is actually gasoline engineered to ignite by an EMP beam). He also plans on murdering anyone who gets in their way.

Being in cahoots with Axlerod's plot and sharing the ownership of the oil reserves, several Lemon families conspired to aid Axlerod in his plan to sabotage the Grand Prix races. To that end, Axlerod gets his right-hand Professor Zündapp to create EMP weapons designed as Prix cameras to ignite any Allinol supply during the races. Because of this, the first two races in Tokyo and Porto Cosa were disasters as many racers engaged into crashes after getting their Allinol ignited by the EMP beams. To cover his tracks, Axlerod suspends on using Allinol for the third and final race in London, though Lightning McQueen stand firm on his decision to use Allinol. Because of this, Axlerod contacts Zündapp to murder McQueen during the final race. This was witnessed by McQueen's best friend Mater, along with two British agents Finn McMissile and Holley Shiftwell, who end up being captured and take hostage in Big Ben.

During the final race, Zündapp gets Grem and Acer to fire up their EMP beam on McQueen, but the latter escapes unharmed (due to Sarge switching McQueen's Allinol supply with Fillmore's organic fuel), just as Mater escapes to warn McQueen of the plot. Anticipating this, Axlerod arranges for Zündapp to place a bomb inside Mater's air filter so that he and McQueen would be killed by the explosion. As Mater runs off out of range, Zündapp ends up being chased by a freed McMissile, forcing the other Lemons to take action and catch McQueen. Though McMissile and Holley manage to defeat Zündapp, the other Lemons surround them in an intersection, preparing to wait for the imminent explosion to kill McQueen, Mater and the agents. Mater tries to talk the Lemons out of the plan by pointing out that it won't make them feel any better, but even though the Lemons agree with him, they still want him and his friends dead for their greed. Fortunately, McQueen brought in his friends from Radiator Springs to stop them, forcing the Lemons to surrender.

Mater eventually proceeded to expose Axlerod as the mastermind behind the plot by forcing him to deactivate the bomb within close range. With the plot exposed, the Lemons are arrested for conspiracy to commit crime, murder, attempted murder, and embezzlement.

Out of the fourty-four known members listed here, at least 70% (31 out of 44) of all of the Lemons were arrested. 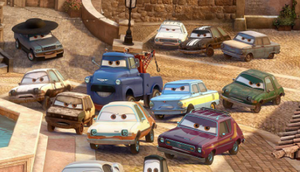 "You will find the second agent, and kill him."

The Lemon heads angrily deciding to kill McQueen and Mater.

Vladimir Trunkov's defeat as he is arrested by Sheriff.