Lena Luthor is a recurring character and villain in DC Super Hero Girls. She is also the sister of Lex Luthor. She was responsible for creating the crystalline creatures called Kryptomites made from Kryptonite in many different colors.

Lena is a young lady with, green eyes, peach skin and orangey blond hair (which is later shown to be a wig). She wears a large set of glasses, a necklace featuring a Brainiac logo, a green top and a purple t-shirt underneath. She also wears some blue skinny jeans.

Lena Luthor makes her first appearance in the third season opener; Batnapped, voiced by Romi Dames in the English version.

Lena bring some copper wiring to Doc Magnus in his workshop, also admiring Supergirl's work on her jet.

She is voiced by Cassandra Lee Morris in the 2019 TV series. She is again depicted both as the sister of Lex Luthor and as a villain. This version is a child instead of a teenager. Her mother reveals that, her full name is once again Lutessa "Lena" Luthor, but chooses to go by Lena. 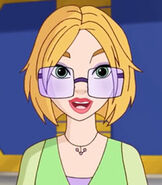 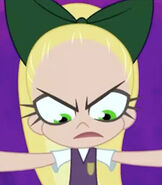