Agitating entire nations into killing each other.

Throw the world into chaos by exposing everyone's Internet history just for the fun of it (failed).

Lennart Bedrager is the main antagonist of South Park Season 20. He is the founder and CEO of TrollTrace.com. He initially appears to be a Danish Anti-Troll activist, but he is eventually revealed to be a troll himself, and a much worse troll than SkankHunt42 and the others.

He conducted a funeral for Freja Ollegard after she committed suicide a large community. In her eulogy, Bedrager vows to destroy the troll responsible for her death.

Bedrager later holds another vigil for Freja Ollegard with several other Danes. Like in the previous vigil, he vows to "deal with them again."

Bedrager later advertises a crowdfunding campaign to acquire the funds he needs to complete his new internet service. However, in response to his plan, the trolls begin planning a massive troll to prevent the service from being completed. The trolls launch a successful troll of Denmark, causing the country's popularity to sink and for them to stop being funded. As a result of the troll, Bedrager takes TrollTrace offline from social media. However, Cartman and Heidi offer their assistance, providing Lennart with the final factor he needs to complete their program, the emoji analysis.

To prevent TrollTrace.com from going online, Hillary Clinton and the US Government make a deal with TrollTrace and Lennart, givng them SkankHunt42 and his associates in exchange for not leaking their Internet history. However, Lennart had no intention of holding up his end of the deal and went forward with TrollTrace.com anyway.

SkantHunt later requests to speak with Lennart privately. In their meeting, Lennart reveals to SkankHunt that his true goal is to simply start World War III for the fun of it, and that he isn't even Danish. He then locks both the Danish and the Trolls in a room and rick-rolls them before preparing to go through with his plan.

He later leaves Denmark via his helicopter but turns back around when he sees Gerald on security footage disabling the TrollTrace.com servers. He soon confronts Gerald one on one in front of the final switch keeping the website online. Lennart berates Gerald for thinking he's any better than him, telling him that they are essentially the same. Gerald then seemingly gives in to Lennart, but instead kicks him in to groin and knocks him off the balcony, sending Lennart falling to his death.

Lennart Bedrager comes across as a somber, humorless, crestfallen, and sorrowful individual. He shows no concern for the lives and freedoms he endangers so long as his idea of justice is upheld.

In truth, Lennart is actually an American who wants to troll the entire world into a third World War just for fun. He is even more cruel than Gerald, in that he tries to get people killed. 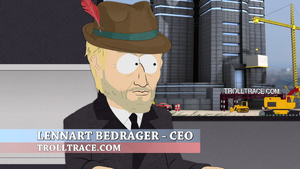 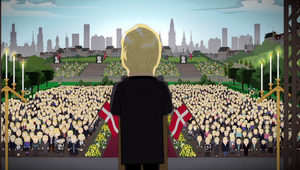 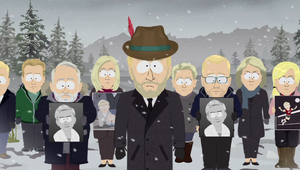 Holding a vigil for Freja Ollegard. 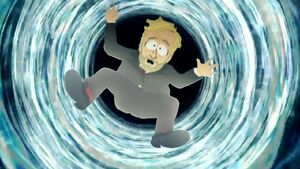