Add the Powerpuff Girls themselves to his collection (succeeded, for a while and ultimately failed).

Lenny Baxter, also known as the "Comicbook Geek", is the eponymous main villain of The Powerpuff Girls episode "Collect Her".

He was voiced by Tom Kenny, who also voiced the Mayor of Townsville and the Narrator throughout the entire series.

Lenny Baxter is an obsessed fanboy who takes away everything to do with the Powerpuff Girls, not only the merchandise (which he has completed, leading to his descent to villainy), but also Bubbles' drawing and crayons, Buttercup's punching meat and Blossom's makeup, and even a portrait of them and Professor Utonium. He also takes away everything they have, including the hotline. Finally, he tricks the Powerpuff Girls into coming to help him so he can box them, much to the anger of the citizens of Townsville, especially the Professor.

The Professor and a group of kids, aided by the Mayor and their fellow Townsville citizens, blackmail him into telling the former where the girls are being hidden by the former telling each individual child to open up a toy package, much to Baxter's dismay. Professor Utonium tells him although he has all kinds of merchandise, there is one thing he doesn't have: true fandom, because a real fan would never keep his/her heroes to himself/herself, but let them be free to do things, such as what they do best. Baxter tells him they are on the top shelf, in boxes.

He is then arrested and imprisoned for a long time. 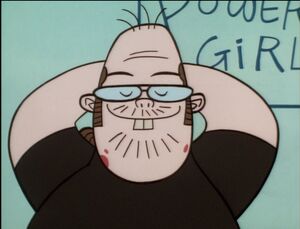 Lenny resting in his chair. 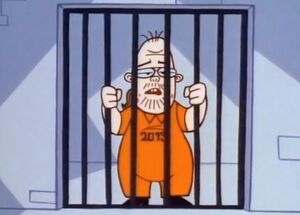 Lenny Baxter now locked away in a his own box, one that will never be opened for a long, long time.