God-hand, Head of the Steel Claws

Assault
Battery
Destruction of property
Accessory to crimes against humanity

Lenny Curtis is a member of the fanatical terrorist cult known as Sapientes Gladio. He is of considerable rank but still the lowest lieutenant within the group. Lenny is by all accounts dim and easy to trick and often gets carried away with his role as a villain to the point where he often forgets common-sense; never-the-less he is considerably strong a father to his men the Steel Claws, the foot-soliders of the group.

Lenny originally joined Sapientes Gladio because it was the best way he knew how to make a living. His strength saw him rise in the ranks and before long he was pledging loyalty to Rasputin personally. When the game, Shadow Hearts Covenant, starts one of the first things the player will see after the opening screenplay is Lenny Kidnapping a bound and unconscious Roger Bacon, a monk, alchemist and major character in all the games. Lenny first encounters Yuri, the hero, in a church in Domremy France. He is seen coming in from an assault on the German soldiers of Karin, the heroine,'s unit. When he gets inside he is holding a knife to the throat of Jeanne, a young girl in the village and a friend of Yuri's. Lenny arrive to use Jeanne as leverage to keep Yuri from finishing off Nicolai, Lenny's superior, who had been heading up the expedition to trap Yuri. After the ambush though Karin realizes her supposed guide Nicolai was evil and turns a gun on Lenny if he doesn't let Jeanne go. However Lenny had still bought Nicolai enough time and provided enough distraction and Nicolai successfully use an exorcism item on Yuri, cursing him and limiting his powers as a Harmonixer, being that merges with demons.

Two of Yuri's other friends, Blanca, the wolf and Geppetto, the puppeteer, help Yuri and Karin get away. After the confrontation in Domremy Lenny pursues the heroes into Paris where they had gone to lay low and do some research on the curse in Geppetto's old loft. While mostly only Lenny's steel claws engage in battle in Paris with the heroes Lenny briefly encounters them in the subway tunnels under Paris as the crew is trying to escape. Lenny is about engage them in combat but realizes a little too late that he and Yuri's carts are on different tracks and gets diverted into another tunnel allowing the heroes to get away.

Lenny then ambushes Yuri and friends at Roger Bacon's house in Wales. Lenny explains that Roger is long gone. When Yuri then tricks Lenny into telling him where he took Roger immediately after accidentally reavealing Roger was taken to Florance Italy Lenny realizes what he has done and begins to groan in disgust with himself, his steel claws taking a moment to try to cheer him up. Yuri laughs a little and proceeds to just walk way but Lenny sees him before he leaves and aims to redeem himself by stopping Yuri right there. Yuri and his friends will defeat Lenny and his steel claws and Lenny will return to Nicolai to report his defeats and blunder. Nicolai says he is just glad Sapientes Gladio had already moved Roger again. However Nicolai seemed more concerned with something else, one of his personal schemes separate from Sapientes Gladio's main goals. Lenny follows Nicolai to their airship and catches Yuri and friends off guard at the old hideout in Florance. The demanded that Yuri bring back the book known as the Émigré Manuscript which Roger had hidden away and Sapientes Gladio's best efforts could not get him to reveal.

Lenny encounters the heroes again when they go to Sapientes Gladio's hideout to exchange the book for Roger. However they are ambushed by Veronica Vera, another officer within the group lower in rank then Nicolai but still higher than Lenny. Veronica sets up a poison trap that paralyzes the heroes, except for Blanca who had smiled the vapors early and stay out of range. While Nicolai begins reading the Emigre' and Veronic moves the heroes to the dungeon Lenny goes off in search of Blanca. By the time Lenny finds him, Blanca has already set the others free and they have made their way to Roger's cell. This time Lenny sends all his remaining men at the heroes and tells Veronica to leave with Nicolai to see their master while he finishes them off. After the waves of steel claws it is just Lenny and the heroes left. Lenny decides to use the power Rasputin had entrusted him with and transforms into the demon God-hand. God-hand first demonstrates his power by pounding a hold in the side of the wall to the outside and then attacks with all he has. After the battle God-hand returns to Lenny and he has just enough time to admit defeat before falling out the whole and several stories in to the cold sea below.

Not quite dead and not quite evil

In one of the side quests in the game Yuri and friends will find Lenny has survived his fall. Lenny helped out a street-urchin by encouraging him to put his brains to good use and tutoring him in math. Next Yuri and friends discover Lenny was checking in with one of the Steel Claws, Lenny had given him leave to look after his mother instead of putting him on the front line of his final battle like the other Steel Claws. Further pursuit of Lenny reveals shortly after recovering from his injuries he went to Russia to check in with Rasputin but would find his lord was killed some time before and then wandered off looking for a new way of life with Sapientes Gladio disbanded. At the very end of the quest just before recovering a powerful weapon Yuri and friends will encounter Lenny in the flesh. Lenny tells Yuri he has given up his evil ways and insists he was just working for Sapientes Gladio because it was the best way he knew how to make a living and was one of the few members that was neither hard-core evil nor blinded to Rasputins insanity. Yuri lets Lenny leave to try to earn an honest place in the world.

In Shadow Hearts: From the New World, Lenny makes and early appearance as the butler of the game's protagonist Johnny Garland. Lenny had apparently journeyed to the United States after leaving Europe in the second game and gotten work with Johnny's father. Graham Garland had been killed when he accidentally created Lady but the details of his fate were never known to Lenny and after he turned up dead Lenny just kept on working for Johnny Garland. Lenny looked after Johnny as a guardian as well as butler. Whether leading troops into battle, working with terrorists, following his master's orders or looking after an orphan Lenny's loyalty seems to be his greatest quality even more so than his massive strength and savage fighting style, in-fact his loyalty to a cause or ally seems to last even slightly longer than those he has sworn it too. 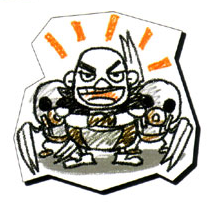 Add a photo to this gallery
Retrieved from "https://villains.fandom.com/wiki/Lenny_Curtis?oldid=2598851"
Community content is available under CC-BY-SA unless otherwise noted.