Leader of the Hope Cougars

Having a powerful father

Getting haircuts
Carving his name into wood
Shooting targets

He is voiced by Shane Stevens.

Little is known about Lenny's early life other than he was born on December 20th, 1978 to Margaret and Blake Dexter, he was a cub scout when he was young, and he got his trademark limp in his right leg from his father's abuse.

Lenny first appears in the outro cut-scene where Blake and his friend Edward Wade are negotiating a deal for Wade to kidnap a young girl name Victoria who possesses an isotope on a necklace which significantly increases her speed and strength, even able to disarm and kill grown men. After agreeing on a price for men and equipment, Blake encourages Wade to bring along Lenny and he reluctantly agrees, mocking him mercilessly as they leave.

During the middle cut-scene of this mission, Wade is once again mocking Lenny over his injured leg and his alleged "limp dick", angering Lenny to the point where he accidentally shoots a nun in the head and sarcastically congratulates him for it.

Later on after Agent 47 kills Wade, Lenny takes the opportunity to take Victoria hostage with a grenade so 47 can't shoot him and mocks Wade as he lays dying in the basement of the orphanage and leaves. 47 takes Wade's keys and a matchbook from Hope, North Dakota, then goes after him.

In order to find out where Lenny is, 47 goes to Hope to get information on Lenny's whereabouts, eventually finding the bar where he carved his name into one of the tables and the bartender tells 47 he goes to the town barbershop everyday at 12 o'clock sharp.

After getting his signature silenced silver baller pistols from the local gun shop, 47 finds the Hope Cougar's, Lenny's personal small time gang. Knowing that they would try and stop him from kidnapping Lenny and already knowing too much about Victoria, 47 kills all five members and then ambushes Lenny at the barbershop where he knocks him out and kidnaps him.

The End of The Road

Once 47 and Lenny are in the middle of a desert, 47 interrogates Lenny while he's forced to dig his own grave. Eventually, Lenny admits that Blake told him to leave Victoria with his personal bodyguard Sanchez, who's in a fight club at a factory south of Hope.

47 then has two options, either kill Lenny or leave him to his undetermined fate in the desert. Either way, Lenny is never seen or heard from again. Once Blake eventually hears about his only son's uncertain fate, he becomes even more determined to kill him.

Lenny is best summed up as an arrogant coward who only wants other people, especially his father, to accept him and treat him with respect. Whenever Wade or his father isn't around, he brags about his accomplishments and exaggerates them greatly, such as when he claimed to his barber (Agent 47 in disguise) that he personally killed over fifty hitmen with only one bullet each.

When Agent 47 kidnaps Lenny and takes him to the middle of the desert and if he decides that Lenny isn't worth killing once he's hiding behind an abandoned explosives wagon, Lenny will take out his Derringer and shoot at 47 while calling him a coward for "running away". He'll usually miss both shots and even if he does hit 47 with both on the highest difficulty, it still won't be enough damage to kill him, and he'll immediately start apologizing if 47 approaches him again stating that he was just scared of being attacked and reminding him that he killed all of his friends.

Nearly all of 47's weapon's choices in "End of The Road" will have Lenny begging to "not be killed like that", like with the baseball bat or a silenced pistol, and usually tells a brief instance where he was horrified to watch someone killed with said weapon. He'll even try to have 47 go after his father and the entire town of Hope instead, saying he wouldn't care as long as 47 let's him live.

Lenny was also incredibly slow, likely having some sort of intellectual disorder. He had a broken way of speaking, poor grasp on reality, and a lack of common sense or perception, leading to him getting exploited and abused by people such as Edward Wade. He wasn't as sadistic as his father, being unwilling to shoot a nun until goaded into doing so by Wade and feeling genuine remorse for his actions when confronted by 47. His relationship with his father was also decent, as shown by his father being devastated by his death. 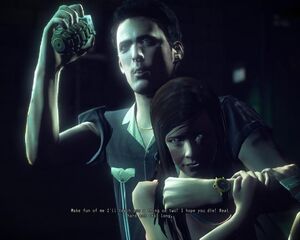 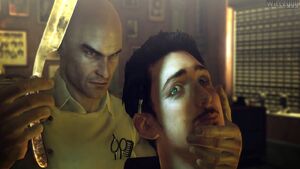 Agent 47 kidnapping Lenny at the barbershop.

Lenny digging his own grave. 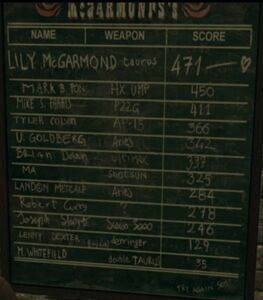 Lenny second to last on the Hope gun shop leaderboard. 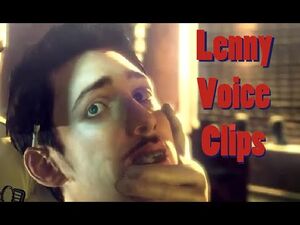