Get affection from his father.

Getting money for his drug habit.

Leo Manfred is an antagonist in Markus' story of the 2018 interactive videogame Detroit: Become Human. He is the son of the famous painter Carl Manfred and he is one of the confirmed Red Ice users in the game.

He was voiced by Paul Spera.

Leo Manfred was born in 2010 due to a fling between Carl Manfred and one of his fans. Carl knew that Leo was his son from the moment he was born and paid a healthy supply of child support, but he didn't meet him face to face again until Leo was 16. Their relationship was damaged from the time apart and became more strained after Carl learned of his son's Red Ice addiction.

Leo doesn't reunite with Carl until he is 16, and had at that point became addicted to the drug Red Ice. Each visit with Carl drives a further wedge between them. He occasionally asks Carl to share his wealth, which he spends on the Red Ice and possibly other drugs. Leo introduces himself by coming to Carl's house, either high or going through withdrawal, and asks him for money while he's painting with Markus. Carl states that he had already given him money, but Leo had already spent it. Carl refuses to give him more and Leo loses his temper and starts berating Markus, referring to him as an object that Carl cares more about than his own son. He pushes Markus and quickly stops when Carl tells him that's enough. He then turns around, saying that Carl never loved him or anybody as he walks out.

In the next chapter, "Broken", Leo can get into multiple situations. Leo breaks into Carl's home while he and Markus are out at a party and tries stealing his paintings. When they arrive home and see the light on, Markus calls the police and then goes in (with or without Carl) and confronts Leo. Carl questions why and what Leo is doing and Leo implies that he plans on selling some of his art and to consider it a "downpayment on his inheritence". Carl tells markus to make Leo leave, and to this, Leo responds that he is disappointed and angry about how Carl only ever tells him to go away. Leo will, no matter the choices, will start trying to instigate a fight with Markus. Carl will tell Markus to not fight back and endure the pain. However, if Markus does this, Carl will die from an heart attack. Markus mourns his death as Leo looks on in shock. When the police arrive, Leo will quickly tell the police that "it was the android" and they shoot Markus, resulting in him being taken to the dump. If Markus fights back, he will hit Leo hard enough to knock him unconcious, this sends Carl into shock, who then crawls over to Leo and tells Markus to go away so the police won't kill him. The police shoot Markus regardless.

After Markus was gunned down by the police, Leo either gave his statement asking for the public to respect their privacy as shown in the magazine "Famous Detroit Painter Dies", or he was sent to a hospital and remained there for the duration of the game.

Leo can also make an appearance in "Night of the Soul". If Carl lives, it is revealed in a video message that Carl stayed with Leo while he was unconcious in the hospital, and he'll be going to rehab and getting off of "all that stuff" because it "turns him into someone he hates". Ultimately, he ends with saying that he is proud that he's Carl's son. If Carl dies, Leo and Markus both happen to visit Carl's grave at the same time. Leo simply looks at Markus as he walks away. 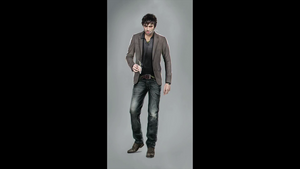 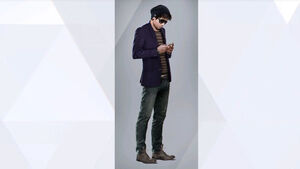 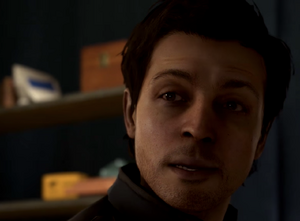 Carl and Markus see Leo breaking into the house and trying to steal Carl's paintings. 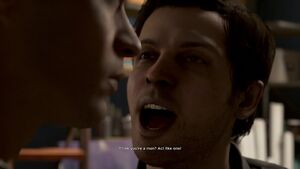 Leo's villainous breakdown during his and Markus' confrontation. 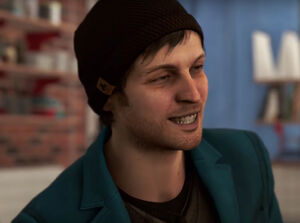 Retrieved from "https://villains.fandom.com/wiki/Leo_Manfred?oldid=3786551"
Community content is available under CC-BY-SA unless otherwise noted.