SS-Oberst-Gruppenführer of the Nazi Party

Officer of the Waffen-SS

SS-Oberst-Gruppenführer Leo Steiner is a major antagonist in the 2021 video game Call of Duty: Vanguard. He is a high-ranking officer of the Nazi Party who led the invasion of Stalingrad, and was also a conspirator of Hermann Freisinger's coup to usurp Adolf Hitler and form the Fourth Reich. Before the events he lead came into fruition, he was eliminated by his nemesis Polina Petrova, who would later go on stop Freisinger two years later.

He was voiced by Ray Proscia.

Leo Steiner was born in Germany, but his past is unknown, but Jannick Richter refers to him as a "lowly officer", implying that he came from a low social rank or was just another officer within the party. He later joined the Nazi Party under Adolf Hitler, and was sent to the Eastern front to fight against the Red Army and take control over the Soviet Union. Steiner also became acquainted with Hermann Freisinger, a fellow officer who created "Project Phoenix" to usurp Hitler to become the new Führer and form the Fourth Reich.

In the summer of 1942, Steiner led the invasion of Stalingrad to expand Germany's control over the Eastern front. Once the planes bombed the city, Steiner sent in his soldiers and tanks to find and execute any survivors. During the invasion, Steiner ordered the surviving citizens to accept their defeat since he had them surrounded, but the Partisans would be able to escape due to the assistance of medical officer Polina Petrova. After the first day of the invasion, Steiner would gather enough information on Polina and her family, and the Nazi Party continued their pursuit of Petrova once she became the dreaded "Lady Nightingale". Steiner continued to keep the Nazi's control over the city during the winter period of the war, and the party placed wanted posters on Polina since she had become a symbol of hope for the Soviet Union.

In January of 1943, Steiner and his army kept the pressure against the surviving Red Army soldiers outside the city, but the general would come into contact with Fresinger. While speaking with Hermann, one of Steiner's snipers noticed Polina and her brother Misha in the area. Leo ordered his men to kill the two, but Polina managed to escape down below while Misha sacrificed himself since he was already wounded. Seeing that she was still alive, Steiner taunted Lady Nightingale while sending his men in each destroyed building to find her. Once all of his men were eliminated, Leo decided to take it upon himself to kill Polina, managing to disarm her from a building afar.

Inside a dark building filled with mannequins, Steiner attempted to kill Petrova, but was mortally wounded during the encounter. On the roof of the building, Steiner told Polina that she wouldn't find satisfaction in killing him, and that Freisinger would complete what he started. Before being killed, Leo pleaded to Polina that he could help her, but she mocked him, stating that every Nazi she has killed have said the same thing. Once telling him that she will kill Freisinger and that the Nazis created "Lady Nightingale", Polina pushed him off the top of the building. His body landed around his surviving men, but his death would spark the Red Army to take back their city from the Nazis.

Freisinger would continue his plan to become Führer of his new Reich, which came into fruition once Hitler committed suicide during the Soviet's siege of Berlin. However, Polina would stop Freisinger alongside Task Force Vanguard, a special operations group formed to find intel about the secret project. 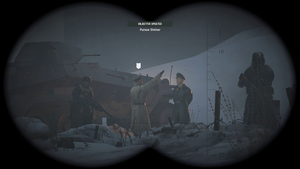 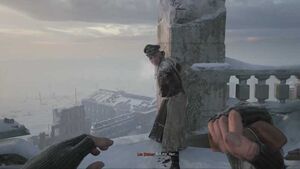