Authority over a giant private army

Discover the Legacy of the Azran Civilisation and use their power to build a more peaceful world.

Leon Bronev is the secondary antagonist in the second trilogy of the video game series Professor Layton and had his first appearance as a secondary antagonist in Professor Layton and the Miracle Mask. He serves as the main antagonist of the sixth and last game, though at the end of the game the Voice of the Azran takes this role. Bronev is the leader of a criminal organization called Targent. Like Jean Descole, Bronev wants the three legacies of the Azran Civilisation.

Leon Bronev was an archaeologist who specialized in the Azran civilization. He was the husband of Rachel and the father of Hershel and Theodore. He and his family lived happily in a village. When his sons were still young, Targent learned of his findings and kidnapped him and his wife, leaving Hershel and Theodore as orphans. His obsession with the Azran civilization led him to climb the ranks of Targent. His obsession only grew after the death of his wife. Eventually, Bronev becomes the leader of Targent.

To get the Mask of Chaos and the Mask of Order, Bronev took a room in the Reunion Inn, the hotel in which Jean Descole and the Masked Gentleman had established their hideout.

In the end, he captures Descole after he discovered the Infinite Vault of Akbadain with his private army and tries to unmask him. Suddenly, Descole's butler Raymond saves him by throwing a smoke bomb between the TARGENT agents. When the smoke's clear, Descole has disappeared and Bronev secures the ruins of Akbadain.

Bronev appears in a cave in the snowy town called Froenborg, after Professor Layton and professor Sycamore released a girl related to the Azran Civilization from an ice wall. He kidnaps the girl and takes her with him in his giant warplane.

In the end, he raises the Azran Dolls and has to redeem himself to stop them, as they want to destroy the world. He is arrested afterwards, alongside the remainder of Targent, by Inspector Grosky; as he did so, he apologized to Layton, calling him by his birth name, Theodore Bronev. Layton refused to answer by that name, saying he was called "Hershel Layton", and that Leon had no right to call himself a father. However, Layton then said that he hope one day he and Leon can become friends, regardless of their past. 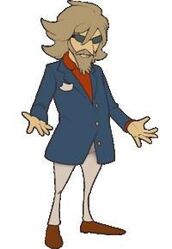 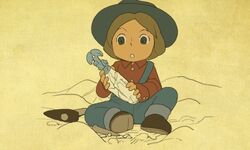 Leon Bronev as a boy

Leon and his family in the past before their lives were destroyed by Targent. 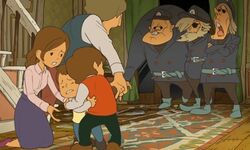 Leon Bronev and his family's tragic past 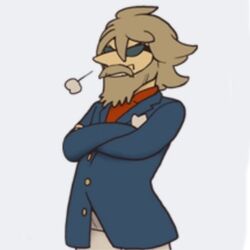 Professor Layton and the Miracle Mask - Scene 29 US

Professor Layton and the Miracle Mask - Scene 39 US