Kill virgins in order to convince the town's teenagers to have sex, therefore robbing the town of their children's innocence (nearly succeeded).

Mr. Leonard "Leo" Marliston is the main antagonist of the 2000 slasher film Cherry Falls. He is a local high school teacher in the town of Cherry Falls, Virginia who targets his students, including his half-sister Jody Marken.

He was portrayed by Jay Mohr, who also played Mack McCro in The Brave Little Toaster to the Rescue.

Leo's mother Loralee Sherman was a high school loner who was raped by four guys including Brent Marken (who would later grow to become Jody's father and the local town Sherrif) which results in her being pregnant and gave birth to Leonard. Lora become an abusive alcoholic, which caused Leonard to grow up hating his hometown of Cherry Falls. He began dressing in clothes and a wig to resemble his mother and started to kill the towns teenage virgins. He ultimately planned for the towns virgins to have a mass orgy to spare themselves, thereby getting revenge on the town by robbing the very people who wronged his mother by taking away the innocence of their children.

In the end, Leonard was killed by Deputy Sheriff Mina after Jody pushed him onto fence posts for killing their father. 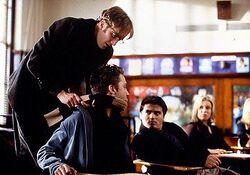 Leonard during the murders.

Leonard during the murders.
Add a photo to this gallery

Retrieved from "https://villains.fandom.com/wiki/Leonard_Marliston?oldid=3703476"
Community content is available under CC-BY-SA unless otherwise noted.