Member of The Order cult

Forcing his spiritual beliefs on other people.

Disagreeing with and beating his daughter Claudia over perceived beliefs.
Slaying those who turned their backs on God.
Protecting the Seal of Metatron.

Await Judgement Day and God's final judgement on the world.

Be with the worthy saved souls to enter an eternal Paradise.
Kill anyone who tries to steal the Seal of Metatron.

Leonard Wolf is a major antagonist in the game Silent Hill 3. He is a fanatical and often violent member of the Order whose teachings in his heart he still holds close, with absolute devotion. He is also the father of Claudia Wolf. He was voiced by Matt Lagan.

Leonard is a member of the Order but had a special role. It is not known how this came about, but Leonard was the protector of the Seal of Metatron. He differed from other members of the Order in that he believed Paradise would only be open to the chosen few, and that all the "useless" people would be denied entry. He supported these beliefs with often violent means, often beating and kicking his daughter Claudia over perceived blasphemies.

Leonard was committed to Brookhaven Hospital, a mental institute, after he stabbed a man in a religious dispute, but somehow managed to bring the seal with him. He was kept in the room S12 on the third floor. Leonard became known there for trying to force his religious beliefs on the staff and other patients. He may even have killed a patient named Stanley Coleman.

When Claudia manifested the Otherworld, Leonard was drawn in due to her immense hatred of him. He transformed into a monstrous figure and was held in a basement of sorts, keeping the seal with him. Heather Mason was directed to the hospital by Father Vincent, who wanted her to retrieve the seal, but did not tell her much besides that. She reached Leonard's room (S12), where the phone was ringing. Leonard was on the other end, and initially mistook Heather for Claudia. She convinced him that she wasn't and she wasn't on Claudia's side, so he directed her to a series of halls through the mysterious door on the second floor that led her into the Otherworld Brookhaven Hospital. When Heather reached Leonard's basement room, she told him that she didn't believe in God or Paradise, and Leonard attacked her, believing her to be a thieving heretic trying to kill him and take the seal. (She was, but was entirely unaware of that fact). Leonard was killed by Heather, and she retrieved the seal when she slipped back into the fog world.

In the Otherworld version of the Brookhaven Hospital, an optional memo can be found that contains a notebook entry apparently written by Leonard. It is covered with childish doodles depicting a figure wielding dual daggers, a winged Sun (possibly representative of the Order’s deity) and the bodies of the slain strewn about the ground. It gives the player an early clue as to Leonard’s true nature and his belief that non-believers do not deserve salvation. It is also possible that the diary was written by Claudia as a young girl, though the notebook's origins are unknown. Words of the notebook reads:

"The world is teeming with unnecessary people. It is God’s decision that I fight. As a knight of honor, as a protector of the seal, I sacrifice myself to the blood of criminals.".

To which Heather remarks;

"Who wrote this? Some twisted individual, eh? I see this and wanna ask him, So you think you’re one of the necessary ones?".

Leonard Wolf appears as a major antagonist in the 2012 film Silent Hill: Revelation.

He is portrayed by Malcolm McDowell who also portrayed Dr. Samuel Loomis in the remake of Halloween and its sequel.

Leonard is the father of Claudia Wolf and Christabella and the former leader of the Order of Valtiel, a fanatical cult that wanted to use Alessa Gillespie's body to birth their god. However, things went awry when the cult underestimated Alessa's powers after she was nearly burnt to death, leading her to split her soul and drag the entire cult into an alternate reality. Claudia and the Order eventually claimed that Leonard had become tainted by Alessa's evil, and they sent him to Brookhaven Asylum where he was chained down and abandoned after multiple attempts to "fix him". This led to tell-tale scars on the back of his head, and at another point in time, Rose Da Silva visited Leonard and stole half of the Seal of Metatron from him so that she could free her adopted daughter Sharon.

Vincent sends Heather Mason, the manifestation of the good side of Alessa's soul, to find Leonard. Heather approaches him with half of the Seal of Metatron, and asks him to give her the other half. Instead, Leonard shoves her half of the Seal into his body, where it automatically combines with its other half. He is immediately cured if his blindness and upon seeing the "truth" of Heather, condemns her as a demon and attacks her. Heather retaliates by shooting him, which knocks him back into the shadows, only to find moments later that he has morphed into a monster. Initially, Heather is overcome by Leonard in his new form, but she soon reaches into his chest and rips out the Seal, killing him almost instantly.

According to the official canon of the first Silent Hill movie, Christabella is the biological sister of Dahlia Gillespie, the mother of Alessa. This makes Leonard also the father of Dahlia, and grandfather to Alessa/Heather. It is likely that this is a retcon of the first film. 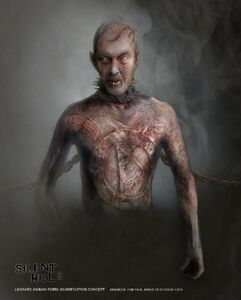 A concept artwork of the chained Leonard Wolf with seemingly symbolic scars resembling the a few certain symbols such as the Halo of the Sun by Martin Mercer.

Heather pointing a gun at Leonard

Leonard transforming into a monster

The face of Leonard's monster form in Silent Hill: Revelation. 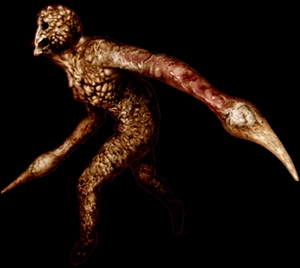