Win the gang war and take over the Liberty City underworld.(Succeeded)

The Leone Family is an Italian-American Mafia criminal organization, originating from Sicily (referred to by Salvatore Leone as "the old country") whose main base of operations is in Liberty City and villains in the GTA series.

Salvatore Leone became the Don of the Leone family after a bloody power struggle during the mid-1980s. He has a son, Joey Leone, who much to Salvatore's dismay is not wed yet. The Leones are clearly based off of the Corleone Family from The Godfather movie; this is also supported by their involvement in the gambling industry.

The Leone family was active in Las Venturas in 1992, where they held a stake in Caligula's Casino with the Sindacco and Forelli families, to unite the organizations into one mafia family. The casino was later robbed in a heist organised by former ally Carl Johnson and the Triads.

What happens after that is uncertain. At some point between 1992 and 1998 he abandoned his investments in Las Venturas and moved back to Liberty City.

By 1998, the Leone family had become engaged in a war with the Sindacco and Forelli families in Grand Theft Auto: Liberty City Stories. The hostilities lead to Salvatore being arrested, the death of the Forelli-controlled Mayor Roger C. Hole, the death of Sindacco family Don Paulie Sindacco and the destruction of Fort Staunton. The Leones also manage to tackle the Sicilian Mafia, led by Uncle Leone and Massimo Torini, making them the only mafia family with significant power in the city. The Leone family also recapture a club in the Red Light District, renaming it Luigi's Sex Club 7. They also gain new territories in the Red Light District and parts of both Hepburn Heights and Chinatown. However, these events lead to a weakening of the Leone family, with the Diablos and Triads moving onto Portland Island. Hostilities with the Yakuza also remain, as Toni had killed the Yakuza leader, Kazuki Kasen. Having failed to secure Donald Love as Mayor of Liberty City, they begin to control new Mayor Miles O'Donovan after rescuing him from the Sicilian Mafia.

In 2000, Yakuza co-leader Asuka Kasen employs Mike to extract revenge on the Mafia for the murder of her brother Kazuki. The Mafia presumably refers to the Leone family as the Sindaccos and Forellis are severely weakened following the events of GTA Liberty City Stories. She has Mike kidnap at least fifteen Leone Family gang members and sell them in Asia as servants. However they are sooned rescued following a raid of the re-taken over casino once owned by Kazuki, in which lead to Kenji Kasen another brother of Asuka taking over the casino and renaming after himself.

By 2001, the Leone family have lost some power in the city, although they remain one of the strongest crime syndicates in the city. Most of the territory they had gained in Chinatown is lost to the Triads whilst the Diablos have taken control of Hepburn Heights, as predicted by Toni Cipriani in 1998. This leads to shootouts between the Leones and the Triads around the Red Light District which is Leone Turf and Chinatown which is Triad territory The Colombian Cartel have also been undermining the Leone family, selling SPANK from the factory on freighter in Portland Harbor and through noodle stands. This sparks major hostilities in and around Trenton, the business place of Underboss Joey Leone, and also around Portland Harbour. The Leone Family first launch a full-scale war against the Triads. This leads to the death of three Triad warlords and the destruction of the Triads Fish Factory. The Cartel too are weakened with the destruction of their freighter in Portland Harbor. Whilst neither conflict with the Triads or Cartel is resolved, both appear to be going in the Leone's favour.

However, Salvatore's paranoia sets in when his wife, Maria Latore, tells him that she is in an affair Leone associate Claude. He rigs a car in order to kill Claude, although Maria informs Claude of this plot. The two meet at a small jetty with the co-leader of the Yakuza, Asuka Kasen, who has Claude kill Salvatore to prove that he has severed all ties with the Leone Family. It is unknown what happens to the Leone's after that, but they still appear in Saint Mark's and will attack Claude on sight. It is likely Toni Cipriani had taken over preccedings afterwards.

The official gang car of the Leone family is the Mafia Sentinel, a modified jet black version of the Sentinel. However, there are also uniquely jet black versions of other cars either used by the Leone family or located near their property in both GTA III and GTA Liberty City Stories. These include a Rumpo used by the Leones in Under Surveillance, a Pony used by Toni Cipriani in Taking the Peace, a Kuruma used by former Capo Vincenzo Cilli and parked outside his house, and a PCJ-600 parked outside Salvatore Leone's mansion. 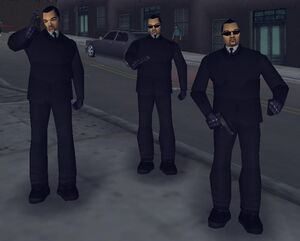 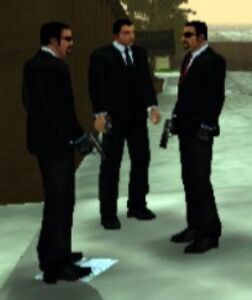 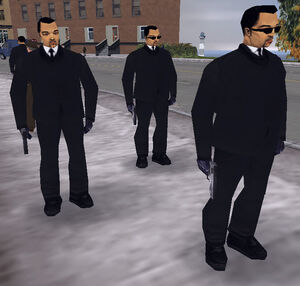 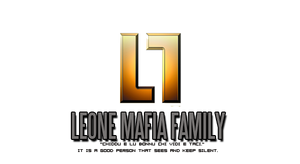 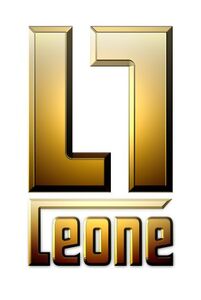 Retrieved from "https://villains.fandom.com/wiki/Leone_Family?oldid=4092594"
Community content is available under CC-BY-SA unless otherwise noted.