Ability to poison anything with his staff

Help Makuta to prevent the approach of the seventh Toa

Lerahk was one of the six Rahkshi that were released by the Makuta to stop the Matoran Takua and Jaller from finding the seventh Toa.

Lerahk was released by the Makuta along with Panrahk and Guurahk to stop the approach of the seventh Toa. He and his fellow Rahkshi attacked Ta-Koro in search of the Kanohi Avohkii (the Mask of Light). Lerahk was hit on the head by Turaga Vakama until Tahu decides to face him. Lerahk scratched Tahu's mask infecting it with poison. Lerahk, Gurrahk, and Panrahk then escaped Ta-Koro by using their staffs to fly.

Lerahk, Gurrahk, and Panrahk later tried to apprehend Takua and Jaller on Ko-Koro. However, they were intercepted by Kopaka, who froze them inside a nearby lake.

Some time later, Lerahk, Gurrahk, and Panrahk managed to break out of the frozen lake and join Turahk, Vorahk, and Kurahk. The six Rahkshi assembled at Kini-Nui, where they gave chase to Takua and Jaller. The six Toa Nuva arrived and were able to defeat the Rahkshi. 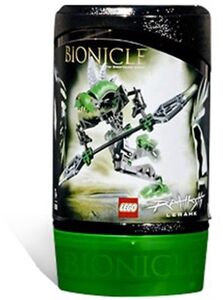 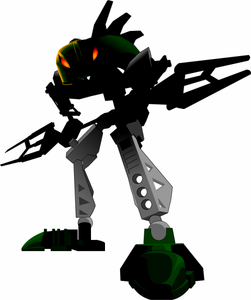 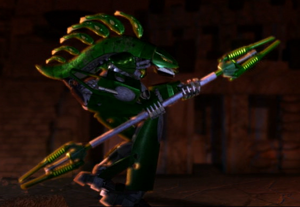 Lerahk in BIONICLE Mask of Light: The Movie.