Killing people and taunting his enemies.

To become a friend of the Wolfpack (The whole franchise; succeeded).

He was portrayed by Ken Jeong who also played King Argotron in Role Models, Neil Lyman in Furry Vengeance, Ben Chang in Community, Mr. Greene in Norm of the North, and Sprout Cloverleaf in My Little Pony: A New Generation.

Chow first appeared in his 40s after Alan, Phil, and Stu heard banging noises coming from the trunk of their car and stopped the car to open the trunk. Chow jumped out of the trunk naked and began to hit all of them. Chow then asked Alan "You going to fuck on me?" which implies that Alan raped Chow. There was also a condom seen in the car before Chow jumped out of the trunk which confirms that this did happen. Chow escapes while still naked, leaving the Wolfpack wounded after violently attacking them.

Chow later appears when he and his two goons rear end the Wolfpack's car. Chow gets out of his large black car wearing cloths and asks for the Wolfpack to get out of their car. After his goons force the Wolfpack out of their car, Chow demands that they give him back his purse which had $80,000 inside. His minion explains that Chow won somewhere between $79 and $80 thousand dollars worth of casino chips from shooting craps at the Bellagio, but Alan stole the purse with Chow's chips inside. Chow came after Alan and ordered his purse back but Phil excitedly threw him in the trunk calling him his "lucky charm". After telling of missing their friend Doug and not remembering anything that had happened the previous night, Chow makes a deal with the Wolfpack to bring him $80,000 to the desert at dawn in exchange for Doug who Chow claims to have captured.

After a night of gambling to make the money to give Chow, Alan, Phil, and Stu bring the money to Chow in the desert. It is this point in the film that Chow reveals his name as "Mr. Chow". Chow asks for the Wolfpack to throw over his money before giving them Doug. They throw over the money to Chow and he gives them Doug who is actually revealed to be a different Doug who sold Alan the drugs (roofies) that caused the Wolfpack's hangover. Phil demands Chow to give them back the money and just keep the wrong Doug as his hostage again (much to the dismay of the wrong Doug). But, Chow tells them that it is not his problem and tells them to suck on his "Little Chinese nuts". Chow and his goons drive away not to been seen again in the film before the ending credits showing Chow was with the Wolfpack at the casino.

Mr. Leslie Chow is 42 years old. He returns as a friend of the Wolfpack. Chow, offscreen, unknowingly stows away in the Wolfpack's plane to Thailand after realizing that they forgot him, crashes the party without being seen, and falls asleep. He makes his real first appearance in the film when the Wolfpack notices a mushroom-like thing sticking out of the bed.

The monkey, discovered by the Wolfpack after their second hangover, starts slapping at it and it is revealed to actually be Chow's penis when he wakes up from the bed and says "Tell that gay monkey to leave my shit alone!". Chow then asks Alan for his pants and starts talking about things that the Wolfpack does not remember after their hangover. Chow then seems to drop dead and sure enough, Alan, Phil, and Stu think that he is dead and try to hide his body in an icebox.

Later on in the film, after the rest of the Wolfpack free Chow from the icebox, it is revealed that Chow was not dead and claims to have problems of having his heart stop and start back up again. He also asks when someone says they had a bad day if they died. Soon afterwards when the Wolfpack tries to steal the monkey back, the monkey alerts two of the thugs and a chase begins with Chow driving the car. Chow and the others leave the monkey on a doorstep after the chase and soon meet with a man named Kingsley who reveals himself to be a police officer which leads to Chow's arrest. While being arrested, Chow uses one of his typical quotes "Toodaloo mother--kas!".

Mr. Leslie Chow is 44 years old. He returns with his biggest role yet, being the secondary antagonist. Chow escapes prison by using a riot as a cover up. After a mob leader named Marshall demands the Wolfpack to bring Chow to him, it is revealed that Chow stole half of the gold that Marshall tried to steal and killed the drivers of the truck transporting the gold. In this case, Chow posed as a police officer and shot them.

Chow later appears in the film in Mexico where he asks Alan to meet him, but only if he comes alone. During this time, Chow makes a living by using cocaine-enhanced chickens to win almost every chicken fights in the area. It is later revealed that he also forced his chicken to commit cannibalism. Chow then notices Phil and Stu in the car while he is talking to Alan and demands to know why they really wanted to meet with him. Chow is later seen in a bar where he sings a song for what is seemingly karaoke entertainment at the bar. This reveals that Chow is clearly a terrible singer. Chow then sits down at a table with the rest of the Wolfpack where they try to drug him by putting a drug in his beer. Chow smells the drug in his beer and threatens to cut Stu's vein if the Wolfpack does not tell Chow why they tried to drug him. It then comes to Chow's knowledge that the Wolfpack is actually working for Marshall.

Chow and the Wolfpack later meet at his apartment where they plan to steal back the gold that Chow stole from Marshall, which is, according to Chow, hidden in his former mansion home in Mexico. Chow and the Wolfpack drug the mansion's guard dogs and cut the alarm wires to get to the gold that Chow hid. The Wolfpack gives Chow all of the gold. However, Chow then locks the rest of the Wolfpack in the basement, escapes with the gold, and sets off the alarm, leaving the Wolfpack to be arrested. Marshall later bails them out and explains they were being duped by Chow to break into his house and steal his remaining golds. After executing Black Doug for incompetence, Marshall gives them two-day deadline to retrieve his golds.

The Wolfpack later tracks Chow to Caesar's Palace in Las Vegas, where Phil and Alan break into his room and attempt to drug him with a syringe. Chow attacks Phil and Alan and jumps from the balcony. Chow then deploys a parachute and attempts to escape, only to land on Stu's limo. Stu stops the limo, throwing Chow to the ground after hitting a fire hydrant. At first, Chow appears dead, but survives. Stu locks him in the truck of their limo and the Wolfpack meets with Marshall to give him the gold Chow stole, which Phil and Alan took from Chow's room in Caesar's Palace. After hearing that Chow blew the first half of gold in Bangkok, an enraged Marshall shoots at the truck of the limo, presumably killing Chow. Chow then shoots Marshall and his men, killing them. Chow prepares to shoot at the Wolfpack, but changes his mind because Alan unlocked the trunk in the limo, giving Chow a fighting chance. The Wolfpack then departs with Chow left disgusted that Alan no longer has interest in being his friend.

In an end credits scene, it reveals that Chow sent a cake to Alan's wedding and the cake happened to be laced. Alan and the gang wake up back in a destroyed Caesar's Palace. Stu seems to have gotten breast implants. Chow walks out of a room, naked, saying "We had a sick night, bitches!" before laughing maniachly.

This means that Chow is again a friend of Alan and the "Wolfpack" and also that he will probably rebuild his criminal empire with Marshall's gold. 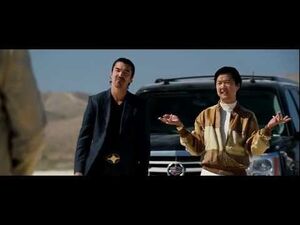 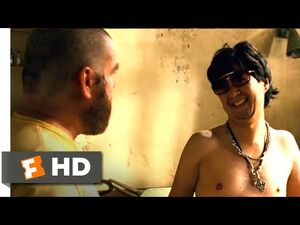 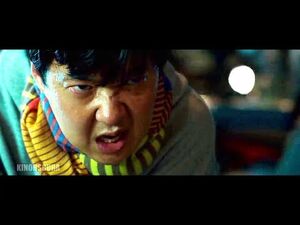 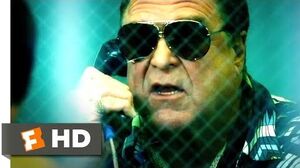 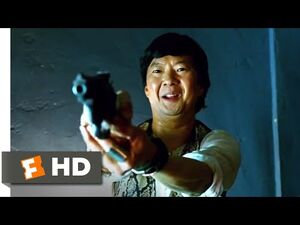 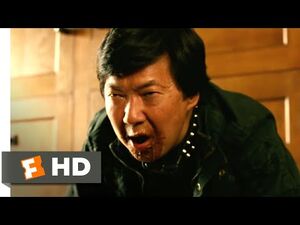 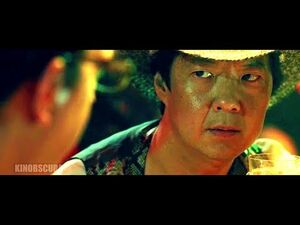 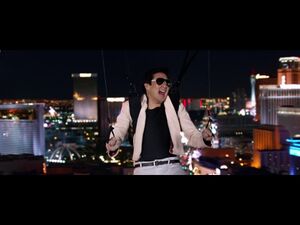 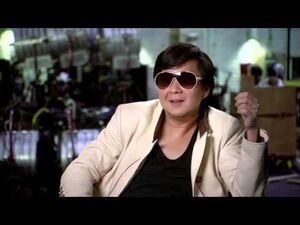