Behind the Mask: The Rise of Leslie Vernon

Leslie Vernon (real name Leslie Mancuso) is the titular main antagonist (as well as the main protagonist) of the 2006 mockumentary horror film Behind the Mask: The Rise of Leslie Vernon.

He was portrayed by Nathan Baesel.

Leslie was born and raised in Reno, Nevada. There is very little information available concerning Leslie's early life, but it is believed that he began to develop homicidal tendencies at a very young age. As a child, Leslie took therapy sessions from a man named Doctor Halloran.

As he grew older, Leslie wished to pursue a career as a serial killer, patterning himself after the immortalized legendary slashers of old such as Jason Voorhees, Freddy Krueger and Michael Myers. He knew that Doctor Halloran would attempt to stop him, so he took out a restraining order against him.

Years later, a female journalist named Taylor Gentry and her two cameramen, Doug and Todd, document the preparations of Leslie Vernon as he prepares to join the ranks of other slasher villains. Leslie takes his identity from an urban legend about a boy who killed his family and was cast into a river by angry townsfolk.

He initially claims to be the vengeful spirit of the slain boy, but soon admits that he is an ordinary man named Leslie Mancuso who must rely on conventional tactics rather than supernatural powers. Taylor and her crew film Leslie's meticulous preparations to slaughter a number of teenagers in an abandoned house and then be confronted by a virginal "survivor girl", Kelly. Taylor and her crew come to share Leslie's enthusiasm for his project, but their consciences catch up with them on the night of the murders.

They beg Leslie to call off his killing spree, but Leslie is adamant, believing that his survivor girl will define herself by facing him. Taylor and her crew abandon their documentary and at this point the film shifts from a documentary style to a traditional horror movie presentation. Taylor attempts to warn and rally the remaining teens together to fight Leslie, but Leslie's preparations repeatedly give him the upper hand. The group looks to Kelly for leadership, but she unexpectedly dies.

Taylor quickly realizes that, as a virgin herself, she was Leslie's true survivor girl all along. Leslie continues picking off the group one-by-one until only Taylor remains. She faces Leslie and defeats him in the exact manner he had laid out for her, then burns down the shed in which he was defeated. She then runs into Doug and Doc Halloran who survived their encounters with Leslie. However, Leslie's preparations included learning to feign death and slathering himself with flame-retardant gel.

Over the final credits, security camera footage reveals Leslie's charred body sitting up on an autopsy table, still alive, accompanied by the song "Psycho Killer" by The Talking Heads. 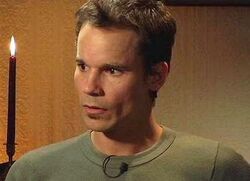 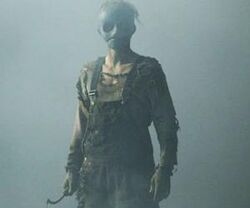 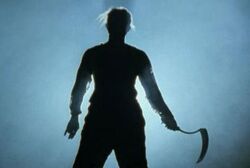 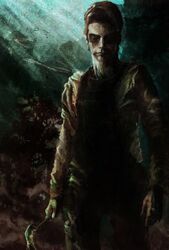 An artwork of Leslie Mancuso aka Leslie Vernon.
Community content is available under CC-BY-SA unless otherwise noted.