Creating and transforming herself into electricity

Initially an employee of CatCo, Leslie is struck by lightning while inside a traffic chopper. Instead of dying, however, Leslie gains the powers to create and turn herself into electricity. After realizing the true extent of her powers, Leslie intends to get revenge on Cat but is stopped by Supergirl. She is later busted out of prison by Silver Banshee, who teams up with her to once more attempt to kill Cat. This time, the two are foiled by Supergirl and the Flash. She was killed by Reign in season 3.

She is portrayed by Brit Morgan.

Leslie Willis is a famous, well-known radio shock jock presenter, working in the basement of CatCo Worldwide Media. When Leslie rants about Supergirl in her show, insulting her and making jokes about her sexuality, she is called before Cat Grant. Grant forbids her from continuing her slander campaign but Leslie tells her that Cat won't dictate her what to say. This causes Cat, who can't fire Leslie because of her contract, to tranfer Leslie to a traffic chopper.

On Thanksgiving night, Leslie is in the chopper monitoring the traffic. However, the weather grows into a storm quickly and the helicopter is hit by lightning, causing it to spin out of control. Supergirl arrives to save the helicopter, at first grabbing the pilot who had been blasted out of the helicopter. After delivering the man safely to the ground Kara flies back up to save Leslie, who is still inside the chopper.

After preventing the helicopter from crashing into a building, Kara tells Leslie to grab her hand but while she does so, Kara is struck by lightning which is diverted into Leslie. This lightning strike throws Leslie into a coma but also gains her the ability to create electricity.

Cat and Kara later visit Leslie at the hospital. Although Cat at first acts like she doesn't care about Leslie's fate, she urges the comatose woman to wake up after Kara has left the room. Once Grant is gone too, Leslie opens her eyes which are now sparkling from electricity. She sneaks out of the hospital, entering a back alley where she accidentally shoots a bolt of lightning out of her hand. She is approached by a drunk man who starts molesting her. She ends up electrocuting him to death and after a brief moment of shock, enjoys her powers. Laughing, she transforms into electricity and leaves the alley through a street lantern.

Intending to get revenge on Cat, Leslie heads tp CatCo where Grant is working despite the holiday. Leslie draws the power from the building, causing an annoyed Cat to call Kara for aid. Once Kara has arrived, Leslie contacts both through the monitors inside Cat's building. Both are shocked to see Leslie's face but the woman claims that Leslie died in the helicopter and that the two are facing Livewire. She then leaves the screen, arriving right in front of Cat and Kara and shooting electricity at them. The two women flee into the offices and Cat remains to distract Livewire while sending Kara to get security. Kara flees from the room but returns as Supergirl just in time to save Cat from a deadly electricity blast. While Car flees from the rooms Kara fights Livewire who enters the elevator mechanism intending to have Cat drop to her death. Kara stops the elevator however.

Blaming herself for Livewire's condition, Cat later contacts Supergirl and offers to team up with her to take down Livewire. The same night, Cat uses Leslie's former radio station to lure her in, claiming that she will be waiting "where it all began". Leslie indeed turns up. Cat asks for Livewire's terms but Leslie merely states that she want's Cat's ski, quipping that there are many ways to skin a cat. This prompts Cat to state that Leslie has the wit of a Youtube comment. Furious, Leslie blasts an electricity blast at Cat but Cat manages to jump out of the way. Supergirl then appears and fights Leslie. During the fight, Leslie creates two whips consisting out of pure electricity which she uses to trap Kara. She then knocks Kara on the ground and electrifies her, wondering if she has enough power to stop Supergirl's heart. Kara then uses the rest of her strength to punch through the asphalt into a water pipe, spilling the erupting water onto Livewire and knocking her out in an electric blast.

Teaming up with Silver Banshee

Livewire is imprisoned at the DEO. During her own brief trip to the DEO, Siobhan Smythe takes a glimpse at Livewire in her cell, threatening to kill Cat Grant and Supergirl should she ever get out of her cell. After Siobhan turns into Silver Banshee, she breaks into the DEO and frees Livewire, intending to team up with her to take down Cat and Kara. When she then approaches Livewire, Leslie is unrespectful at first but then listens to Siobhan's proposal. Livewire agrees with Siobhan but claims that Siobhan needs a villain-makeover first.

Leslie and Siobhan lay a trap for Kara to follow, luring her into an abandoned warehouse. Once Kara and Barry Allen, the Flash, arrive, Livewire welcomes the two. Barry speeds fast enough to throw lightning at her but the electricity only charges Leslie. A fight breaks out between the four which leaves no clear victor. Leslie and Siobhan manage to escape.

Livewire manifests in Cat's office hours later, accompanied by Siobhan who is forced to take the elevator. Leslie uses her lightning on Jimmy Olsen when he tries to talk the police. The two manage to capture Cat and bring her to city park, later inviting Supergirl and the Flash to join them. While waiting, Livewire wreaks havoc by using her powers on everything in her close vicinity. When Barry and Kara arrive and prove to be immune to Siobhan's scream due to earpieces invented by Barry, Siobhan tells Livewire to deal with them. Leslie fires an electricity bolt but is thrown down by Barry. Turning into electricity, Leslie flees onto a nearby roof but is pursued and confronted by Barry. By creating an electric shield, Leslie is able to knock out Barry when he is about to attack and she joins Siobhan on the ground moments after.

When she sees a police helicopter flying over the scene, Leslie unleashes a massive bolt of energy but Supergirl positions herself in front of it. Witnessing this, the people of National City shield the weakened Supergirl from Leslie who then decides to kill everyone around. Using her energy, she blasts himself in the air but is caught by surprise when fire brigade members use their hose and spray Leslie with water. Leslie is electrocuted and falls to the ground twitching which in turn causes Siobhan to be hit by Leslie's electricity as well. After both women have passed out, they are imprisoned in the newly built prison facility for meta-humans. 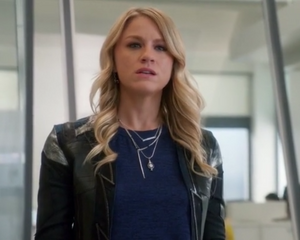 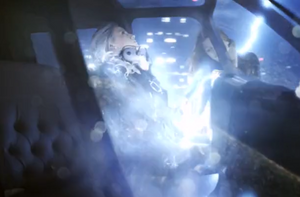 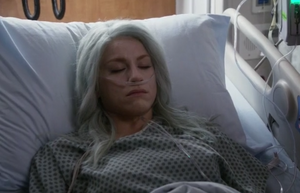 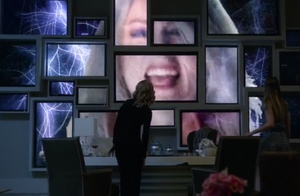 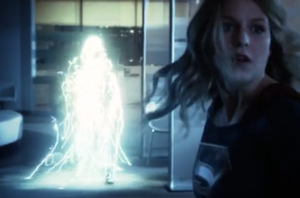 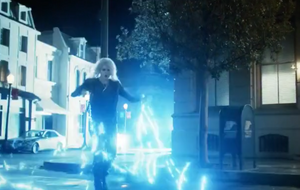 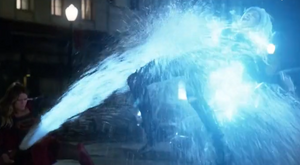