Interview With the Vampire: The Vampire Chronicles

Feeding on humans for sport.

Convince Louis to stay with him.

He is an elegant, wealthy, fairly charismatic and energetic vampire of French descent with a fiery temper and several sadistic tendencies who has lived an immensely long and chaotic life.

Interview With The Vampire

Queen of The Damned

The Tale of The Body Thief

Prince Lestat & The Realms of Atlantis

Interview With The Vampire

In the beginning of the film version of Interview with the Vampire, Louis is suffering from a death wish in Louisiana, and Lestat ends up turning him into a Vampire. When Louis refuses to harm humans and drinks animal blood, Lestat ﻿grows furious with him, and soon, Louis burns down the home they lived in.

Later on, Louis came across a young girl, Claudia, with her dead mother, and bites the girl, supposedly killing her. Lestat appears in the doorway to the room and chuckles, seeming to praise Louis. Angry, Louis leaves the house, and Lestat shouts after him, 'You are who you are!' while Louis runs off.

Soon after, Lestat ends up back again with Louis in a room where Claudia laid on a bed, barely alive. Much to Louis' dismay, Lestat cuts his wrist and allows Claudia to drink his blood, causing her mortal death and then turning the young girl into a Vampire and feeling no remorse-but he only turned Claudia into a Vampire to discourage Louis from leaving him.

He and Louis then raise Claudia as their own, but she stays in the form of a child for thirty years before she starts asking questions and sees a beautiful woman in a window, asking Louis if she can be like her one day, which angers Lestat and makes him even furious when he finds a long-dead corpse in Claudia's bed.

Eventually, Caludia and Louis plan against Lestat, and the young girl kills two young boys about her age and gives them to Lestat, who remarks that her very presence irritates him. When he sees the two dead boys, he asks, "We forgive each other then?" and Claudia nods slowly, smiling, and replies "Yes." Convinced, Lestat drinks the blood of the two boys, only to suddenly grow weak with a drunken appearance. He realizes that Claudia killed the boys absentmindedly, and that he had drank dead blood. He calls weakly for Louis to put him in his coffin, and Claudia takes out a knife and moves behind him, remarking, "I'll put you in your coffin!" and slits Lestat's throat, causing blood to spill onto the ground. Louis comes at that moment, shocked and horrified at this, while Lestat slowly and eventually dies.

But, Lestat makes another appearance soon after this, when Claudia and Louis are together in their home waiting for a carriage to pick them up. The doorbell rings, and when Louis answers it, no one is there-but an arm suddenly grabs him around the neck, attempting to pull him out, and Louis escapes, running into the house while Claudia screams for him.

They run into the nearest room, only to gasp at the sight before them-a decayed Lestat playing the piano by an open window-alive. As he slowly explains that he had survived on the diet of the 'putrid life of the Mississippi', before raising his head and looking directly at Claudia, remarking, "You're been a very...very...naughty little girl." Lestat then attempts to attack Claudia, but before he can, Louis throws a fire-lit candle at Lestat, and the Vampire gets caught in the flames, screaming and shouting with pain and agony while both Louis and Claudia escape, running out of the house and getting onto the nearest ship before the fire spreads and burns the whole town.

Lestat then reappears at the end of the film, when society was now modern, and when Louis lived in New York after Claudia is burned to death in the middle of the film. Louis finds Lestat in a rugged old shack, trembling and drinking rat blood while a helicopter light shines in through the broken window. Frightened, Lestat attempts to hide from the light, but Louis calmly tells him that it was false light. After a brief conversation, Louis leaves Lestat without another word.

Lestat's final appearance is at the very ending of the film, where the interviewer having interviewed Louis in the beginning of the film is running and gets into his car, driving onto the highway after Louis attacks him and nearly chokes him to death out of fury. While driving, the interviewer puts the tape of Louis' recorded story in the radio, and listens to it as he drives, but he is suddenly yanked back and the car steers out of the control for a moment while the interviewer is bitten on the neck and left on the side seat of the car-while Lestat calmly takes the car steering wheel and casually drives, remarking that he had to 'listen to that for centuries', and turns music on the radio. When Lestat reaches for the interviewer, he flinches away, but Lestat slowly says, 'Don't be frightened. I'm going to give you the choice...I never had."-which is about the same of what Lestat had told Louis before turning him.

Queen of The Damned

In this film loosely based on the second and third instalment of the books Lestat appears as the main protagonist. 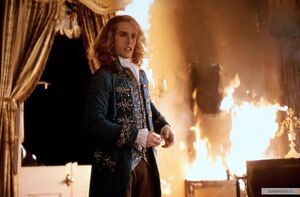 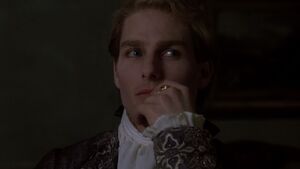 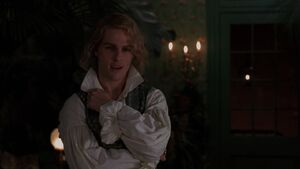 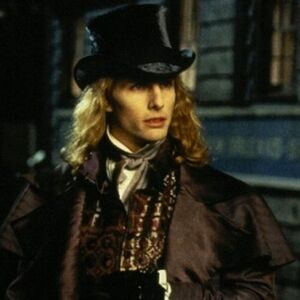 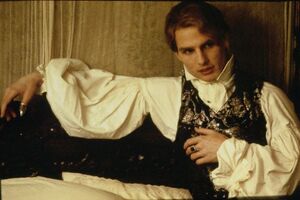