Leader of the Angels of Death motorcycle club

Lester Arnold is the unseen overarching antagonist in Grand Theft Auto IV: The Lost and The Damned and a recurring minor antagonist in the series.

Lester Arnold was born in 1962 to unknown parents. At some point, he took over as president of the Angels of Death Motorcycle Club from the previous unknown founder. He was arrested many times in his life, such as meth use in 1988, assault in 1989 and 1992, heroin use in 1993, and identity theft in 2005. In 2008, he wrote a book titled "Angels of Life" about his time as leader of the Angels of Death Motorcycle Club.

Lester is never mentioned in GTA IV, or even in The Lost And The Damned despite being the president of rivals The Lost MC, but his LCPD database record can be pulled up on any police computer.

By 2009, Lester has a girlfriend named Meredith, but she frequently cheats on him with private investigator Lester Lecroc, who infiltrates the gang with the help of Huang Lee. However, taking drugs and bike riding is too much for his initiation and Lee takes over for him by doing several bike stunts, attacking The Lost MC to not gain suspicion, and selling drugs.

After Lester Lecroc has sex with Meredith one last time, he learns that the gang didn't sabotage The Liberty City Triads. Lester's relationship with Meredith after this is unknown, but it can be assumed he killed her for cheating on him and giving away gang secrets.

During a random event with either Franklin Clinton or Michael De Santa, a member of The Lost MC who killed a LSPD Officer tells one of them that the Angels of Death are "finished", having no more chapters anywhere in the United States. If this is true, this means that Lester has either been arrested, killed, or is currently in hiding. Either way, his current whereabouts are unknown. 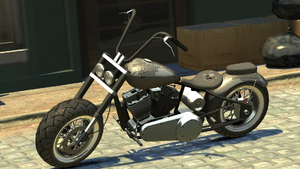