Lester the Molester (by Trevor Phillips)

Have Michael assassinate Jay Norris.
Have Franklin assassinate five people to help reduce stock market prices.
Help Franklin, Michael, and Trevor kill Weston and the other criminals who double crossed them (all succeeded).

Lester Crest is a fictional character of the Grand Theft Auto series. He appears as the central deuteragonist in Grand Theft Auto V and a main character in Grand Theft Auto: Online. He is an old and crippled friend of Michael De Santa and helps him throughout his criminal career, including his heists which often involves their associates Trevor Philips and Franklin Clinton as well.

Lester Crest is a criminal and a long time friend of Michael De Santa and Trevor Philips, being a regular member of their heist crews since the start of their partnership, working mostly as the crew's planner and information scout for the upcoming heists. Lester was also involved with stock fraud and corporate assassinations for a large chunk of his career.

In Grand Theft Auto Online, Lester will eventually give the player a phone call to see him at his house. He informs the player of their growing reputation and suggests to invest money in the real estate. Lester will give the player several missions and provide them with various services via the phone.

In Grand Theft Auto V, after Michael faked his death with the assistance of FIB Agent Dave Norton, Lester left North Yankton to relocate at San Andreas, eventually discovering himself that Michael had faked his death and gone into witness protection with the FIB in Los Santos. The duo reunite after Michael needed to start his heists again after having problems with Martin Madrazo after his house was pulled off a cliff. Lester agreed to help him gain money but Michael first had to assassinate Lifeinvader CEO Jay Norris so that Lester can make a profit by buying Lifeinvader shares at minimal price, only to sell them at inflated ones later. Once this is finished, Lester promises he'll help Michael and his new ally, Franklin Clinton, pull off a robbery at the Vengelico Jewel Store which is located in Portola Drive.

Throughout the game, Lester will help the protagonists in the heists and help them in it's set ups. He helps the characters plan out a robbery on a County Bank to finance an FIB operation. He also helps Franklin rescue Michael after he was captured by the Los Santos Triad. Lester then helps carry out a break in on the FIB headquarters to delete files about the team and Agent Steve Haines. He then helps the trio rescue Franklin's best-friend Lamar Davis from Ballas after the latter gets betrayed by his old acquaintance Stretch. Afterwards, Lester then finally helps the three main protagonists rob their final and most daring heist - The Union Depository. In addition, he tasks Franklin with assassinating certain people to help reduce stock market prices, including Brett Lowery, the CEO of Bilkington Research, 4 jurors who wanted to file a class-action lawsuit against Redwood Cigarettes, Jackson Skinner, the head of product development at Facade, Isaac Penny, a motor capitalist who wanted to purchase a vast majority stake in Vapid Motor Company, and Enzo Bonelli, a Mafia member who bullied his way into half the construction sites in Los Santos, including Gold Coast Development.

Towards the end of the game, Franklin is given separate orders to eliminate one of his two companions; Haines wants Franklin to kill Trevor, whereas illegitimate business tycoon Devin Weston demands Franklin to kill Michael. In Ending A, Lester claims his disappointed in how things went and splits Trevor's share from the the final heist between Michael and Franklin. In Ending B, Lester says he hopes neither Franklin and Trevor have anything to do with Michael's murder and gives his share from the heist to his family.

In Ending C, Franklin contacts Lester and asks for help about that he has to rather kill Trevor or Michael. At first Lester is out of options other than killing Michael or Trevor, but then manages to come up with a better idea. Lester lures Haines' corrupt FIB Agents and Weston's private very own Merryweather battalion of soldiers to a foundry where the trio along with Lamar must take them all out. Afterwards, Lester acquires the locations of all the protagonists' enemies - allowing them to finally kill all of their enemies. Michael finds and manages to kill Stretch then escape the Ballas, Franklin kills Triad kingpin Wei Cheng at a beach club, and Trevor assassinates Steve Haines at the pier. Trevor then kidnaps Weston from his mansion and proceeds to takes him to a cliff in Blaine County, then waits until Michael and Franklin arrives before the trio push the car his been stuffed in off a cliff - killing Weston. After this is all finished and the enemies are finally dead, Lester sends all three protagonists their respective shares and congratulates them.

In Grand Theft Auto: Online, Lester can be called to carry out a number of his services he can provide the player with: 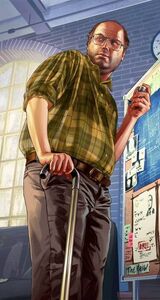 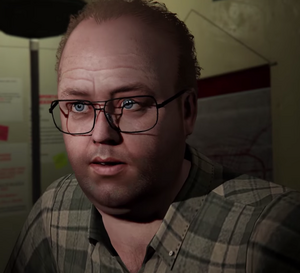