Villains Wiki
Register
Don't have an account?
Sign In
Advertisement
in: Mature, The Cleveland Show Villains, Xenophobes,
and 28 more

Xenophobic dimwit
Lester Krinklesac is a major character and recurring anti-villain from the FOX animated TV series, The Cleveland Show. He is a redneck hillbilly, who lives across the street from The Brown-Tubbs family and a member of The Guys. Lester is characterized as being openly racist, misogynistic, and homophobic, and is guilty of animal abuse, child mistreatment, and rape. Lester is also a member of several racist organizations, such as the Ku Klux Klan, and a firm believer/enforcer of the Confederacy.

He is voiced by Kevin Michael Richardson, who also voiced the Joker in The Batman, Goro in Mortal Kombat, Sarevok Anchev in Dungeons & Dragons: Baldur's Gate, Captain Gantu in Lilo & Stitch, Trigon in Teen Titans Go!, Shredder in the 2012 Teenage Mutant Ninja Turtles animated series, Carlton Duquesne in Batman: Mystery of the Batwoman, Floronic Man in Batman and Harley Quinn, Crunch Bandicoot in Crash Bandicoot, Temutai in Kung Fu Panda: Legends of Awesomeness, Tartarus in Halo 2, Prince John in House of Mouse, Skulker in Danny Phantom, Gorilla Grodd and Captain Cold in Lego DC Comics Super Heroes: Justice League vs. Bizarro League, Chairman Drek in Ratchet & Clank, Doug the Pimple in Family Guy, Black Samurai in Scooby-Doo! and the Samurai Sword, Ian the Gator in The Princess and the Frog, and Jabba the Hutt in Star Wars: The Clone Wars.

Lester Krinklesac made his first appearance in the pilot episode of The Cleveland Show, where he fired a warning shot at Cleveland and Junior, after seeing them go into Donna's house. In shock, Cleveland and Junior turned to see Lester standing there, in his redneck front yard, holding a rifle in his hands, warning Donna that a couple of "blackfellas" were following her home, before remembering the fact that she too was also black. This rather unorthodox encounter turned into Lester's greeting with Cleveland. Lester introduced himself to Cleveland as the neighbor who lives across the street from Donna and Cleveland took the exhibition of his blatant racism as a sign that he's back in the South again.

Lester later showed up at The Broken Stool with Cleveland, Tim, and Holt, when Cleveland cried over the fact that Donna was getting back together with Robert again. Lester figured out that Cleveland was still hot on Donna, despite Cleveland's constant denial of this. After Cleveland left, Lester expressed surprise in the fact that a black man would ever be brought to tears, as he previously thought they just got more pissed off. This was a callback to something that Peter Griffin said, earlier in the episode.

Finally, Lester, along with the other guys showed up at the wedding of Cleveland and Donna, applauding their beautiful marriage. Lester was surprisingly accepting of a black person becoming their new best friend.

In "Da Doggone Daddy-Daughter Dinner Dance", Cleveland accidentally ran over and killed Rallo's pet dog, Meadowlark Lemon. Lester witnessed this and asked him why he did this, assuming he did it on purpose. Cleveland said that it was only an accident and he didn't want Rallo to know his dog was dead. Lester offered to help Cleveland dispose of the body by taking it home with him and eating it for dinner. Lester dragged the dog in and told his wife, Kendra that they were having Chinese for dinner tonight.

In "The One About Friends", Lester's son Ernie spent most of his time at The Brown-Tubbs House and drove Cleveland crazy. Cleveland brought Ernie back to Lester's house and told Lester to take his son back. Lester asked Ernie where he would rather live and Ernie said he'd rather live with The Brown-Tubbs Family and Lester simply allowed it without asking any questions, leading to Ernie spending more time with Cleveland and Junior.

Cleveland called Child Services to tell them that Ernie was no longer with his family, hoping they would send him back home permanently. However, Child Services took one look at The Krinklesac House and immediately took Ernie away to live with a foster family, now seeing how horrible of a family he lived with. Lester came out of his house and cursed Cleveland for calling Child Services on his son.

Cleveland tried to make things right by going down to the home of Ernie's foster parents and politely ask for him back. However, Lester had different plans. He rounded up a group of his racist hillbilly friends to drive a pickup truck down to their house and attack the foster family in rapid gunfire so they could kidnap Ernie and take him back. Cleveland helped Lester by grabbing a gun and shooting down a chandelier to crush the foster parents and trap them under the weight. The foster parents were scared of Lester and the hillbillies and agreed to sign away the rights to Ernie just to give him back to Lester and get him off their backs.

Lester is a repulsive, poorly groomed, redneck hillbilly. He has long, dark blond shoulder-length hair, and a big mustache. He has missing teeth and a large, protruding beer belly. He wears a dirty white wifebeater as an undershirt, under a torn up cowboy jean jacket. Just above his wifebeater collar are a trio of unkempt and unshaven chest hairs. He wears ragged blue jeans, held up with a brown belt, and also has black shoes with gray outsoles.

Lester is basically the embodiment of the epitome of racism. Despite one of his friends being, Cleveland Brown, Lester still makes openly offensive and rather vituperative remarks about him on occasion. He has also been known to mistreat and victimize other black people as well as people of other races. He is even hinted to be a member of the Ku Klux Klan.

Outside of villainy, Lester is a stupid, brainless unemployed, and an illiterate person without a job or scholarly education. He is unqualified for getting a real job, so he lives in a crappy, run-down house, with no electricity or running water. He hunts animals for food and lives among a bunch of rats and filthy rodents, with his fat wife and inbred son. 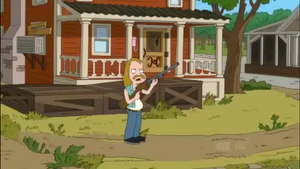 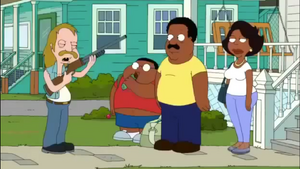 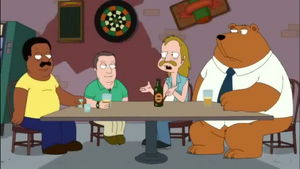 Lester with The Guys. 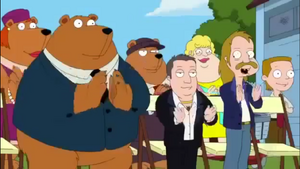 Lester at Cleveland and Donna's wedding. 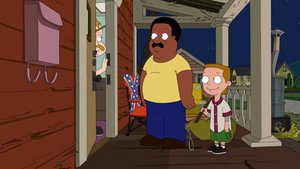 Lester allowing Cleveland to get full custody of Ernie, without batting an eyelash. 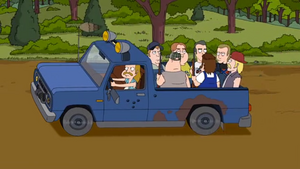 Lester driving around his crew of Hillbilly Rapists. 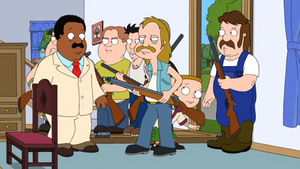 Lester and his army breaking into a family's home. 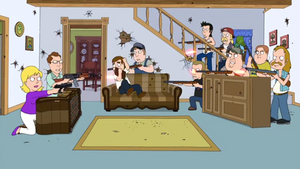 Lester and his army killing Ernie's foster parents and a child services agent in an open gunfire. 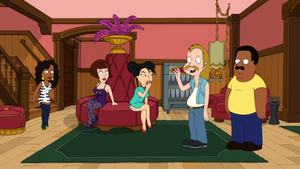 Lester going to his regular whorehouse, where he constantly cheats on his wife. 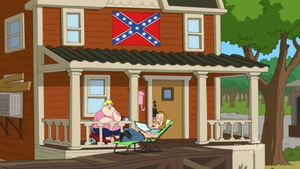 Lester showing off his confederate flag during Black History Month. 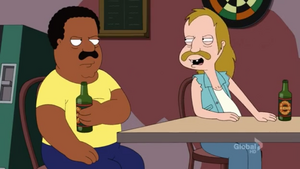 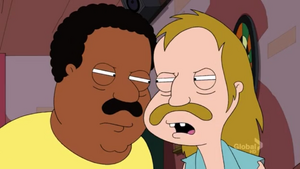 Lester and Cleveland hating each other. 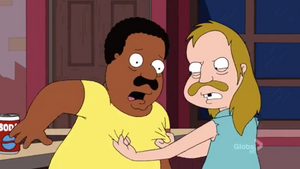 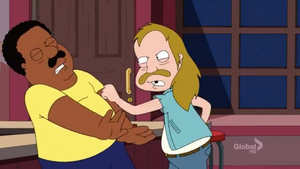 Lester punches Cleveland in the face. 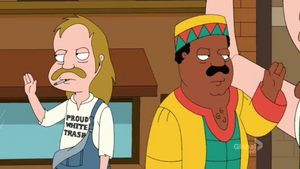 Lester and Cleveland being forced to get along as a court-ordered act of black and white racial harmony.

Lester, portrayed by a celebrity impersonator. 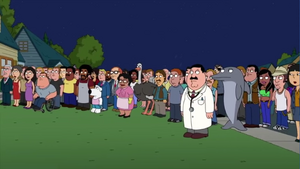 Lester's cameo in the Family Guy episode, "No Giggity, No Doubt".