Cycle of the Werewolf

Doing the god's work by Killing those whom he sees as corrupt and immoral.

Kill people who he considers as depraved.

Reverend Lester Lowe is the main antagonist in Stephen King's novella Cycle of the Werewolf and the 1985 film adaption Silver Bullet.

He is portrayed by retired actor Everett McGill (he briefly returned to reprise his old role of Big Ed Hurley in Twin Peaks in 2014 and in 2017), who also played Marcus Penn in UnderSiege 2: Dark Territory.

Reverend Lester Lowe is a werewolf that has been terrorizing the town of Tanker's Mill although it is unknown how he became a werewolf. However, Lester does not see his werewolf transformation as a curse but a bliss given to him by the almighty to punish people who are evil, immoral and corrupt. This is not to say he is above killing innocent people; he has killed innocents who were close to discovering his secret even though they committed no bad deeds.

After encountering Marty Coslaw, the book and film's protagonist, the boy shoots a fireworks object into the werewolf's left eye before escaping. Soon a hunt is on for a man with a missing eye which turns out to be Lowe who begins chasing Marty in an attempt to kill him but fails.

When a cop comes to his house to arrest him, Lowe changes into his werewolf form and kills him. Nights later after changing into his werewolf form, Lowe attacks the Coslaw house to kill Marty, his sister and uncle which leads to a showdown between the Coslaws and the werewolf. After obtaining a gun and silver bullet, Marty shoots the werewolf in his right eye, killing him. The Coslaws watch the dead werewolf change back to his human form which moves for one more scare before falling back to the corner dead.

In the original novella, Lowe was unaware that he was a werewolf and was killing people until Marty mailed him a letter, telling him that he knew what he was. Nevertheless, he was still not above killing Marty when he knew he had found out. He also changed once month during the full moon. The movie also omits the backstory of when Lowe became cursed-he had suspected it happened when some flowers he picked from the cemetery on Sunshine Hill turned black and died before he could put them in a vase. This occurred months prior to his first transformation. 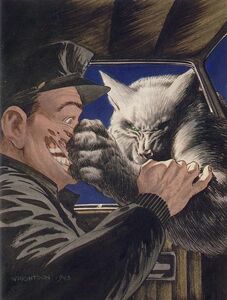 Lowe's death.
Add a photo to this gallery 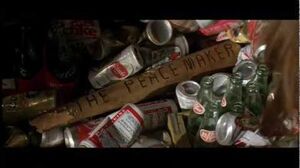 Silver Bullet (1985) Trailer
Add a photo to this gallery

Retrieved from "https://villains.fandom.com/wiki/Lester_Lowe?oldid=3480245"
Community content is available under CC-BY-SA unless otherwise noted.