Have success in his life.

Lester Nygaard is one of the main protagonists of the first season of crime comedy-drama TV series Fargo.

He was portrayed by Martin Freeman, who also played Oliver Chamberlin in The World's End.

Lester was originally shown as a put-upon and meek pushover. It is implied in the show that Lester was not very ambitious, as his wife, Pearl, stated that he had to try to work harder to get better things. This is supported by the fact that Chazz has a much better job than him. Until Who Shaved The Barber?, Lester also lacked confidence, as he was a victim of bullies (particularly Sam Hess). Despite this, if angered enough, Lester can have a rather violent temper, shown by his beating his wife to death after years of her verbal abuse. He is also not averse to crime to get vengeance on other people (he framed his brother for Pearl's murder).

Lester is also cunning and convincing, as he managed to persuade Bill Oswalt, the chief of police, that he didn't commit any crime (however, this is probably because Lester was Bill's friend while growing up, and Bill never believed that Lester could do anything malevolent). He also convinced his second wife, Linda, to go into his shop to get some money and passports, while in truth, he was afraid that Lorne Malvo was in there to kill him. Lester, however, isn't without his own faults. After he killed his first wife, he was immediately regretful, and blamed Lorne for inspiring him to kill her. However, as he became more of a lying criminal, he lost his remorse. Despite that, right before he died, he did have a worried but shameful expression, implying that he finally felt guilt for all of his actions again. Although he became confident and successful in the later episodes, he was still be afraid of a gun-toting killer like Malvo (although based on their interactions earlier, this is understandable).

Lester Nygaard was born in 1966. He also had a brother named Chaz, born in 1968. He went to high-school with Sam Hess, Bill Oswalt, Pearl Nygaard, and Linda Park. In school, during a mouse dissection, Lester fainted. He also fainted when a girl had her period in gym class. In one such instance, he was shoved into a barrel and rolled onto a highway. In his senior year, he attended the prom with Pearl, his future wife. The two married around 1988, when Lester was either 21 or 22.

However, by 2006, the marriage has mostly turned frigid. It has been implied by Lester's younger brother Chazz that Lester has fallen into a deep depression. However, one day, after being criticized by his wife, Lester ran into former school bully Sam Hess, now a trucker. Hess tricks Lester into breaking his own nose.

Lester broke his own nose to which Lorne Malvo, a contract killer, replied that he would kill a man over such treatment. Lester asked Lorne to kill Sam. Lester and Pearl visited Chaz to celebrate their nephew Gordo's birthday, where he accidentally broke a gun owned by Chazz. Lester tried to apologize, but was instead ridiculed for being a weak older brother. Lester hit Chaz and drove home with Pearl.  Lester confronted Lorne about the killing, but Lorne told him to start standing up for himself. Later that day, as Lester tried to fix his washing machine, Pearl taunted him after it broke. Fed up with her verbal abuse, he finally snapped and brutally murdered her with a hammer. Immensely regretful and emotionally distraught, he called Lorne and asked for help cleaning up the murder, but planned to frame/kill Lorne when he arrived, blaming him for his wife's death.

However, police chief Vern Thurman arrived at Lester's house to discuss Lorne, and if Lester had any involvement with Sam Hess's death. Before he could reply, Vern saw the blood on the stairwell. As he saw Pearl's lifeless body, he arrested Lester, until he was shot in the back by an arriving Lorne Malvo.

Lester followed Lorne into the basement after Deputy Molly Solverson arrived. Down there, Lester found Lorne is no longer there. As the police arrived (Vern called for backup), Lester thought quickly and ran his head into the wall to knock himself out and made it look like he and Pearl were victims of a home invasion. He woke up in the hospital the next morning and noticed he had a peculiar hand wound. (The Crocodile's Dilemma)

Lester is seen attending a service for Pearl. Chazz offers him a spare room to stay in for a few days, which he agrees to. He returns to his house and starts having flashbacks of the night Pearl and Vern died. He then gets a visit from Molly and Bill, who ask him a few questions about what happened. He gives them a very half-hearted story which Bill is satisfied with, and they leave. He packs a few days worth of things and moves into Gordo's bedroom, while Gordo sleeps on the couch in the living room. He finds a jar of urine in Gordo's closet. Later at dinner, Lester tells Chazz he plans to sell the house like he recommended, much to Chazz's surprise. He also decides to join him on the hunting trip this weekend.

Later that night, Lester goes to the pharmacy to pick up antibiotics to treat his hand wound. He is approached by Molly, who continues to question him as he tries to leave without picking up his medication. He is followed out to the parking lot, and Lester tells Molly to stop harassing him as he drives away.

Lester visited Sam Hess's widow Gina Hess to discuss the payout of life insurance. Gina flirted with Lester, but they stopped when her son Mickey accidentally shot his brother Moe with a crossbow.

Fargo hitmen Mr. Numbers and Mr. Wrench, who were watching Lester at the Hess residence, visited him at his work. They tried to intimidate him and get information, but left when Deputy Molly Solverson arrived. She pretended to be interested in an insurance plan, but in reality only came to subtly show Lester a picture of Lorne Malvo. She left after seeing his startled reaction.

Lester was later kidnapped by Numbers and Wrench and taken to a frozen lake to be killed. However, he was able to escape after attacking Numbers with a taser. He attacked police offer Knudsen in order to be taken away. Unfortunately for him, Numbers and Wrench were soon arrested as well and all three ended up in the same police cell.  Numbers and Wrench torture Lester and extract the name of Sam Hess's killer: Lorne Malvo. He planted evidence in Chazz's gun safe, such as the hammer used to kill Pearl, and also put a handgun in Gordo's schoolbag.

After Lester told the police that Chazz was the real killer of Pearl and Vern, Bill believes Lester didn't say this before because Chazz was his brother, and let Lester go. As Lester passed Chazz in his cell, Chazz screamed his name and Lester smiled to himself (implying that this was an act of retaliation on Chazz, most likely because he was a jerk to Lester and was more successful than him). Lester returned to the Hess residence where he had sex with Gina, promising to work hard to get the life insurance payout but knowing that it was actually canceled for nonpayment. Lester married his coworker Linda Park, and left Bo Munk Insurance to create his own business, Nygaard Insurance. Lester's agency was very successful, and Lester's life began to improve, with him buying a more expensive house with a new (and much more caring) wife.

Whilst attending an insurance awards ceremony, Lester spotted Lorne Malvo. He refused to walk away from Malvo, causing Malvo to kill his three companions. However Lester grew scared and assaulted Malvo before running to his hotel room. He and Linda hurriedly left and they flew home to Bemidji, with plans to escape immediately to Acapulco, Mexico. Molly Solverson visited Lester's house to ask him questions about the Las Vegas murders, but he did not give any information.

Lester and Linda quickly made arrangements for their trip to Acapulco, Mexico. They visited Lester's new shop to collect money and passport. Lester feared that Malvo could be inside, and so sent Linda in wearing his orange hooded coat. Lester was shocked when Malvo was inside and shot Linda in the head. Lester immediately went to Lou's Coffee Shop and ordered food and drink for two people, insisting Linda was picking up some items from his shop. He used a pay-phone and disguised his voice to report gunshots.

Lester was later questioned by police about the death. He was released, although was accompanied home by FBI agents Budge and Pepper. After Malvo killed Budge and Pepper, Lester and Malvo had a stand-off in the house, in which Malvo's leg got caught in a bear trap set by Lester, Lester tried to shoot Malvo but he threw his Salesman of the Year trophy at Lester, breaking his nose again, Malvo managed to escape to the forest, Lester went on the run. Two weeks later, he was in Glacier National Park, Montana. He was pursued by police on snowmobiles before he went out alone on a thin layer of ice on a frozen lake. He died after the ice cracked and he fell into the water. 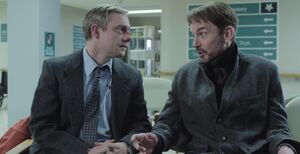 Lester before killing his wife, Pearl 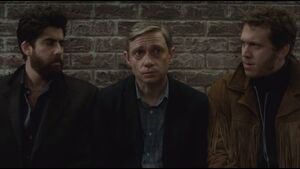 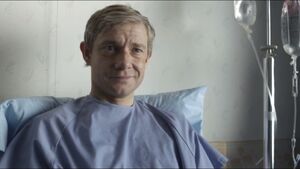 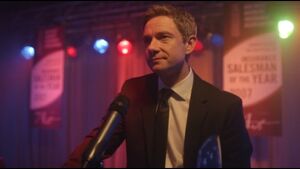 Lester after Malvo breaks his nose 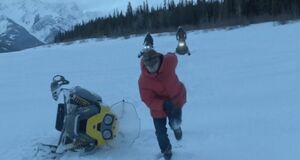 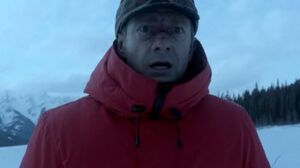 Lester moments before his death realizing he can't escape

Lester's hat after he falls through thin ice