To make a snow globe collection of shrunken landmarks.

Lester Van Luster is a one-time villain from the 2016 reboot of the Cartoon Network animated series The Powerpuff Girls, only appearing in the four-part extended episode "Small World".

In "Small World: Abra-Disaster", The Powerpuff Girls defeated Mojo Jojo in battle once again. Out of nowhere, Mojo Jojo was transported to an alternate dimension, where lived the grand, notorious, villainously acclaimed criminal, Lester Van Luster. Mojo Jojo was overjoyed to see Lester there and told him how big of a fan he was of his work. Lester thanked him and told him that he quite enjoyed his work in Townsville as well. Lester offered Mojo a deal, to team up with him as partners in crime, to take down The Powerpuff Girls. Of course, Mojo had to agree to this.

Lester gave himself one hell of an introduction, with lights and smoke and a live announcer. Lester told The Powerpuff Girls that he would be making Townsville disappear, and he used his magic to shrink The City of Townsville and everything in it down to size. The Powerpuff Girls went on a mission to collect all the heart stones, needed to make Townsville grow again.

In "Small World: Maze Daze", Lester Van Luster proved to be less of an ally to Mojo than he claimed to be at first, by behaving like more of a superior, than an equal. Lester bossed Mojo around and made him move his furniture.

In "Small World: Heart to Heartstone", The Powerpuff Girls and The Professor made it to Lester's lair, where they sneaked in, while he was sleeping and put the heartstones into his wand. At this point, Professor Utonium revealed that he was actually Lester in disguise and that putting heartstones into the wand was actually something that would give him more power. It was also revealed that the sleeping Lester was actually Mojo in disguise. Now that Lester got the wand, he had control and he turned The Powerpuff Girls into action figures.

Mojo Jojo was excited to be Lester's sidekick, but Lester grew annoyed of Mojo and knew now, that he no longer had to deal with him, so he betrayed Mojo and got rid of him. Mojo begged him for one last chance to prove he was a worthy assistant, and he used a magic trick, which ended up being a real trick, resulting in Lester getting punched in the face. This did not work, as Lester was quick to get back into battle and turn Mojo Jojo into a goose. Lester realized that if he did not destroy The Powerpuff Girls, they would just do the same thing to him.

Lester turned The Powerpuff Girls back into their normal selves and got ready to use his magic wand on them. Blossom begged him to stop and the magical power coming from the wand stopped. Lester was confused as he did not do this. The girls quickly found out that because it was them, who collected the heartstones, they had power over them, not Lester. They took the heartstones and used them against Lester. They eventually shrunk Lester down to size and trapped him in a snow globe once again, saving the day.

The last few seconds of the episode, revealed that Mojo Jojo was still trapped in the body of a goose, and that nobody had yet, reversed the curse of Lester's spell on him. 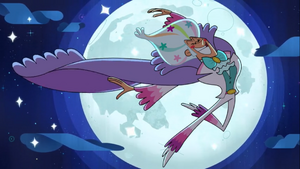 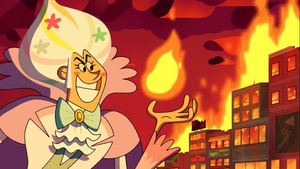 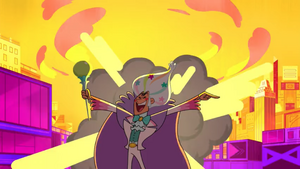 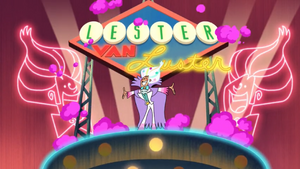 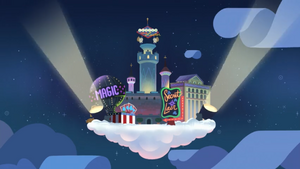 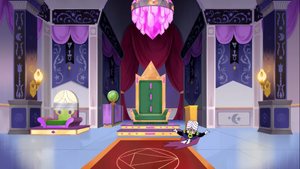