Kill Agent Malcolm Turner and to escape from the FBI.

Locate Sherry Pierce and her son Trent and to reclaim the stolen bank money (both failed).

Lester Vesco is the main antagonist of the 2000 crime comedy film Big Momma's House. He is the dangerous, psychopathic ex-boyfriend of Sherry Pierce. After escaping execution in prison, he begins his search for her and her son, Trent.

He was portrayed by Terrence Howard, who would later go on to portray Lucious Lyon in Empire.

Lester Vesco, who was originally serving a life sentence in prison for murder and armed robbery, escapes from his cell by killing the doctor and stealing his car. The FBI assigns Malcolm and John to capture Lester, and sends them to a small-town Cartersville, Georgia to stake out the house of a large, elderly African American woman named Hattie Mae Pierce (whom her friends call her "Big Momma"), the estranged Southern grandmother of Lester's ex-girlfriend, Sherry Pierce, who supposedly aided Lester in his original bank robbery by giving him the key to the vault. After Big Momma unexpectedly leaves town to help her ill friend within a couple of weeks, Malcolm and John sneak into her house to plant security cameras and tap the phones. Sherry calls Big Momma's house, and Malcolm disguises his voice as Big Momma in order to lure Sherry and possibly obtain a confession. The plan works, and Malcolm and John work together on a Big Momma disguise costume before Sherry's arrival the next day.

Lester buys a gun that night on his way to Georgia from an arms salesman whose wife said the gun is for $100 but he said it's $200. Lester doesn't care as he walks. The man holds Lester at a gunpoint. But Lester dares the coward to shoot as he looks at him with his merciless eyes before the salesman let him go.

Meanwhile Malcolm, Sherry, and Trent return to Big Momma's house after mass, Malcolm pulls a gun on Big Momma's surprise birthday party. During the party that evening, the real Big Momma returns early, and John attempts to stall her. Meanwhile, Malcolm accidentally stumbles across the stolen money hidden in Trent's footlocker. Sherry sees this, and tells Malcolm the real story: Lester had merely been playing her for a fool the whole time. Lester wooed Sherry, stole her keys, and got into the vault during the robbery, and Sherry did not tell anyone about her stolen keys out of fear of getting fired. Malcolm goes off to call for his real name to come help them out. Meanwhile, John quietly tells Nolan in the bathroom that the real Big Momma is back, and Nolan accidentally locks Malcolm out of the house to think that he is the real Big Momma.

Meanwhile, Lester arrives into Big Momma's house through the window, having successfully tracked Sherry, Trent, and the money, and attempt to take Sherry and Trent out of the house with him, but after Sherry pleads to Lester to say goodbye to the real Big Momma, Nolan spots Lester's gun and intends to arrest him, but accidentally unloads his own gun. Before Lester can kill Nolan, Malcolm breaks through the window to fight Lester, causing confusion among the partygoers as they all see two Big Mommas. In the ensuing struggle, Lester shot John in his right shoulder and ends up ripping Malcolm's mask during a fistfight, revealing Malcolm's real identity. Nonetheless, Malcolm eventually subdues Lester and knocks him out of the window.

Sherry and Trent are heartbroken to realize that Malcolm was just an FBI agent the whole time, and they refuse to speak to him, even when the police arrest Lester and paramedics take John to the hospital for a gunshot wound in his right arm. 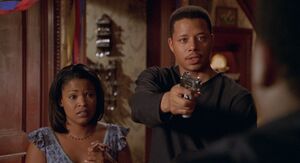 Lester while holding Sherry and her son Trent hostage, aims at Nolan.