Shipmaster of the Enduring Conviction

Mercenary
Let 'Volir is a former Covenant Shipmaster and the leader of a crew of Sangheili mercenaries aboard the ship Enduring Conviction. Let and his crew were eventually recruited by Atriox into The Banished, with Let becoming one of Atriox's top officers. Atriox notes Let as being a powerful warrior given the large number of veteran Sangheili under his command.

Let 'Volir is a major antagonist in Halo Wars 2.

Prior to the Great Schism, Let 'Volir served as a Shipmaster within the Covenant military. However, after the Covenant Civil War, 'Volir was a Covenant Separatist left without a clear path after being excommunicated from his religion.

However, 'Volir was approached by Atriox, who offered fuel and supplies for his carrier and crew in exchange for his loyalty. Despite being accustomed to commanding Jiralhanae, 'Volir accepted Atriox's offer, seeing no other viable path forward.

Despite his name being tarnished in Sangheili society for siding with a Brute, Let continued to remain loyal to Atriox in order to ensure the safety of his crew. 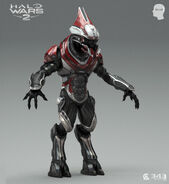