The Witcher 2: Assassins of Kings

Witcher of the School of the Viper

Complete his mission for Nilfgaard.

Letho of Gulet, also known as the Kingslayer, is the central antagonist of the video game The Witcher 2: Assassins of Kings. He is a Witcher from the School of the Viper. His closest associates are Auckes and Serrit, also Kingslayers and Witchers from the School of the Viper. For reasons which were initially unknown, he enlisted the help of Iorveth and the Scoia'tael to aid him in his plan to kill the kings of the Northern Kingdoms. To back his claim, this man showed Iorveth a head he claims belonged to Demavend, King of Aedirn and Sovereign of the Pontar valley.

He was voiced by Mark Lewis Jones.

Letho is first seen in the Prologue, where he is revealed to be King Foltest's killer. In a later cutscene, he appears to have just killed King Demavend of Aedirn and comes to Iorveth's hideout seeking Scoia'tael assistance in killing Foltest.

In Chapter I, Letho attempts to betray Iorveth by trying to turn one of his lieutenants against him. However, the elf refuses and Letho kills his entire group, leaving the elf to be captured by Flotsam's guards. Geralt later brings Iorveth to Letho as a ruse to expose the latter's treachery. However, Iorveth and his Scoia'tael are attacked by the Blue Stripes, leaving Geralt and Letho to battle each other. Letho prevails in the battle with Geralt but once the witcher is down, he does not kill him. Letho explains that Geralt once saved his life, so with this small mercy they are now 'even' and leaves to kidnap Triss and force her to teleport them to Aedirn.

Geralt later learns that Letho is a Witcher of the Viper School. Geralt had first encountered him in the forests of Angren on July 25, 1270, while chasing the Wild Hunt in search of Yennefer. He had rescued Letho from death after the latter had been struck by a slyzard's tail. Letho works with two other witchers of the Viper School, Serrit and Egan, who are the ones who attempt to assassinate King Henselt in Chapter II.

Geralt meets Letho for the final time in the Epilogue, right after the fight with Saesenthessis. The kingslayer waits for Geralt in the centre of the ruins by the Temerian Quarter. Geralt may ask about his intentions, the Wild Hunt, Yennefer and/or other major events. Geralt must then choose to either let Letho go or fight him to the death. Depending on the outcome of that choice, Letho will ultimately either leave or be killed by Geralt in their duel.

Letho and his companions were captured by agents of Nilfgaardian Empire, who later itteregotiated them. Later the emperor himself gave them an offer of rebuilding their Viper School for killing as many rulers of Northern Kingdoms as possible, so Nilfgaard could easily conquer weakened lands.

Letho's first target was Esterad Tyssen, king of Kovir, however there he met Sheala de Tancarville, a member of League of the Sorceresses. He tried to frame her into murder of his target, so he ensured believable witnesses. She hired him to assassinate Demavend, King of Aedirn and Sovereign of the Pontar valley. This caused he changed target and he didn't even had to frame her. He observed the king before striking him down. It took a lot of trouble to escape from Aedirn. Thanks to his client he found Iorveth, who could hide him until there case of the regicide is silent.

However, Letho manipulated Iorveth to help him assassinate Foltest and his warriors to help Serrit and Egan in assassinating Henselt. It was no secret that the Temerian king planned to conquer castle of La Valette, so Letho made a plan. People go to cloisters, when their cities are seiged, so he pretended a monk to get into cloister in the castle. There he killed Foltest what caused chaos in his kingdom, baron Ravanen Kimbolt and count Lucius Maravel competed to succeeded him.

Letho returned to Iorveth's hideout after successful murder of Foltest. He decided to backstab Iorveth as he realised he's too smart to manipulate him any longer. Geralt convinced Iorveth about Letho's disloyalty and made the kingslayer escape. He wanted to rejoin Serrit & Egan in Aedirn so he captured Triss and forced her to teleport both of them there. After successful teleportation he abandoned wounded Triss to mercy of trolls and rejoined his fellow kingslayers. He informed them that he's no longer in league with Iorveth and Geralt seeks them to stop them. He left them to assassinate Henselt and travelled to Loc Muine to ultimatelly frame the Logde of the sorceresses in his regicides. Later he waits for Geralt to tell him what he knows about the Wild Hunt and Yennefer and deal with him. Geralt can decide if he kills Letho or let him leave.

Letho returns in Witcher 3: Wild Hunt, as a supporting character this time if he was spared in Assassins of Kings. He will be at the Reardon Manor in Velen and have a related quest Geralt can do to enlist him to fight the Wild Hunt in Kaer Morhen. Geralt has to interfere with his "death" and then later choose to let him go to Kaer Morhen. If Letho is sent Kaer Morhen, he aids in the battle against the Wild Hunt. If Vernon Roche and Ves are recruited, they will be less than happy with Geralt's decision regarding having Letho around and question him about it.

Letho joins Geralt and Lambert's hunting party against the Hunt's advanced scouting parties. When the trio are surrounded by the Hunt and Triss launched a fireball to save them, while Geralt and Lambert take cover with Quen, Letho picked himself up from underneath a dead Hunt warrior. Upon spotting Hunt general, Imlerith, Geralt advised against confronting him, prompting Letho to call him a "pansy".

After Vesemir's funeral, unless Geralt asks Letho to remain at Kaer Morhen, he resolves to travel east over the mountains. 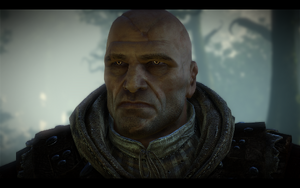 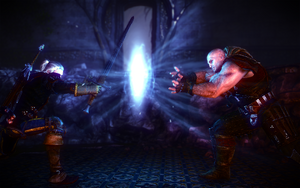 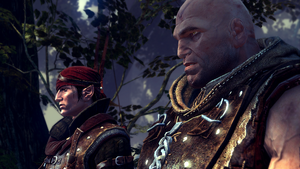 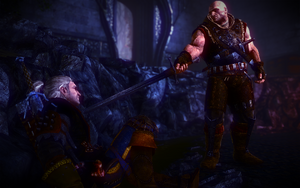 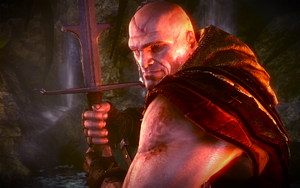 Letho ready to fight
Add a photo to this gallery

Retrieved from "https://villains.fandom.com/wiki/Letho?oldid=4310193"
Community content is available under CC-BY-SA unless otherwise noted.