Plunge the world into war of an unprecedented proportion and make an everlasting impact on the world.

Bio-Engineered Vampires
The Letzte Batallion, translated in English as the "Last Battalion", is a Millennium special forces unit that seems to be made up entirely of Waffen SS volunteers transformed into vampires.

After the events of Hellsing: The Dawn, most of the remaining Nazi officials escaped to South America some time after the end of the war in Europe, taking with them a battalion of 1,000 Waffen-SS volunteers. They eventually formed the "Letzte Bataillon" a secret unit for the eventual execution of Hitler's Special Order #666.

During the events of Hellsing's main storyline, as the Major returns to Millennium's secret base in Jaburo, a Nazi Colonel as well as the other Nazi officials became furious with the Major, frantically asking why the top echelons had never been converted into vampires, and tried to beat him into submission. To this, the Major reveals two things: every single other member had already been converted, and the old generals themselves were the leaders only nominally. He then proceeded to assert his authority by ordering the soldiers to turn against their own superiors. Not long after, the Major had them executed on a live broadcast to the London summit between Iscariot and the Table, formally declaring war upon England.

Within three armored zeppelins, a thousand loyal soldiers armed with huge amounts of weaponry, marched on London. Once they arrived in the skies of London, they launched waves of V-1 flying bombs, devastating the city in mere moments and carving a massive, burning swastika created by the flaming destruction to mark the tremendous massacre. For the assault's second phase, Millennium soldiers descended from the zeppelins, being launched from catapult-like devices. After massacring everyone in sight, the British police and scattered military units fortified positions and hunkered down behind barricades, but were no match against the SS Vampires, having no specialized anti-vampire munitions. However, their forces were quickly depleted by both the frustrated Hellsing HQ assault attempt and the intervention of Iscariot forces in a fierce clash. By the time of Alucard's return, only 572 troops remained. Most of them were wiped out by Alucard and his undead army, along with the Grand Army of the Reconquista, and the remains were presumably wiped out in the sanitation of the city. 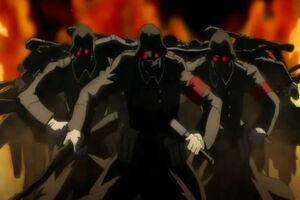 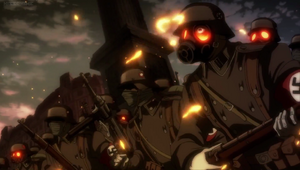 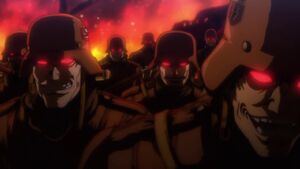