Harvesting the human race as their primary food.

Conquer the North America and place themselves as the new dominant species on the planet.

Eliminating all other competitors who could become threats to their food sources (namely humans).

The Leviathan (also referred to as "Leviathans," "Levis," or "chompers") are the main antagonistic species of Season 7 of the television series Supernatural.

They are based on the sea monster from Jewish belief, with some resemblance to the Great Old Ones as well.

They were created by God long before He created angels and humans. However, God became concerned that the Leviathans would "chomp the entire petri dish" (as Death put it while revealing their existence to the Winchesters and Bobby Singer), so He locked them away in Purgatory, which He created for the express purpose of imprisoning the Leviathans.

In the 20th Century American author H.P. Lovecraft managed to be first human to open the door to Purgatory, and saw the Leviathan and souls of monsters.

In 2011 the angel Castiel opened Purgatory and absorbed all the souls that resided in that realm to increase his power and become the new God; by doing this, he also absorbed the Leviathans, who began taking control of his body. With the help of the Winchesters and Bobby, Castiel returned all the souls he absorbed back to Purgatory; unfortunately, some of the Leviathans managed to remain inside him and quickly seized control of his vessel.

When Castiel's body was unable to contain them, the Leviathans made their way to a nearby reservoir, where they left Castiel's body and proceeded to spread throughout North America.

The Leviathan's started to possess different human's, and though they were in the beginning unorganised, their leader soon took over the human form of Dick Roman, a powerful and wealthy American billionaire.

Seeing the United States' population as a great source of food, the Leviathans started to infiltrate major political, economical and scientific institutes, with the goal of turning the entire nation a cattle farm for the beasts.

Dr. Gaines started to develop additional food supplements that would to make humans more compliant and passive, but a small precent of human's turned into savage cannibals. Due to this failure Dr. Gaines was forced to "bibs" (self-devoure) himself.

Dick Roman also killed Bobby Singer, while the hunter's were investigating a facility owned by the Winchesters.

Other Leviathan-scientists started to develop cure for diseases such as cancer, in order to make the future human-cattle more healthy and better-tasting. Through SucroCrop they also managed to perfect the Dr. Gaines original plan to make the humans more mindless and fat.

Dick Roman also spend massive amounts of resources to acquire the Word of God about the Leviathan, alongside the current Prophet of the Lord, Kevin Tran, in order to keep the weaknesses of Leviathan secret. Still, Dean and Sam found out how to kill them: the Bone of Righteous Mortal Washed in the Three Bloods of Fallen.

Roman also tried to make allies with the Alpha Vampire and the demon Crowley, from which both failed, and both entities helped the Winchester's in taking out the Leviathan's.

In the end Dick was killed by Dean Winchester and Castiel, but he managed to transport the hunter and the angel with him back to Purgatory. Crowley claimed that the other Leviathan, without Dick, would just be other monsters, just harder to kill.

A Year in Purgatory

During Dean's year in Purgatory, he thought countless Leviathan, though it is unknown whether Dick Roman was still in charge of them or not.

Based on remarks made by both Edgar and the Alpha Vampire in "There Will Be Blood", Leviathans are just as old as Eve and are related to her in some way. This is supported by the Alpha's claims that the Vampires, who are Eve's children, originate from Leviathans - to which Edgar responds, "barely". Furthermore, when the Alpha points out that he is a son of Eve, Edgar replies that he knew Eve and that she was a "mutt", implying that Eve may be a Leviathan hybrid or mutation. Edgar, however, expressed scorn to both Eve, whom he claimed to know and described as a whore, and her monster creations. Leviathans despise all other species and enjoy flaunting their superiority over their enemies.  In general, Leviathans regard humans as little more than cattle and food. They also consider seven billion to be a limited resource demonstrating the masses they intend to consume. They do, however, have some respect for certain individuals, such as Charlie Bradbury and Kevin, who possess a certain "spark" that the Leviathans are unable to copy. Their leader seems to admire these individuals for their ingenuity and progress, as well as their history of warfare and violence. Despite this, even Dick views this as "cute" and considers them all as food. Leviathans also consider Demons to be lower than humans and garbage and would kill them all simply on principle if they weren't preoccupied with other things to do. They also despise the monster races sired by Eve, viewing them as mutts who are using up their food supply, to the extent where they genetically engineer their human complacency drug so that it poisons every monster, as a side effect. Leviathans are also cannibalistic, eating other Leviathans for their failures (or just being annoyances). Their leader is known for his cruel punishment, known as "bibbing," in which he forces a Leviathan that failed him to eat itself. In general, Leviathans believe every other species to be inferior to them and consider themselves invincible, believing it impossible for humans, demons or angels to kill them. Because they are able to kill practically all other species, they consider themselves the top of the food chain and fear nothing but their Leviathan superiors.

Though chaotic, it is established that Leviathans have some sort of hierarchy, with several of them taking orders from their leader, Dick Roman. Under Roman's command, there are head Leviathans, like Edgar and Joyce, who in turn have authority over other Leviathans. Dick Roman orders several Leviathans to hunt down those in their group who have been feeding indiscriminately and to deal with the Winchesters and their allies. Their hierarchy seems to operate entirely through strength and fear, as Dick talks about clawing his way to the top, and George doesn't even attempt to challenge his superior on his own and fears her greatly. In general, the Leviathans in authority have an easy time keeping the rest of them under control. They show no real loyalty for each other and will betray their superiors if it is in their best interests and obey their superiors out of fear rather than loyalty. George disobeyed and even turned against his superior, Joyce, in Out With The Old. Only Dick Roman himself seems to command absolute respect and loyalty from the Leviathan species as a whole and is feared by all of his subordinates (as he bibs or eats any who disobey or fail him). However, with Dick dead, the Leviathan hierarchy is destroyed as they have no-one to turn to as Crowley points out they have only ever had one leader. Without Dick, the Leviathans resort to acting like regular monsters, although Crowley warns Sam that the remaining Leviathans may try to regroup unless Sam and other hunters prevent them from doing so.

On Earth, they take serpent-like shape underwater. Once within a vessel, Leviathans are able to shapeshift without taking a new one (provided they can acquire DNA). They seem to change their hosts biological structure, as they replace the vessels blood with their black goo. While in a host, they can dislocate the jaw and reveal a mouth full of large teeth and a forked tongue. While they can devour almost anything, they seem to prefer humans to all others. They can also have particular tastes. For example, Chet liked to eat his victims with melted cheese sauce as "everything tastes better with cheese." Dick Roman sometimes had his meals barbequed. Leviathans are also capable of eating human food, such as hamburgers and salads, but they find it disgusting. At least some of them enjoy the taste of other Leviathans, as before consuming his subordinate Dick questioned "Why would I waste a perfectly good meal?"

As seen on the episode Blood Brother, their true form in Purgatory, as perceived by humans, looks like a ball of black goo, much like the substance of their injured vessels on Earth. In this form, they have incredible mobility, as they have shown the capability to fly and land anywhere with a noticeable force, before taking humanoid form. Although this form still possesses the powerful jaws, the Leviathans may choose when to reveal them. It should be noted that this may only be how they can manifest in front of human like entities, like angels manifesting in vessels in front of humans, as they were originally created long before humans. Their original form has never been described before they were locked in Purgatory. 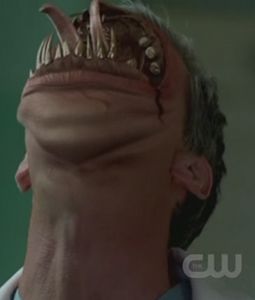 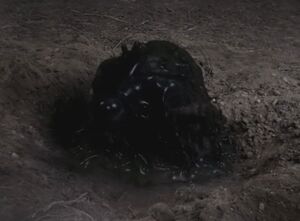 Retrieved from "https://villains.fandom.com/wiki/Leviathan_(Supernatural)?oldid=3636375"
Community content is available under CC-BY-SA unless otherwise noted.