The Leviathan appears as an antagonist in DC's Legends of Tomorrow.

The Leviathan is the final weapon of Vandal Savage during his conquest of London. After his daughter Cassandra has been captured by Rip Hunter and his team, he orders his commandant to send out the Leviathan to retreive Cassandra as wells as burning down the refugee camp. The Leviathan attacks the Waverider, grabbing it and lunging it far away. The Waverider crashes into the ground far away from the battlefield. After making sure that everyone is alive, Rip and his team are told by Gideon that the Leviathan is advancing and will arrive at their location in one hour. To be able to defeat the Leviathan, Jax modifies Ray Palmer's A.T.O.M. suit to not shrink him but make him much larger to ensure that he has a chance against the giant robot.

Once the Leviathan reaches the wreckage, Ray engages it in a fistfight. Although he at first throws down the Leviathan, the robot gets back up and copies Ray's combat moves, striking him down with a laser beam. However, after an encouraging speech from Jax, Ray gets back on his feet and hits the Leviathan in the face, ripping off the entire head and defeating the Leviathan. 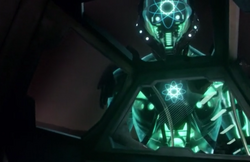 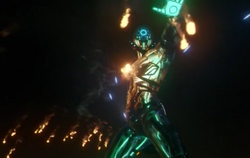 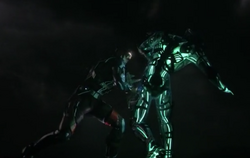 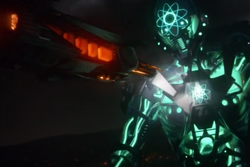 Retrieved from "https://villains.fandom.com/wiki/Leviathan_(Arrowverse)?oldid=3539860"
Community content is available under CC-BY-SA unless otherwise noted.