Spread Phazon throughout the Universe (succeeded).

The Leviathans are the main antagonistic force in Metroid Prime 3: Corruption, and in the backstory, are the main antagonistic force in the entire Metroid Prime trilogy. The Leviathans come from planet Phaaze, which is itself a sentient being, in the form of a gigantic planet. Leviathans are semi-sentient meteoroids that travel through space and corrupt planets by impacting them and spreading Phazon. They are born in a womb in the Genesis Chamber on the planet Phaaze. There have been five known cases of Leviathan impact, one captured by the Galactic Federation, and one infant in the Genesis Chamber.

The five known cases of Leviathan impact are listed below. The Pirate Homeworld is the closest a Leviathan came to achieving success, because the Pirates wanted Phazon on their homeworld - although some Pirates put up a feeble fight at blowing up the Leviathan as it neared their world. The only Leviathan destroyed prior to impact was on planet Norion, a Galactic Federation stronghold, where Samus successfully destroyed the Leviathan before it could even hit.

On the planet Tallon IV, the Chozo predicted the impact of a stellar object that would bring a "Great Poison". They also foretold that a "Worm" would infest the planet and devour it from within. This prophecy eventually came to pass; a Leviathan eventually smashed into the planet, causing the spread of Phazon, either killing or corrupting all the Phazon came in contact with. The remaining Chozo eventually built a temple, called the "Cradle", to contain the Leviathan and the Phazon. Although the Chozo lived on as Ghosts, the Phazon still affected them, turning them into vicious, irrational creatures that would attack anything on sight.

The Chozo held a prophecy, however, that a savior would come to their planet, a savior in the figure of a woman, who would destroy the "worm" and stop the "great poison".

When Samus Aran arrives on Tallon IV in the events of Metroid Prime, she manages to collect the twelve Chozo Artifacts, which were the keys to the Cradle. After discovering the "Worm", known as the Metroid Prime, she defeats it, and destroys Tallon IV's Leviathan.

On Aether, a stellar object, revealed to be a Leviathan, struck the planet, tearing open the fabric of space, and splitting Aether into two dimensions; Aether and Dark Aether. The Ing, the species of Dark Aether, invaded Aether, where the Luminoth resided. Although the Ing were nearly capable of exterminating the Luminoth, Samus arrives and manages to restore the power to Aether and defeat the Ing Emperor. As soon as the Ing Emperor is defeated, and the last of Dark Aether's energy drained, Dark Aether undergoes a cataclysmic destruction, implying that it's Leviathan was destroyed.

The Bryyo Leviathan was placed with a lot of violence. The inhabitants of Bryyo are beasts that act on instinct, and they didn't stand a chance against the Space Pirates who wanted the Leviathan on Bryyo. To disable the shield around the Leviathan, two power generators need to be destroyed, and one of the generators is guarded by two anti-aircraft turrets. The guardian of the Leviathan's core is Mogenar, an ancient war statue that was brought back to life through Phazon corruption.

Unlike the other cases of Leviathan impact, the Space Pirates wanted a Leviathan on their planet, knowing the military benefits and power of Phazon. As most were already brainwashed by Dark Samus and her followers, the pirates rejoiced that the "Dark Hunter" would bring a Leviathan to their world. The guardian of the Leviathan's Core is Omega Ridley.

Leviathans vaguely represent the actual Leviathans of mythology, where they are shaped like squids. They have tentacles that propel them through space after being released from Phaaze. Each Leviathan has a core that relies on a Phazon-corrupted creature for protection, which is usually a local bioform. Dark Samus herself, aka Metroid Prime, was the local organism the Leviathan corrupted on Tallon IV. In Dark Samus' Leviathan, a control center is implanted within it's skull. Leviathans are also known for their ability to open wormholes, which allows them to travel great distances in short amounts of time. 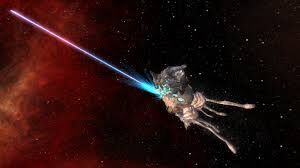 A Leviathan uses its laser to open an interdimensional portal. 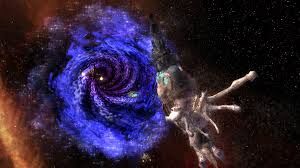 A Leviathan, now given purpose, flies towards the portal to infect a planet. 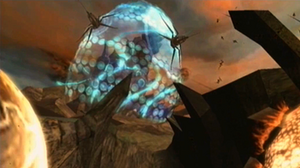 Bryyo's Leviathan in its' shield. 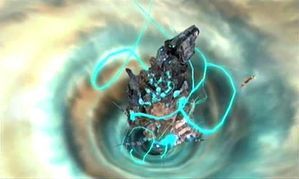 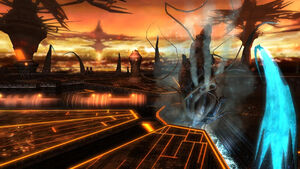