Monster
The Leviathan is a massive, aquatic Creature of Grimm from the American web cartoon series RWBY and the final antagonist of the 6th Volume.

The Leviathan has a large, bipedal, almost reptilian main body with white plating and spikes running along the front of its body, with a large, sail-like set of webbed spikes running along its spine. It has two long arms ending in webbed fingers with claws. Its head resembles that of a dolphin or porpoise, with hundreds of small sharp teeth. It has gills running along either side of its neck and a long tail ending in a red Caudal fin.

The Leviathan, along with the rest of the Creatures of Grimm, were created by the God of Darkness to offset the God of Light's creations of life.

In "Seeing Red", after Caroline Cordovin's robot mech is incapacitated by Ruby, she receives an alert from the Atlas Military's Argus base. Though she wants them to send all of their units to aid her in defeating the Beacon students, they tell her that a Leviathan was awakened during her battle and is headed for Argus, along with a swarm of Sphinxes and Manticores.

In "Our Way", the Beacon students fly over to help aid in taking down the Leviathan, with Ren and Jaune hiding their ship from the Sphinxes and Manicores. Once they get close enough, Ruby decides to use her Silver-Eye power. The military puts up hard-light shields, but the Leviathan uses fire breath to destroy them easily and fend off the Beacon students' airship. Ruby has Weiss summon the avatar of a Lancer to carry her in front of the Grimm, where she attempts to use her Silver-Eyed power to freeze it into stone. However, she cannot seem to get it to work, though she envisions traumatic memories like she did before. The Leviathan is drawn to the Relic of Knowledge on Ruby's belt and attempts to devour her, forcing Ruby to call for Jinn to stop time and buy her more time. Jinn, while not happy about being summoned without a question, admits Ruby was clever in using that to buy time and allows her to envision happy memories of friends and family, activating her power and freezing the Leviathan in stone. However, it does not hold and the Leviathan begins to break free. Before the leviathan can fully escape, Cordovin manages to re-enter the fray in her mech and use a giant drill to finally kill the Grimm. She then lets Ruby and the others go as the Atlas military fights off the rest of the Grimm. 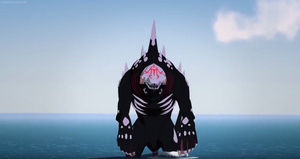 The Leviathan rising up. 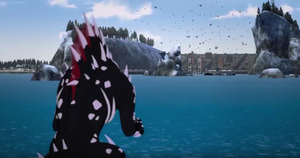 The Leviathan making its way to Argus. 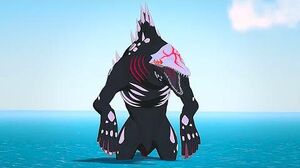 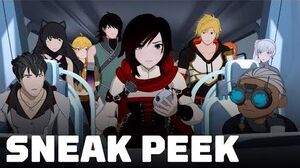