The Gliding Serpent
The Monster of the Sea

Varies between cultures, but generally, it is to defeat God.

The Leviathan has become associated with many large and frightening sea creatures in legend, such as the sea serpent or fictional whales (as mentioned in Moby Dick).

Through various interpretations, the Leviathan is shown to be an incredibly violent creature that cannot be tamed nor reasoned with. It looks down upon all that is weaker than it, and the mere thought of those who try to challenge it just makes it laugh.

Its portrayal also varies from culture to culture, but it is often portrayed as either a serpentine dragon-like monstrosity or a giant fish/whale. It is said to have a hide of impenetrable armor, along with graceful limbs, blade-like teeth, glowing white eyes, and even multiple heads (despite being portrayed with only one head).

The Leviathan is said to possess a variety of different abilities that make it impossible for humans to defeat it. Not only does it have sharp teeth and tough scales, but it is also said to possess the ability to shoot fire from its mouth that is capable of boiling the entire ocean.

It is also said to have control over the earth's oceans; mere thrashing from it is enough to form entire tsunamis.

The Leviathan symbolizes the wild and unpredictable side of the world's oceans, which were revered and feared in equal parts by the ancient world. In many religions and folklore, the ocean was also the traditional prison for evil spirits, primordial gods, and Lovecraftian horrors. The Leviathan can be seen as a merging of these primal fears and wonder.

Its draconic appearance and fierce nature are likely a symbolism for Satan himself, and its continual struggle against God is seen as the primordial chaos of the past (the darkness prior to the light) fighting with the inevitable order of the future (the "World to Come").

In demonology, Leviathan is one of the seven princes of Hell as well as the realm's gatekeeper, taking the form of the "Hellmouth." 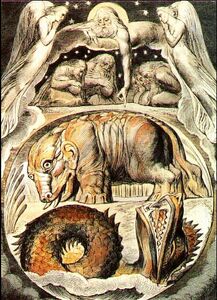 The Behemoth and the Leviathan, watercolour by William Blake from his Illustrations of the Book of Job.