Creating dinosaurs for his own business company Biosyn.

Collect dinosaur embryos/eggs and use them to create a dinosaur-hunting preserve (failed).

Lewis Dodgson is the overarching antagonist of the Jurassic Park franchise.

He was the Head of Research at Biosyn who was known for his law-breaking studies, including a rabies vaccine test conducted on farmers in Chile without their knowledge of consent, which led to at least ten casualties. However, Dodgson was able to escape prosecution.

Originally, he had hired Dennis Nedry to steal embryos from Jurassic Park while on Isla Nublar, so that Biosyn could clone its own dinosaurs. He met with Nedry in Costa Rica to discuss the arrangement and give him equipment to complete his task: a can of shaving cream with a secret compartment to hold fifteen species of dinosaur. However, Nedry was killed by a Dilophosaurus and dropped the embryos while attempting to leave the park.

Lewis Dodgson began his controversial career as a graduate student at Hopkins. He had been dismissed for planning human gene therapy without FDA permission. Later, Dodgson secretly went from one criminal activity to another, and kept on doing experiments on genes and animals, until joining Biosyn. His thorough sense of discretion eventually helped worked his way up, covertly manipulating many scientists from other companies and established a network of people who work for him, until eventually becoming the head of research. Arguably his most notable crime was a rabies vaccine test conducted on farmers in Chile without their knowledge of consent, which led to at least ten casualties.

In the novel, Dodgson met with Biosyn's board of directors to discuss the opportunity of stealing InGen's dinosaur embryos and bring them back to Biosyn, so they can create dinosaurs just like InGen did. Dodgson meets Dennis Nedry in a San Francisco airport coffee shop and reveals a briefcase of $750,000 and Dodgson tells Nedry that that's only half of the money Nedry will get for stealing the embryos. Nedry says he wants all the money on Sunday and tells Dodgson to have a boat by the east dock. Dodgson says he will and gives Nedry a shaving cream can, revealing a secret compartment to collect all the embryos and get past security.

When Nedry failed, Dodgson prepared to locate InGen’s Site B to collect the dinosaur eggs. He commissioned a team that included Howard King and George Baselton. When Sarah Harding was trying to get to Isla Sorna, Dodgson gave her a ride on the fishing boat with him and his gang, but he was really plotting to throw her overboard and drown her.

Upon arriving on Isla Sorna, Dodgson and his team started collecting dinosaur eggs using a sonic device Dodgson used to deter the dinosaurs. However, during the attempt to steal Tyrannosaurus eggs, Dodgson's machine shut down. With no protection, Baselton was eaten by the dinosaurs, and Dodgson fell off a small cliff, knocking himself out in the attempt to escape being devoured.

His vile plot and evil scheme was practically undone by the angry T. rex parents. It was believed that Dodgson had died when he fell off the cliff, but he awoke later to find a Compsognathus dinosaur attacking him, and was able to seek refuge from them in a shed. Upon waking later, he discovered the electric car that Sarah Harding was hiding under. When he tried to steal it and escape the island, Dodgson was attacked by Harding and then captured by the T. rex father, and carried to the nest where the T. rex mother and her babies were. There, Dodgson was presented to the T. rex babies as their first hunted meal.

In the films, however, Dodgson has a significantly smaller role. He meets Dennis Nedry at a Costa Rican restaurant, and they make a conspiracy to steal dinosaur embryos so he can give Dennis seven-hundred and five-thousand dollars for it, giving Nedry an item (disguised as a Barbasol shaving cream can) for help for him to steal the dinosaur embryos.

Dodgson is mentioned several times in the game by his associate at the docks, Miles Chadwick. Chadwick calls Dodgson about Dennis Nedry's absence from the docks and that he's stuck somewhere in a doorway, but when Dodgson asks him for a Plan B, Chadwick tells him that he already has a Plan B, and claims that Nedry won't betray them due to how much money he'll get and that it doesn't matter if Nima Cruz knows who he is. He proves his point by trying to hand the phone to Cruz and says that Dodgson is calling, but she just shrugs him off, so Chadwick tells him that she doesn't care and hangs up the phone.

Eventually, time passes and Chadwick calls Dodgson again. Upon finding out that the Barbasol can is missing from Nedry's truck, and from his experience with Dodgson, he becomes very worried that Dodgson might kill him for his failure.

Dodgson is set to return in Jurassic World: Dominion as the CEO of Biosyn.

His novel version gets much more characterization than his film version. At first glance, Dodgson appeared to be a charismatic, sophisticated, polite and attentive, yet humorless and often serious man, but in reality, he was a cold-blooded, shady, manipulative and ruthless man. Unlike other scientists, who use their creativeness to invent new things, Dodgson's creativity was used almost exclusively on espionage and ruthless planning by stealing other people's ideas. He was willing to pay any price, whether in money or human lives, for achieving his goals. Despite this, Dodgson is extremely loyal to his company as well as a quiet and subtle master pragmatist who usually prefers to thoroughly operate in the shadows, knowing that any evidence of Biosyn's involvement could potentially destroy the company. One of those examples, include hiding his real name in public to avoid drawing attention.

While some of the Jurassic Park villains had some caring toward family members, Dodgson didn't even care about his own parents. He even compared shooting his own parents to shooting a tiger, which indicates he saw them as no better than the animals whom he cruelly experimented on. The novel heavily implies that Dodgson has a history of abusing children, starting from sending at least one child to the hospital due to experimental marketing of genetically engineered food products, to killing at least one child in the rabies vaccine's experiment and finally trying to abduct a baby T. rex.

While not much about Dodgson's personality is shown in the movie, there are subtle hints of it. He is depicted as a very secretive and humorless man, as shown by the fact that he wears a hat and sunglasses to make himself look inconspicuous, and telling Nedry not to use his name, only for Nedry to announce him at the outdoor restaurant because no one cares about who he is.

He is also very shady, as he coldly leaves the car door open when he walks out which prompts another person in the car to shut the door for him, and also chuckling at the thought of Nedry getting past the InGen security to steal all of the fifteen dinosaur embryos from Isla Nublar. It is implied that Dodgson is an untrustworthy man as well, as Nedry warns him not to get cheap on him like Hammond did. One of the people that he sent to retrieve the embryos from Nedry, Miles Chadwick, even complains about Dodgson possibly killing him due to their past interactions, suggesting that Dodgson is also not above killing people as well if they don't do what he was required for the job. 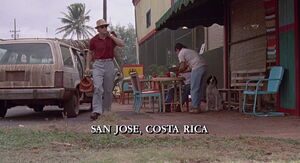 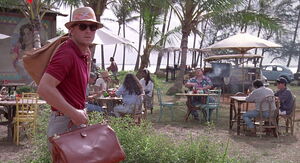 Dodgson loks for Nedry at the restaurant at San José. 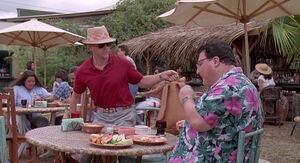 "You shouldn't use my name." 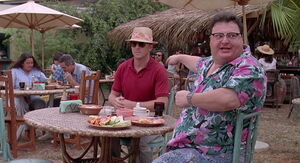 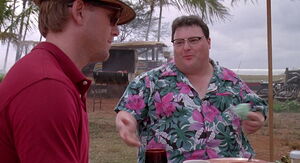 Dodgson told by Nedry that no one cares about who he is. 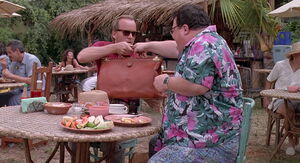 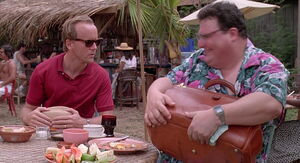 "Remember, viable embryos. They're no use to us if they don't survive." 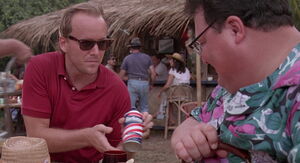 Dodgson gives Nedry the unique Barbasol can with the storage compartment. 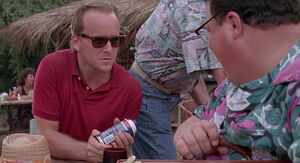 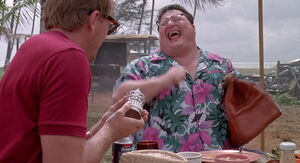 "It's cool and compartmentalized inside." 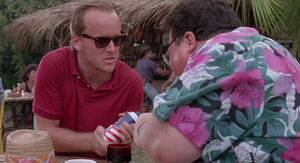 "Customs can even check in if they want to." 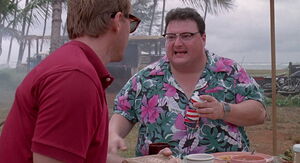 Dodgson after Nedry uses the Barbasol can. 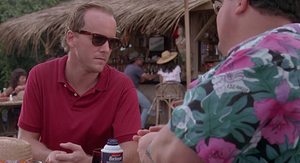 "How are you planning to beat security?" 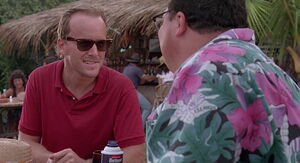 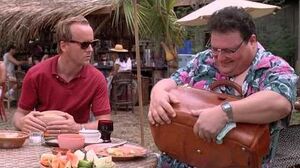