Most powerful of the Dark Purveyors

Aid Swan with his goals.

Lewis Legend, also known as the Rock N' Roller Zombie, is an antagonist in the video game; Lollipop Chainsaw. He is the strongest member of the Dark Purveyors, and presumably the right-hand of the team as well.

Lewis was summoned to Earth along with the rest of the Dark Purveyors by Swan. He took up residence in the Cathedral and when Juliet arrived to confront Swan after killing all the other Dark Purveyors, Lewis suddenly appeared and attacked her, firing bullets at her as he rode in on his motorcycle. Juliet said she was going to take him out too and the Rock n’ Roller Zombie complimented her on her confidence. The zombie hunter declared she was going to mess Lewis up and he replied that he liked her passion, saying that they could make beautiful death together.

Juliet attacked him, but he blocked her chainsaw with his guitar and declared that rock and roll was there to stay, while she wasn’t. The two began fighting and Juliet managed to knock Lewis off of his motorcycle, before severing his legs.

However the Rock n ’Roller Zombie began floating in the air and told her to keep up, before remounting his motorcycle which changed into a large elephant mech known as the Ellyphant. Juliet managed to take on the mech, cutting off its legs, but Lewis had it change forms, having it sprout wheels in place of legs.

Juliet cut off its arms, before severing its elephant head plate, but Lewis again changed its form and continued fighting. Juliet finally defeated the Rock n’ Roller Zombie, slicing him and his mech in half and as he died, Lewis spoke the chant to summon Killabilly.

Lewis is one of the more sadistic of the Dark Purveyors, and due to his drawn-out battle, can also be said to be one of the most stubborn. He frequently refers to Juliet as "babe" and other flirtatious terms, and thinks very highly of himself, even having an unhealthy obsession with his motorcycle.

Lewis is the most powerful of the Dark Purveyors and his main weapon is his guitar, which he wields like a melee weapon. It is also equipped with a machine gun that he fires by shredding on his guitar. The machine gun on his guitar can also shoot large skulls as well. Lewis can also teleport himself through the possible support of his own motorcycle, but he never uses this ability in battle. He can also summon both zombies to aid him and bone towers. Lewis is also shown to levitate in the air if his legs have been cut off.

Lewis’ other main weapon is his motorcycle, which expels large amounts of flame from its tailpipes and he can change into a mech called Ellyphant. In this form, Ellyphant is extremely strong and durable and can move rather fast thanks to the wheels on its feet. Ellyphant is also equipped with a large chain gun and an extendable circular saw arm and can fire missiles and drop mines. It also has a jet booster that allows it to jump in the air and cause a shockwave when it slams into the ground. Ellyphant is also extremely tenacious, able to adapt to damages by changing its form. When Ellyphant loses both of its legs, it is then replaced by two large wheels and still it maintains its speed. When Ellyphant is moving, it expels large flames from the elephant skull head piece, as well as generate a small, but powerful jolt of electricity when Lewis attempts to ram Juliet. When the elephant skull head piece is destroyed, a metallic ribcage surrounds Lewis, and now Ellyphant moves at rapid speed, while Lewis is shooting explosives and mines. 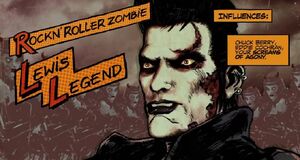 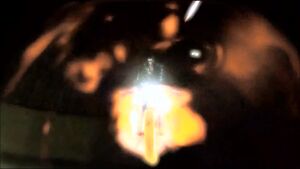 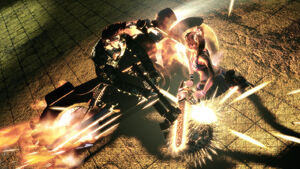 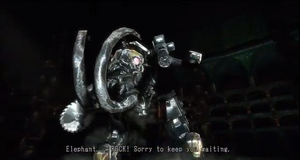 Lewis transforming his motorcycle into Ellyphant 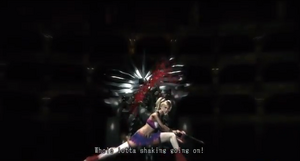 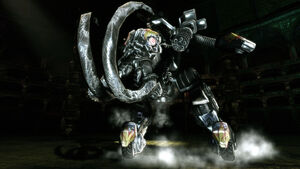 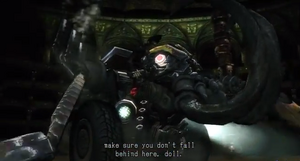 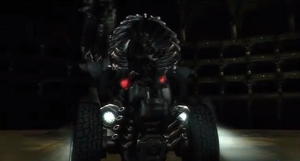 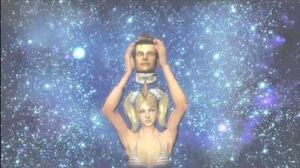 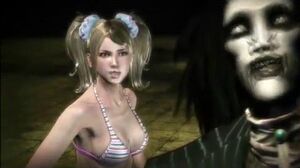 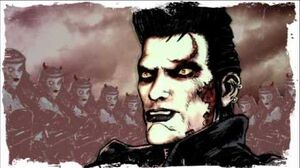