Villains Wiki
Register
Don't have an account?
Sign In
Advertisement
in: Evil Vs. Evil, Evil from the Past, Corrupt Officials,
and 41 more
English

Dad or Daddy (by Lisa and Leonard)

Become rich beyond his wildest dreams and kill the Flash.

He was portrayed by Michael Ironside, who also voiced Darkseid in both the DC Animated Universe and his iteration in the Harley Quinn TV series, and Emperor Zanramon in the 2012 Teenage Mutant Ninja Turtles series, as well as played Overdog in Spacehunter: Adventures in the Forbidden Zone, Richter in Total Recall, and Colonel Dugan in The Next Karate Kid.

Lewis was a corrupt police officer who took his anger out on his children until he was sent to prison for larceny, armed robbery, aggravated assault, and assault with a deadly weapon. It was practically Leonard who raised Lisa all by himself despite the fact that their grandmother was taking care of them while Lewis was in jail.

Years later, Lewis left Iron Heights. Lewis kidnapped his son and injected his daughter with thermite. Lewis threatened to kill Lisa unless Leonard helped him. When the Flash came to "rescue" Leonard, Lewis was surprised to see Leonard taking down the Flash since he didn't think his son had it in him.

While planning a robbery with Leonard and an associate called David Rutenberg, Lewis explains his plan to his complices. Realising that his father's plan could mean that people had to die, Leonard advises his father to make a different approach but Lewis merely tells him that there are casualties in their line of work. When Rutenberg starts arguing with Snart, claiming that his cold gun is the only reason they are bringing him along, Lewis kills Rutenberg by exploding the thermite in Rutenberg's head, claiming that no one talks to his son like that.

Having found out that Lewis blackmails Leonard, Barry visits Leonard, this time at his home. He reveals that he knows that Lewis is forcing him to work with him and tells Leonard that his team is working on a way to remove the thermite bomb from Lisa's head. Lewis then enters the room, surprised to see Barry. Lewis asks who Barry is and Barry claims that Leonard told him that they needed a new technician on the job. He also claims that he previously worked with Snart on the Kahndaq Dynasty Diamond heist. Knowing what Barry's up to Leonard backs him up, claiming that he couldn't have done it without Barry. Lewis agrees to take Barry along and, much to Barry's surprise, reveals that the heist is starting right now.

At the building, the Snart's and Barry enter disguised as janitors. When the security guards at the receptions demand ID's Lewis gives them to the guards but they do not seem to work. Lewis slowly moves his hand to his gun. Seing this, Barry convinces the security guards to let them pass without ID's as otherwise the guards would have to explain to the management why the toilets are still overflowing.

When they arrive on the twenty-seventh floor, they spot two armed security guards. Leonard and Lewis argue as Lewis was wrong about the timing. While they do so, Barry quickly gets the security guards out of the way behind their backs, claiming that they must have taken a break. Arriving at the vault door, Barry manages to breach the security code. However, after he is finished Lewis then shoots Barry as he no longer has need of him. (Barry survives because he was able to catch the bullet fired at him and fakes his own death).

Inside the vault, Leonard uses his cold gun to freeze the lasers. While his father opens the safe and bags the loot, Leonard waits. Both are then confronted by the Flash. Lewis draws the trigger for the bomb inside Lisa's head, ordering Leonard to shoot the Flash. When Leonard hesitates, Lewis tells him to shoot or he will never see his sister again. However, at that moment Cisco manages to get the bomb out of Lisa. When the Flash tells Leonard so, he instead aims his gun at his father's heart and shoots him. While dying, Lewis furiously asks Leonard why he worked with the Flash, as he thought Leonard hated him. Leonard coldly responded that he hates his father even more, right before Lewis' heart stops and he falls down dead.

Witnessing Lewis' death, the Flash then asks Leonard why he did this, to which Leonard responded that Lewis deserved his fate for what he did for breaking Lisa's heart.

In order to save his father from going to prison and therefore becoming the bitter man that hits his children, Leonard travels back in time to steal the jewel Lewis was caught trying to steal, hoping that this would prevent his father from going to jail. However, Lewis is caught trying to sell the jewel to an undercover cop, thus the timeline remains the same and the universe has corrected the past to prevent a paradox.

Lewis Snart is a sociopath since he doesn't care who gets killed unlike his son Leonard like when he was willing to kill the security guards with no guilt. Lewis even killed Barry when he was posing as a tech guy for no reason at all. He is also rather selfish since he was willing to kill his own daughter if his own son didn't cooperate just so he could steal some diamonds to become rich. Lewis even physically abused Lisa and Leonard when they were children just to teach them "lessons". He's arrogant like when he frequently ignored Leonard's advice about timing and contingencies despite the fact that Leonard had more experience in thieving.

Lewis doesn't seem to care about his children since he hit Lisa with a beer bottle when she was young and planted a bomb in Lisa's head just to force his son to cooperate with him. Unfortunately, Leonard executed him without any second thoughts once he learned Cisco removed the bomb from Lisa. 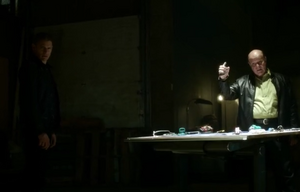 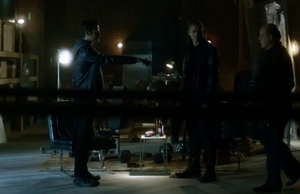 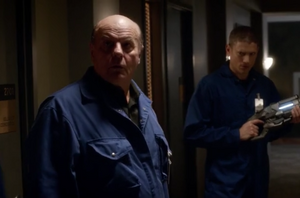 Lewis during the heist 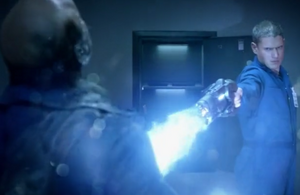 Lewis is killed by Leonard