Destroy the US Government (both failed)

Lewis Wilson is the secondary antagonist of the first season of the 2017 Marvel TV series The Punisher.

He was a young veteran who had a difficult time re-assimilating into civilian society. Unable to overcome his PTSD, he later becomes a terrorist to try and take over the city.

He was portrayed by Daniel Webber, who also portrayed Lee Harvey Oswald in 11/22/63.

Lewis was part of a special operations team of the U.S military which was attacked by friendly fire erroneously killing all of his platoon and being the only survivor, thus generating a hatred towards the government. His time in the military gave him nightmares due to his PTSD to the point where he made a hole in his backyard like a trench where he felt safe with himself.

To try to reintegrate into society, he attended a self-help group created by Curtis Hoyle in which they talked about what happened in the war in addition to the opinions about the US government. There he formed a friendship with O'Connor, a veteran of the Vietnam War who told all of his stories to Lewis. Later, he offered to make a protest to the United States Government for the veterans who he accessed, but during this peaceful protest was arrested and O'Connor abandoned him. Seeing this Curtis decided to post bail to release him, telling him that O'Connor lied about his history and he never went to war.

Realizing the lies of O'Connor, Lewis decided to go to see him at home. After a talk where Lewis confronts O'Connor about his lies, it ends with Lewis killing O'Connor by stabbing him several times in the chest and leaving his body in his chair. Later, Lewis decided to create a way to draw attention to his grievances with the military and the government by shopping for items to create bombs.

After making several of them, Lewis attacked the federal offices where several people were injured and killed, calling the the attention of Frank Castle. Then he sent a letter to Karen Page who told his intentions to the government and the senator Orion about the fraud that was justifying his actions as a terrorist. Karen does not agree and decides to attack his morality while Frank Castle listened to everything with Micro from his base

Curtis sees the situation first and decides to go to see O'Connor at his home, but on arrival he finds his body and the bombs Lewis had been making, being surprised by Lewis who's still there. Lewis tells him he has to leave and he will not go to his self-help group because talking no longer helps him. Lewis and Curtis start fighting, where Lewis wins after he removes his prosthetic leg and knocking him several times in the face with it, leaving him unconscious and attaching him to a bomb.

Frank Castle is warned by Micro that Curtis could be in danger and Frank goes to the house where he finds Curtis surrounded by explosives. Lewis calls and talks to Frank, telling him to work with him and on several occasions he tells him that he wants to be like Frank, but eventually Frank manages to be convince Lewis into telling him how to turn off the bomb.

Lewis escapes and goes to an Anvil Security member named Isaac Lange and kills him, taking his clothes to pose as an employee during the interview with Senator Orion. He arrives at the building where they were and assaults the place with explosives and eliminating the guards, but Frank Castle arrives to save Karen. Lewis however takes Karen hostage and shows a bomb strapped to his chest, managing to escape with Karen to the ground floor of the building.

Lewis begins to recite his soldier phrase which meant to die as one, Frank Castle goes and tries to converse while he had Karen as a hostage, Frank distracts him long enough for Karen to pull the cords of the bomb and Frank shoots Lewis in the foot. Lewis locks himself up in the kitchen's freezer, reciting his soldier's phrase for the last time in front of Frank, who encourages him to "go out like a soldier" and Lewis detonates the bomb to kill himself. 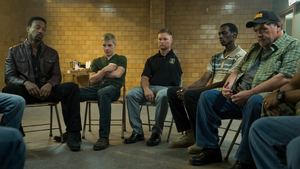 Lewis at the support group. 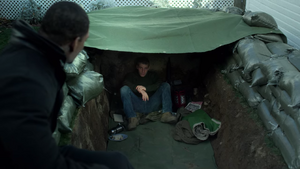 Lewis in his trench. 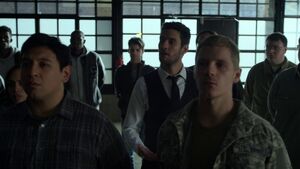 Lewis trying out for Anvil Security. 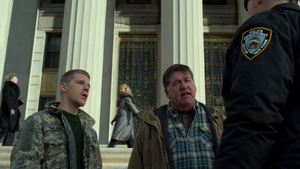 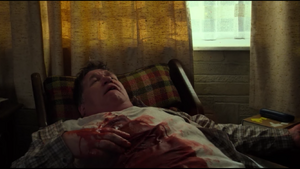 O'Connor after being stabbed to death by Lewis.

Lewis blows himself up to go out like a soldier.