Alexander Joseph "Lex" Luthor is the archenemy of Superman in the Superman comics and media where he usually serves as the main antagonist. He is intelligent and very tricky. Lex's evolution from a mad scientist in Golden Age to a billionaire turned villain in the Silver Age is one of the greatest changes in comic book history.

Lex Luthor is an extremely intelligent, calculating and unpredictable man of immeasurable ruthlessness. He was a mechanical, strategic and scientific genius, maintaining a series of accomplishments in his life. However, due to his intelligence, he is extremely arrogant, vain and narcissistic. He has an incessant habit of flaunting his own intelligence, referring to himself in the third person and creating monuments to himself. He also believes himself to be the greatest criminal mind of his time. As such, he is a complete megalomaniac. He seeks to control everything he sees due to a delusional sense of entitlement. With no sense of empathy, he cares nothing for his fellow man and only keeps people alive if they benefit him. Lex is completely obsessed with destroying Superman because the latter threatens his power and sense of supremacy. This leads to him referring to the Man of Steel in diabolical terms, indicating an obsessive hatred of the Kryptonian.

In the TV show Smallville, young Lex Luthor (played by Michael Rosenbaum) became best friends with Clark after he was saved from the farmboy from a car crash. He started off as a good person, fighting against his father Lionel Luthor, but, due to a harsh childhood, and bad parenting, he envied Clark, and often tried to find out his secret. Their relationship crumbled, and Lex was set on the road to evil. He would use and abuse people with meteor powers, just as his dad would do, until one day he decided to murder his father. He later found out Clark's secret, and was seemingly killed in the Fortress of Solitude's explosion.  He was revealed to be alive but severely injured.  He had to rely on life support through tubes and breathing machines and his face was partially scarred and wore a kryptonite ring with an L insignia. He used Winslow Schott to assist him in his revenge. Wanting revenge, Lex killed all of his previous staff when he attempted to murder Oliver. Watching a view screen connected from Schott's puppet eye, he monitored Schott's setup of a meteor-rock bomb on the roof of the Daily Planet. Knowing Lana had stolen his Prometheus suit, he set Clark and Lana up so that she would have to absorb the meteor rock to diffuse the bomb, and as a result, never be able to go near Clark again. Just when Clark was about to confront Lex, a toy bomb of Schott's that Oliver put there caused a nasty truck explosion with Lex inside, killing him. Lex's remains from the charred truck were later scattered by Clark. Sometime later, Lex was hallucinated in Oliver's reflection.

Lex was mentioned by Doctor Fate as Clark's ultimate opponent in the future, but assured him that he would one day finally triumph over Lex. Clark questioned this, believing Lex had been killed to which Doctor Fate did not respond.  While in a spiritual cornfield, Lex was seen amongst the stalks of corn by Clark. He then disappeared while Clark returned to life. Afterwards, it was discovered Lex used Cadmus Labs to create many clones of himself with the intent to use the clones' body parts to heal his own injuries.  Unknown to anyone for some time, Lex took his failed clones' best pieces to create a perfected, composite clone LX-Ø. Unfortunately, he was unable to successfully duplicate a heart at the time. After Lex's “masterwork” is discovered by a Lionel Luthor of an alternate reality, Lionel's biomedical research company tried to locate Conner Kent for a heart to give LX-Ø but Tess's efforts to hide Conner forced Lionel decide to use Tess as a last resort.

While Apokolips was approaching the Earth and after Tess escaped and shot Lionel for planning on using her heart to revitalize Lex, Lionel desperately crawled toward Lex to which Lionel and Darkseid made an exchange: Darkseid would give Lionel's heart to Lex while Lionel surrendered his own soul to Darkseid in the process.  Completely restored, Lex noticed the alternate-Lionel's change of heart and met with Clark at the Luthor Mansion's remains. Lex told Clark that he embraced his destiny as Clark's nemesis. He was then able to encourage Clark to go fight Darkseid, saying that Clark couldn't defeat Darkseid but they both knew who could.  Lex later arrived at LuthorCorp and confronted Tess, revealing he knew that she was his sister all along and the fact that she shot the alternate-Lionel (who only wanted Lex back). He told her he loved her and the two siblings embraced. Subsequently, Lex stabbed Tess with a long blade. As Tess died, Lex said he was saving her from becoming him, to which she said Clark already has. Tess then rubbed Summerholt's neurotoxin on his face, which interfered with his memory.  She told him he had 30 seconds until his memories were wiped. He forgot everything that happened throughout his life in Smallville. Lex looked out of the office window at the coming Apokolips while its chaotic damage “destroyed” LuthorCorp, leaving behind LexCorp in its place.

Lex Luthor appeared as the main antagonist (despite being outranked by the villains of the sequels) along the years in the Christopher Reeve starred as Superman ,the titular hero ,as he portrayed by Gene Hackman. In these films ,Luthor was introduced as a wealthy manipulative buisnessman who did everything to destroy his archenemy Superman.

He will played by Jesse Eisenberg in the 2016 film as the main antagonist.

Lex Luthor grew to resent Superman when he stole his spotlight as the hero. He usually invested heavily in some of the Man of Steel's greatest foes such as Metallo and Livewire. Lex Luthor was also known for his betrayals on many associates, causing many to leave LexCorp. The only one left was Mercy Graves on Lex's side.

Lex Luthor later fought the Justice League, where he was subsequently defeated. It was then he was exposed as a crook and taken into prison. Graves took over LexCorp affiliations in his absence. He paired up with other villains in an attempt take down the Justice League.

Lex Luthor redeemed himself in aiding in the defeat of the Justice Lords and was given full pardon. However, still bent on destroying Superman, Lex created project Cadmus and succeeded in ruining the Justice League's reputation twice: once by causing Superman and Captain Marvel fight each other and again by having the Watchtower fire at a Project Cadmus related building in New Mexico. After being exposed for his malevolent plans by Batman, Brainiac revealed he had been dormant inside Lex Luthor for some time. Lex Luthor convinced Brainiac to fuse with him because both would reach their ultimate goals, he served as one of the Justice League most difficult foes. However, Flash was able to separate the two after breaking the speed force. Lex went back to jail with a damaged psyche.

After escaping prison again and eluding the cops, Gorilla Grodd offered Lex to become a major player for the newly formed Legion of Doom. Joining only to revive Brainiac (after growing an obsession with him), Lex eventually overthrew Grodd and set the course of the mission toward Apokolips. There he found a version of Brainiac that had been destroyed years earlier. Trapping and absorbing Tala's magic to resurrect Brainiac, to his surprise, he had accidentally recovered Darkseid instead. Warning the Justice League due to him wanting to kill Superman first, he joined them to fight against Darkseid. Lex Luthor later left the battle by Metron and discovered the Anti-Life Equation. Returning to Earth with the Equation, he offered to share the knowledge with Darkseid. The Equation supposedly destroyed (or absorbed) both Lex and Darkseid.

Lex Luthor makes occasional appearances in the show where he is show to own a iguana named Ignatius who is enemies with Superman's dog Krypto.

Lex Luthor was portrayed as a playable character in Mortal Kombat vs. DC Universe. In the story, Lex was first working with Darkseid while ensuring humanity survived. When the Apokolips ruler was presumed killed, Superman turned the Lexcorp owner to the authorities. After escaping, Lex went to the Special Forces base and found their portal technology, but was forced to the base's jail by Jax. He and Catwoman break out and head for Oa. There, Green Lantern defeats Lex before deciding to work with him. In his ending, Lex Luthor had kept stolen Special Forces data to breach the barrier that kept the two worlds separated, forming a Deadly Alliance with Quan Chi.

Lex Luthor is a major antagonist in DC Universe Online and acts as the mentor for villains who choose the path of the "metahuman" (genetic-based), he is also notable as being one of the prime villains of an alternate future in which he successfully kills Superman only to have Earth invaded by Brainiac.

Knowing that he had doomed humanity future Lex returns to the modern age and coats the world in exobytes that unleash a new generation of heroes and villains - despite this the modern Lex decides to exploit the situation for his own insidious goals.

In the original dimension, he fights alongside the villains to take down the Justice League, but failed after he was defeated by Batman.

In the parallel dimension, he's a good friend for the High Councilor and leader of the Regime; Superman, but he supports and finances the leader of the Insurgency; Batman.

Lex Luthor appears in Lego Batman 2: DC Superheroes as the primary antagonist of the game.

Here, Lex Luthor is a presidential candidate and the CEO of LexCorp. Lex first appears at the beginning of the game as a candidate for the Man of the Year award in Gotham City who loses to Bruce Wayne. After Wayne was nominated, the Joker and a gang of supervillains invade the ceremony to steal rare treasure such as money and jewelry.

He is next seen when he goes to Arkham Asylum to break Joker out with the Deconstructor and ask for his help in his scheme for presidency. Together, the villainous duo also plan to expose Batman and kill Superman by breaking into the Batcave and use the Kryptonite stored in a secret vault.

Afterwards, Luthor arrives at City Hall through flying in a Kryptonite powered super robot that resembles the Joker and prepares to make his speech. But the Joker offers to make him his Vice President after he sprays his chemical dust on the electors. The duo are then defeated after a showdown with Batman, Superman, Robin and the Justice League and taken to Arkham Asylum.

Kevin Spacey as Luthor in the Superman Returns film.

Lex Luthor as he appears in Superman: The Animated Series.

Luthor as he appears in Young Justice.

Lex as he appears in Krypto the Superdog the cartoon series.

Lex Luthor as seen in Superfriends as the leader of the Legion of Doom. 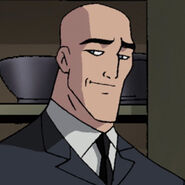 Lex Luthor in The Batman

Luthor as President of the United States.

Luthor as he appears in issue #5 of Superman: Birthright.

Luthor as he appears in Injustice: Gods Among Us.

Lex Luthor in Batman the Brave and the Bold

John Shea as Luthor in Lois and Clark

Add a photo to this gallery
Retrieved from "https://villains.fandom.com/wiki/Lex_Luthor?oldid=1467669"
Community content is available under CC-BY-SA unless otherwise noted.