Alexander Joseph "Lex" Luthor, is a highly intelligent billionaire, the founder of LexCorp, and the archenemy of Superman. Lex is obsessed with destroying Superman and other beings just like him because he believes they are a threat to him and Earth.

Luthor was part of Deathstroke's Pirate crew at the time, however his scene was cut short after Aquaman and his armies stormed Deathstroke's ship, killing Luthor and Deathstroke onborad.

After the Ocean Master was imprisoned in Belle Reve Prison, Lex went to visit him, and offered him a proposal.

He reappeared as the leader of the Legion of Doom, and attacked the Hall of Justice. He fought Superman in his battlesuit but ended up defeated.

Lex Luthor was put under house arrest for his activities. He was later visited by an annoyed Superman who accused him of planning attacks on Mayor Booker through the Intergang armed with Apokoliptan technology, which Luthor subtly denied. Before leaving, Superman tells Luthor, "This city's never going to love you just for hating me", a comment which seriously vexed Lex.

After most of the Justice League have been beaten, Lex Luthor appears and battles Doomsday, blasting him with a powerful energy cannon across the city, and is the first hit to even scratch him. However, when he attempted to get a sample, he was swiftly overpowered and his battle suit was torn apart. Superman recovered just in time to save him.

Lex Luthor holds a press conference in which he introduces Superboy as the real Superman, sponsored and funded by LexCorp. Suddenly, the conference is attacked by the Eradicator, who seeks to eradicate Luthor. Superboy and later Steel attempt to stop him only to be defeated, until the timely arrival of Cyborg Superman, who fights and drives out the Eradicator.

Luthor, angry that Superboy was not declared the true Superman, forces Superboy to be a security escort for the President of the United States. With Cyborg Superman declared as the "real" Superman, Luthor thinks of injecting Superboy with a fatal substance, angrily revealing that Superboy is a clone of both Superman and Luthor; However, Donovan convinces him not to destroy the only viable clone they had managed to create of Superman. Instead, Luthor then unleashes the remaining failed clones to kill Donovan.

After Cyborg Superman announces his plan for a new Justice League: a Cyber ​​Corps, made up of normal people who gain superpowers with robotic parts. Lois recognizes the technology as from Apokolips and questions Luthor's involvement, as he has stolen the technology before. Steel confronts Intergang, the buyers of Luthor's technology, only to find that they have been attacked by the Eradicator. Steel follows the signal of the weapons to the Fortress of Solitude, while Lois breaks into Luthor's attic and meets Superboy, who reveals that he knew Luthor had intended to kill him, which has shaken his loyalty to him " father".

Steel and the Eradicator fight while Lois and Superboy, and later Luthor receives a video call of their fight. At the same time that Lois and Luthor watch a transmission from Cyborg Superman's mind, revealing Darkseid and his plans to invade and form a plan just as Superman, Steel, and Superboy head to Metropolis.

Luthor uses a Mother Box to free the Justice League, who was actually imprisoned in another dimension, to help Steel and Superboy defeat the drones.

Weeks later, the Justice League meets at the Watchtower and they agree that in order to end the war with Darkseid they must go face him on Apokolips. The League is revealed to have invited (reluctantly) Luthor to join as their newest member.

Luthor is visited by Batman asking for information on a delivery list of an ethylene compound to track down Poison Ivy's location. Luthor provided him with the location and demanded to be treated with respect, since he was a Justice League member now. Batman reminded him that he was only a probationary member, much to Luthor's ire.

Now a member of the Justice League, Lex Luthor, along with the other members, attends the Justice League's briefing of their planned attack on Darkseid and Apokolips. Luthor audibly expresses his disagreement with Superman's plan, opting to negotiate rather than fight, but Superman shoots down his proposal of sending an envoy to Apokolips. Luthor agrees to stay in his place as Superman refuses to take the chance that Darkseid will cooperate forever, and they must get rid of him. Later, Luthor accompanies the Justice League as they invade Apokolips. Upon arrival, they are attacked by Paradooms, genetic hybrids of Parademons and Doomsday. Despite the League's efforts, they are utterly decimated, with the League's members either killed or captured. It is unknown how Lex Luthor escaped without injuries, but it is likely he surrendered.

Two years later, after Darkseid assumed tyranny over Earth after the defeat of the Justice League and the Teen Titans, Lex Luthor reclaimed his position as the top of LexCorp as he acts as a New God representative between Earth and Apokolips, while secretly relaying intel to Lois Lane in favor of her resistance force but keeping himself anonymous. Luthor serves as an act of communication to Earth by Batman, who has been brainwashed to become Darkseid's right-hand man. Given that LexCorp is home to Earth's one and only boom tube, which is the only means of traveling to and from Apokolips, Batman gave Luthor orders to transport the Paradooms to Earth after being alerted of the resistance force's attacks on the Reapers.

When the resistance force invade LexCorp to use the boom tube, they are confronted by Luthor in his battle suit. After Luthor hurts Damian, Raven momentarily loses control of herself and a portion of Trigon emerges, which destroys Luthor's suit and would have killed him if Raven did not regain her control. Luthor reveals to the group that he is Lois Lane's anonymous source, acting as a double agent. Luthor joins the resistance force, giving the depowered Superman his battle suit equipped with Kryptonite-laced weapons (which is ironic considering it was created to kill Superman), and the other fighters their own Kryptonite-laced weapons to combat the Paradooms. Using the boom tube to transport Superman, John Constantine, Raven, Damian Wayne, and Etrigan to Apokolips, Luthor is contacted by Batman who becomes aware of Luthor's betrayal, which puts an end to Luthor's double agency.

Luthor stays behind with Lois Lane and the Suicide Squad to combat the Paradooms, intent on keeping them away from the boom tube and thus Apokolips. The group do well at first to fend them off, but become vastly outnumbered, and Luthor erects a Kryptonite barrier to buy time for him to set the self-destruct sequence of LexCorp. Soon after, Luthor's corpse is seen, having been butchered by a Parademon. after the defeat of darkseid constantine requested flash to reset the timeline which he did resulting in another timeline as many heroes and villains resurrected and their fates disappear along with lex luthor thus resurrecting them in a new timeline. 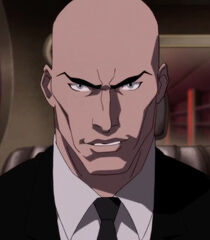 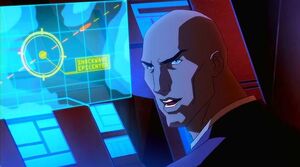 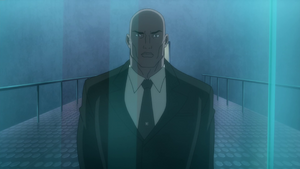 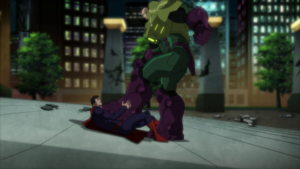 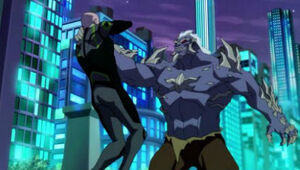 Lex Luthor about to be killed by Doomsday. 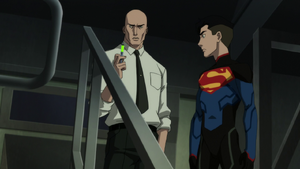 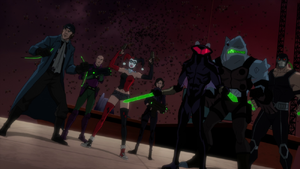 Lex Luthor and the Suicide Squad.
Add a photo to this gallery

Retrieved from "https://villains.fandom.com/wiki/Lex_Luthor_(DC_Animated_Movie_Universe)?oldid=4269086"
Community content is available under CC-BY-SA unless otherwise noted.