CEO of LexCorp
President of the United States

Being the most powerful and most richest man in the world.

Break free from Lionel Luthor's shadow and take over his company (succeeded).

Get rid of Clark Kent and anyone who is disrupting his business deals as well as his top secret projects by killing them (failed).
Become the US President in 2018 (succeeded).

Alexander "Lex" Luthor is one of the main antagonists of the WB/CW TV show Smallville.

Unlike most adaptations where he and Superman are enemies from the start, Lex starts off as a generally heroic character and a close friend to Clark Kent. But as the series progresses, Lex and Clark's friendship broke apart to the point where they become bitter enemies. He also ended up making enemies of other heroes, such as Green Arrow, Aquaman, Mera, Cyborg, and Impulse.

He was portrayed by Michael Rosenbaum who also portrayed Zod in the same series, another version of Lex Luthor (when possessing The Flash) in Justice League Unlimited, Adina/Adam in Sorority Boys and voiced Drago in Jackie Chan Adventures, Johnny Charisma in Batman: Arkham Knight, Lieutenant Franzee re Justice League series, Ghoul and Terminal in Batman Beyond.

Lex was born in 1980, the oldest son of wealthy businessman Lionel Luthor and his wife Lillian. From a young age, he had to endure his father's emotionally abusive behavior. When Lex was twelve, his mother gave birth to his brother, Julian.

Tragically, Lillian killed Julian in his crib to spare him a life being raised by Lionel, whom she feared would make their sons compete for his affection.

Knowing his father would potentially kill his mother if he learned the truth, Lex took the blame for Julian's death and eventually believed for most of his life that he had actually killed his brother.

In 1989, when Lex was nine years old, he accompanied his father on a business trip to Smallville, Kansas, where Lionel was due to buy the Ross Creamed Corn factory. As their helicopter started to land, Lex became scared and shut his eyes, drawing his father's stern criticism that Luthors weren't afraid of anything.

Moments later, while Lionel worked out his deal with the Ross brothers, Lex wandered into the nearby cornfield and came across Jeremy Creek strung up like a scarecrow. Then, meteors began striking Smallville, and one of the meteors landed dangerously close to Lex. Fortunately, Lex survived. The Kryptonite radiation of the meteor gave Lex a heightened immune system, but resulted in him losing his hair.

In his teens, Lex attended Excelsior Academy, where he was bullied by Oliver Queen and was best friends with Duncan Allenmeyer. Sadly, Lex and Duncan's friendship ended when Lex brutally attacked and beat Duncan, who then wandered into the street and got hit by a car.

In 1999, Lex took Amanda Rothman to Club Zero, knowing she would see her fiancé Jude Royce flirting with other girls. When Jude attacked Lex, Amanda shot and killed him. The incident was covered up with help from the Metropolis Police Department.

In 2001, at the age of twenty-one, Lex was sent to Smallville by his father to run the town's LuthorCorp Fertilizer Plant No. 3 and turn it around financially (something Lex saw as a punishment for not living up to his father's expectations).

While driving his car, Lex ran over a roll of barbwire and ended up hitting Clark Kent and crashing into Elbow River. Clark saved him, and the two became close friends, despite the fact that Clark's father Jonathan hated the Luthor family.

Lex started off as a good person, fighting against his father, but due to a harsh childhood and bad parenting, he envied Clark and often tried to find out his secret. Their friendship crumbled completely by Season 5, and Lex was set on the road to evil.

He would use and abuse people with meteor powers, just as his father would do, and he eventually murdered Lionel when he refused to reveal the identity of The Traveler (Clark).

In the seventh season finale, Lex finally found out Clark's secret, and he and Clark confronted one another inside the Fortress of Solitude. Deluded into believing that he would save humanity from Clark, Lex used a Kryptonian device to cause the Fortress to collapse and Clark lose his powers with himself and Clark still inside.

It was eventually revealed that Lex had survived the Fortress' collapse but was left severely injured. He had to rely on life support machines, his face was partially scarred and had to wear a mask, and he wore a Kryptonite ring with an "L" insignia.

In "Requiem", Lex used Winslow Schott to assist him in his revenge against Clark, Lana Lang, Tess Mercer, and Oliver. He killed all of his previous staff when he attempted to murder Oliver at LuthorCorp. Later, watching a viewscreen connected from Schott's puppet eye, Lex monitored Schott's setup of a Kryptonite bomb on the roof of the Daily Planet.

Knowing Lana had stolen his Prometheus suit, he set Clark and Lana up so that she would have to absorb the Kryptonite radiation to diffuse the bomb and, as a result, never be able to go near Clark again. Just when Clark was about to confront Lex, one of Schott's toy bombs (which Oliver placed inside the truck Lex was using as a mobile base) caused an explosion, killing Lex.

Lex's remains from the charred truck were later scattered by Clark as a sign of respect for the man he once considered his best friend.

In Season 9, Lex was mentioned by Doctor Fate as being Clark's ultimate opponent in the future. Clark questioned this, believing Lex had been killed, to which Doctor Fate did not respond.

In the Season 10 premiere "Lazarus", while in a spiritual cornfield, Lex was seen by Clark among the stalks of corn. He then disappeared while Clark returned to life. Afterwards, it was discovered that Lex used Cadmus Labs to create many clones of himself with the intent of using the clones' body parts to heal his own injuries, including an unstable one named LX-13.

Unknown to anyone for some time, Lex took his failed clones' best pieces to create a perfect, composite clone designated "LX-Ø". Unfortunately, he was unable to successfully duplicate a heart at the time.

After Lex's masterwork was discovered by Lionel Luthor (Earth-2), Lionel's bio-medical research company Preclox tried to locate Conner Kent for a heart to give to LX-Ø, but Tess' efforts to hide Conner forced Lionel decide to use Tess instead as a last resort.

When [[[w:c:evil:Apokolips|Apokolips]] was approaching Earth and after Tess shot Lionel and escaped, Lionel desperately crawled toward Lex and Darkseid appeared. Lionel and Darkseid made a deal: Darkseid would give Lionel's heart to Lex while Lionel surrendered his own soul to Darkseid in the process. Thus, Lex was completely restored.

Lex met with Clark at the ruins of the Luthor Mansion and told his former friend that he had embraced his destiny as Clark's arch-nemesis and that he was aware of Darkseid and Apokolips. When Clark vowed to always be there to stop him, Lex replied that he was counting on it. After Clark apologized for failing to save him and left, Lex simply smiled.

Sometime later, Lex was calmly sitting in Tess' office at LuthorCorp, where he was met by Tess. He revealed that he knew Tess was his half-sister all along. Lex then told Tess that he loved her, and the two siblings embraced. He then used the moment to stab Tess with a knife.

As Tess lay dying in his arms, Lex explained that he was saving her from becoming like him, to which she said Clark already had. Tess then rubbed a neurotoxin on Lex's face and told him that he had 30 seconds until all of his memories were completely wiped out. As Tess died, Lex forgot everything that happened throughout his life in Smallville.

Lex then looked out of the office window at Apokolips while its chaotic damage damaged the LuthorCorp logo atop the building, leaving behind the name "LexCorp" in its place.

In 2018, Lex is elected President of the United States and continued his run throughout 2019 as well.

Lex possesses a heightened intellect. After being exposed to Kryptonite radiation when he was young, he gained a heightened immune system, as he hadn't been sick since that day. It was also revealed that he had an abnormal amount of white blood cells in his body, which allowed him to survive serious injuries.

Lex is also skilled in various forms of hand-to-hand combat, including judo, tae kwon do, boxing, swordplay, and gun handling. Much of this he first began learning when he was a young boy, as a way of defending himself from school bullies who would pick on him for his baldness. 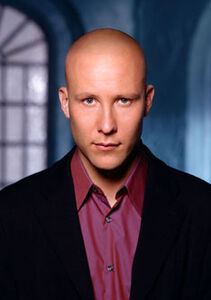 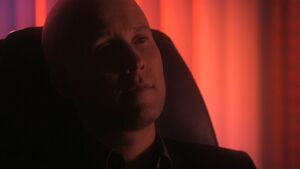 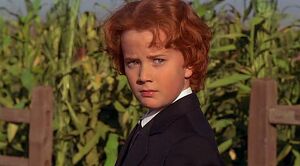 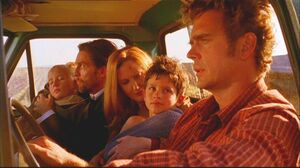 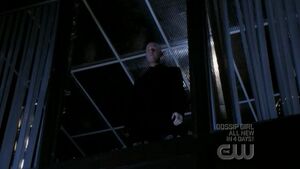 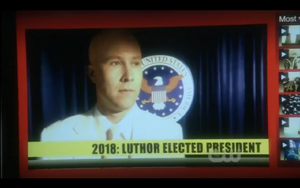 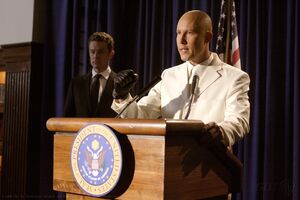 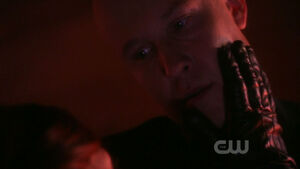 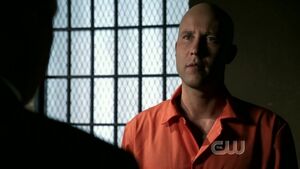 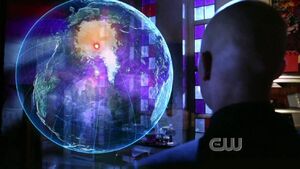 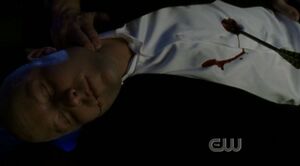