Control of the element of Earth
Axe Sword proficiency

Doing puzzles (in the manga)

Lexaeus, the Silent Hero, is a minor antagonist in Kingdom Hearts: Chain of Memories. He is a Nobody that serves as the fifth member of Organization XIII and wields an Axe Sword and the power of Earth.

Lexaeus was once Aeleus, one of the guards of the castle in Radiant Garden. He and Dilan confront Ventus when the latter is pursuing King Mickey. However, when the Trinity Armor Unversed arrives, Aeleus and Dilan attempt to help Ventus, but Even reminds them of their duty and reveals that Ansem the Wise needs them. Later, Aeleus throws Lea and Isa out of Hollow Bastion.

Sometime later, Aeleus was attacked by Terra-Xehanort, who turned him into a Heartless and Nobody. This Nobody, named Lexaeus, joined the Organization.

Lexaeus is one of the members assigned to Castle Oblivion, along with Vexen, Larxene, Marluxia, and Zexion. He is working with Vexen and Zexion in their own personal scheme opposing Marluxia and Larxene's plan of overtaking the Organization with Sora as their puppet by manipulating Riku and his darkness.

When Riku arrives in Castle Oblivion, Lexaeus confronts him at the end of the fourth basement. After an arduous battle, Lexaeus attempts to finish Riku off, by sacrificing himself in a suicidal attack with the power of darkness which sends Riku to the Realm of Darkness. In the Re:Chain of Memories remake, Xehanort's Heartless instead promptly possesses Riku and finishes off Lexaeus. As he dies, Lexaeus apologizes to Zexion.

Lexaeus's spirit later reemerges as an Absent Silhouette and forms at the Sandlot in Twilight Town after Sora, Donald, and Goofy battled a swarm of Nobodies there. If Sora investigates the Silhouette, Lexaeus engages the trio, but is eventually slain.

Lexaeus is revived as Aeleus along with Dilan, Even, Ienzo and Lea as revealed in Dream Drop Distance. After Lea searches all over Hollow Bastion for Braig and Isa, Aeleus informs Lea that Dilan and Even are still unstable. 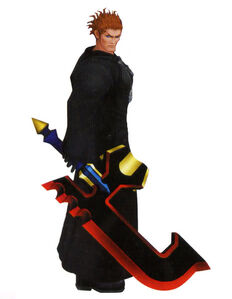