Playing with her phone.

Lexi is one of five psychotic and pretentious hipster art students who intends to murder a stranger on Halloween night in the 2007 black comedy horror film Murder Party. Lexi dresses as Pris from Blade Runner, and is played by Stacy Rock.

Lexi appears to be the most immature of the five artists, perpetually behaving like a 14 year old, and obsessed with her smart phone. She is scolded by Paul at one point for using her cell phone while committing a crime.

Lexi is not very committed to the act of murder as illustrated by her constant distraction by her cell phone, and the fact that she is very willing to go with her friend Sky's plan to avoid murdering Chris. Lexi is a film maker, and she does not know how she wants to kill Chris, only that she intends to mix it into a terrible student film that she is making. Lexi likes to use cocaine recreationally, and claims that stimulants only enhance her powers.

That being said, Lexi disapproves of any drug that is administered by syringe. Lexi seems to be quite vain, and may consider herself a Femme Fatale. Lexi is quite awkward, and does a comedicaly bad interpretation of Pris throughout the film. Lexi is not altogether evil, and actually performs more helpful acts throughout the film than any other antagonist.

Though Lexi is a villain, and she did go along with the murder party plan, she did not have an actual plan of action to kill Chris, and the further into the film it gets, the more it appears that Lexi probably didn't really intend to kill Chris. This is further emphasized by the fact that she holds a cell phone instead of a weapon when tracking Chris down. She is one of the only member of the artist gang who performs any acts that can be interpreted as heroic. These acts include: 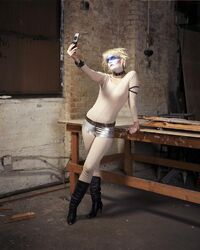 Lexi taking a selfie.
Add a photo to this gallery

Retrieved from "https://villains.fandom.com/wiki/Lexi?oldid=3703518"
Community content is available under CC-BY-SA unless otherwise noted.