Able to steal items and remain

Steal every desk in his class room (successful)

Li'L Hitler is a comedic villain from the stop motion cartoon Robot Chicken. He is a parody of Adolf Hitler.

Li'L Hitler is a 9-year-old boy in an elementary class room. He complains to the teacher about the size of his desk. He then claims to need the desk of a Polish boy next to him who is trembling with sweat. She affirms that every student gets the same desk. Her response only annoys him. Later, Li'L Hitler claims to need the desk of a Czechoslovakian boy who is sitting on his other side. The teacher notices the Polish boy is missing and his desk is connected to where Li'L Hitler is sitting.

The teacher leaves the room and comes back a moment later. She is shocked to find Li'L Hitler surrounded by desks and most of the students missing. A nearby American boy is drinking milk and doesn't care. Suddenly, a Japanese boy spills the milk carton. This causes the American boy to become angry. The segment then ends.

The entire segment is an allusion to the uprising of Hitler's regime and the bombing of Pearl Harbor. Li'L Hitler taking a Polish boy's desk portrays Poland as the first country that Hitler conquered. The Czechoslovakian boy, as the second victim, portrays Czechoslovakia being conquered by Hitler. Li'L Hitler surrounded by desks portrays Hitler's domination over Europe. When the Japanese boy spills the American boy's milk, it portrays the Japanese bombing Pearl Harbor. The teacher is the only exception because she doesn't portray anyone or anything that is historical. 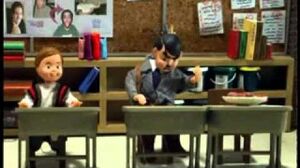