Villains Wiki
Register
Don't have an account?
Sign In
Advertisement
in: Mature, Protagonists, Evil Vs. Evil,
and 87 more

Aid the Liangshan Outlaws to rebel against the corrupt government

Defeat Fang La and the Liaos
Live a simple life

Barbaric Outlaw
Li Kui (李逵), nicknamed the "Black Whirlwind", is a protagonist villain in the classic Chinese novel The Water Margin, set in the Northern Song Dynasty. Although fighting on the side of the "heroes", Li is far from heroic, frequently engaging in atrocities such as the murder of innocent civilians, pillaging, and rape. The only reason he is not seen as an antagonist is due to the fact that the corrupt Song government officials are even worse.

Nicknamed the "Iron Ox", Li Kui is described as being a tremendously strong and muscular man, with "fiery" eyes and a dark complexion. He receives the nickname "Black Whirlwind" for his extremely violent personality, ill-temper and maniacal behaviour whilst in battle. Li is also an alcoholic and a gambling addict. Due to his alcoholism and wrathful nature, Li Kui is feared by many that come across him.

During combat, he wields a pair of axes and is an excellent melee warrior who often fights on the front lines of a battlefield. However, Li is a sadomasochist who not only enjoys fighting but also killing. He is also quite clearly psychologically unstable, prone to random acts of petty violence that partly contribute to his feared persona.

Due to his black humour and controversial actions, Li Kui is one of the most iconic characters of the novel, symbolising both the comical side and the bloodthirsty side (mass murder, including child-killing, and several other atrocities to the disgust of many other outlaws) of the Liangshan Bandits.

Li Kui originated from Baizhang, in modern-day Shandong.  After a manslaughter incident, he was forced to flee his town. He later came to serve as a prison warder under the warden Dai Zong in Jiangzhou (modern-day Jiujiang in Jiangxi Province). There, he befriended the future outlaw leader Song Jiang, who had been exiled for murder. When Li and Dai accompany Song to a restaurant, the former begins to crave for fish. Upon learning that the fish in the restaurant is rotten, Li goes to the nearby market and picks a fight with the fishmongers, among which was Zhang Shun. Song and Dai show up and end the brawl.

Unfortunately, Song was arrested again, this time for drunkenly reciting a rebellious poem, and sentenced to death alongside Dai. However, Li and several other people stormed the execution ground and massacred everyone there, even the unarmed innocents, and rescued Song and Dai. On the way to the outlaw stronghold in the Liangshan Marsh, Li murders everyone in their path, only stopping by Chao Gai (Liangshan's then-leader) 's insistence. He then becomes a member of the bandits.

A few chapters later, Li returns to Liangshan to fetch his mother. Along the way, he runs into a man named Li Gui, who impersonates him and robs random civilians. Li Kui beats Li Gui due to the impersonation and tries to kill him, only stopping when Li Gui tells him that he needs to feed his elderly mother. However, Li Kui later finds out that Li Gui lied, so he killed him. However, Li Gui's wife managed to escape.

When he finally reached home, Li Kui decided to carry his mother to Liangshan to live a comfortable life. However, his mother grew thirsty, and Li dropped her off to fetch some water. In the meantime, however, a pack of tigers attacked and killed her. Outraged, he stormed into the tigers' cave and managed to kill all of them, two which were cubs. Because of this act, Li becomes famous throughout the town.

A landowner named Cao pretended to admire Li for this act, but in truth, he was plotting to capture him after Li Gui's wife had told him that he was a criminal and that they wan to hand him back to the magistrate to be rewarded. They spiked Li Kui's wine and the magistrate sends some guards to escort bring Li to the county office. However, Zhu Gui and Zhu Fu, a pair of Liangshan brothers, drugged the guards and Li Kui escaped and murdered all the guards except Li Yun, who joined the bandits.

After the Grand Assembly of the 108, the outlaws, including Li Kui, begin several campaigns against the Song government. When under Li's commands, however, the rebellion was not pleasant. Towns and villages were plundered and raided, men were butchered and women were raped, and there was even an instance of cannibalism where Li and a few others would kidnap innocents to cook and eat. Eventually, his fellow bandits become sick of his actions and only let him go on missions once he agrees to a list of rules to bar him from committing serious offences, one of which he often breaks.

However, Li, alongside the rest of the bandits, would be later spared by Emperor Huizong to fight the rival Liao Empire. However, believing amnesty to be a sign of the outlaws' surrender to the government, and does whatever he can to prevent it. Ultimately, he fails, and the outlaws secure amnesty anyways.

Li was one of the few of the outlaws to survive all the campaigns against the Liao Dynasty, Fang La, and other rebels. Following these, he was promoted to become an official by the Emperor but showed little interest in politics, often resorting to drinking and fighting like his past self. Song Jiang became the governor of Chuzhou (modern-day Huai'an). However, due to jealousy, several of the officials, such as Gao Qiu, Tong Guan and Cai Jing, poisoned Song. Fearing retribution and rebellion by the wrathful Li, which would tarnish the outlaws' name, Song poisoned Li, dying together.

Despite his unnatural death, however, Li Kui escaped true punishment for his many crimes against innocent civilians. He would later appear in Emperor Huizong's dream and tell him about thier wrongful deaths. Unfortunately, the investigation comes to nothing. Huizong then bestows honours upon Li and the outlaws. 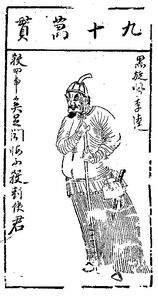 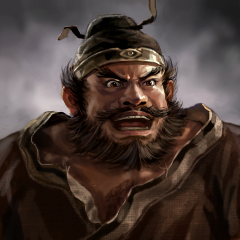 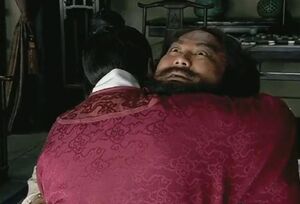 The death of Li Kui
Community content is available under CC-BY-SA unless otherwise noted.
Advertisement