Villains Wiki
Register
Don't have an account?
Sign In
Advertisement
in: Mercenaries, Poachers, Phineas and Ferb Villains,
and 34 more

To kill both Perry and Doofenshmirtz and turn them into trophies (failed).

Liam McCracken is the main antagonist of the Phineas and Ferb episode "Primal Perry". He is an infamous platypus hunter bent on hunting down platypuses for his own pleasure.

He was voiced by the guest star Jesse Spencer who also portrayed Dr. Robert Chase in House MD.

Liam's hatred of platypuses started at a young age. In Australia as a baby, his mother was distracted by a platypus, leaving Liam and his stroller to roll away, and he never saw her again. Ever since then, Liam made a living by hunting down platypuses. He also carries a collection of boomerangs (even giving them lady names to suit his purposes), which he uses as weapons; even one can be able to cut down a large tree.

Upon learning of Liam's occupation from an evil consultant website, Heinz Doofenshmirtz decides to hire him into capturing his nemesis, O.W.C.A. Agent Perry the Platypus. To do so, Doofenshmirtz lays out smoke signals to lure Perry to the Danville Botanical Gardens, where Liam traps Perry. After Liam explains his backstory to the two, Liam start to introduce his boomerang collection, which starts to disturb Perry, even Doofenshmirtz finds it to be creepy.

At that point, things get out of hand when Liam announces that he's planning to kill Perry and make a trophy out of him. This does not look good for Doofenshmirtz, who objects to this by saying that it was not part of the deal. However, Liam betrays Doofenshmirtz by trapping him and handcuffing him to Perry, threatening to make a trophy out of him too. Liam then gives the two foes a 60-sec headstart so that he can hunt them down, forcing the two to run.

Having no choice, both Doofenshmirtz and Perry are forced to work together to defeat Liam in his game. In order to do so, they create a series of traps using the garden's habitats. Despite their efforts, Liam manages to stand his ground before engaging into a boomerang fight with Perry. Just as soon Liam finally manages to pin Perry down and prepares to kill him, he is stopped by Doofenshmirtz, who has called in the garden's groundskeepers Ruth and Esther to the scene, explaining that Liam has damaged much of the garden's habitats with his boomerangs while hunting down Perry. Realizing that Doofenshmirtz is telling the truth, Ruth and Esther force Liam to spare Perry and escort him out from the gardens on a wheelchair. It is later revealed that Liam is actually of American descent, as Ruth revealed that his file says that he came from Pittsburgh, prompting him to cry out in defence as his Australian accent slips revealing that and his backstory to be fake. He is last seen being rolled down on the wheelchair screaming as Ruth and Esther are distracted by Perry's appearance. 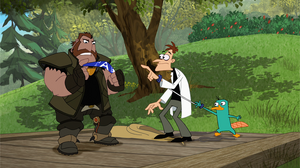 Liam giving both Doofenshmirtz and Perry 60 second to run so that he can hunt them down. 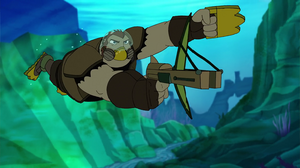 Liam attempting to hunt down Doof and Perry underneath the pond. 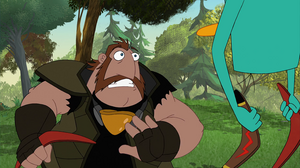 Perry using two of Liam's boomerangs to gain the upper hand, much to Liam's distraught. 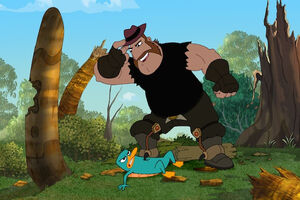 Liam pinning down Perry while taking his fedora hat as a memento, declaring to be his greatest hunt ever. 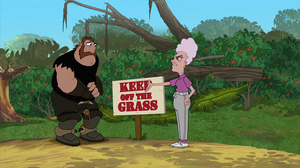 Liam being confronted by one of the groundskeepers (informed by Doofenshmirtz) for his rampage around the gardens, forcing him to spare Perry. 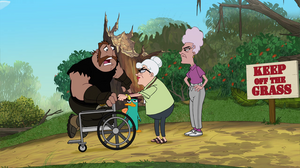 Liam being escorted out on a wheelchair as he attempts to put the blame on Perry for his actions (to no avail).