Liana Telfer is a villainess and the secondary antagonist in Roman Polanski's "The Ninth Gate". A member of a secret Satanic cult of the Ninth Gate and seductive widow to the late book collector Andrew Telfer, she seeks the book "The Kingdom of Nine Shadows" which the protagonist obtained from her late husband prior to his death and goes to great lengths to obtain it.

She was portrayed by Lena Olin, who also portrayed Mona Demarkov in Romeo is Bleeding, The Colonel in Hunters and Ingrid Block in the Law & Order: Special Victims Unit episode "Confidential".

In the film, Liana is mourning her husband's death when the protagonist, book detective Dean Corso, hired by book collector Boris Balkan, pays her a visit. As she sits down and he asks her what does she know about the book, Liana notices that the book is very similar and upon quick study, recognizes it to be one of her husband's books from his collections. Corso tells her that the book was in her husband's collection up until very recently and that he was asked to authenticate it. Liana is very surprised and in disbelief of this and that her husband could have sold the book, especially since that book was one of her husband's valued possessions. Corso questions her that if she has not learned of his selling the book to which Liana replies that she had not and that her husband did not even tell her that he sold the book before his death. Liana then asks Corso who bought her husband's book and Corso, knowing of which, refuses to tell her strictly due to it being business matters. Liana then asks Corso if she could know the name of the buyer. Liana then tells him that the buyer has a bill of sale which Corso admits but nothing more. Liana then questions Corso of his job profession being a rare book collector which Corso confirms to her and she labels him a "book detective". Corso continues, asking when and where did her husband acquire the book. Liana tells him that she and her husband bought the book when they were vacationing in Toledo, Spain, recalling how very excited her husband got when he bought the book for a great deal of money, calling him a fanatical collector. Liana then shows Corso the library which contained her husband's rare books just next to his office where he worked. Corso stated he was impressed. She went on describing how her husband spent many hours in his study, to the point of too many long hours. Corso asks her if her husband ever tried the book out to which Liana reacted in confusion, saying she does not understand. Corso meant if he ever tried any weird acts in hopes of the book producing any supernatural effects. Liana laughs at the matter, admitting that although her husband was eccentric, he was not an insane man. She goes quiet, admitting that her husband was acting rather strangely the last couple of days prior to his suicide, as he kept himself constantly occupied in his study and seldom emerged from time to time except during meals. Liana sadly recalls the morning of her husband's death and how she was awakened by the maid screaming from the discovery of his dead body and that he had hanged himself from his office chandelier. Both Liana and Corso take a silent moment to reflect of her husband's suicide as they both looked at the now broken chandelier still hanging in the office. Liana then clears herself of any sad emotion and assures Corso that whatever "power" the book allegedly contained, her husband was not performing any strange rituals or acts in an attempt to raise the undead before his death. Corso corrects her that the book her husband owned was used to summon The Devil, and Liana eerily smiles.

Soon after, Liana pays Corso a visit when he is getting ready to leave. She comes into his apartment hoping to talk business. She admits that she was too surprised than she should have acted when Corso showed her the book that he bought and that she was hoping to get it back as she reminded him that the book was one of her husband's favorites. Corso tells her that obtaining the book would be a problem; Liana tells him whatever problems he has in obtaining the book would not be a problem and it depends, as she knows he is a book collector. Corso dismisses her, telling her that the book is not his to depose of. Liana asks him if he works for money. She tells him that she has a great deal of money and that he could simply stage a theft just so she could acquire the book. She also assumes that his client would be well insured if the book he owned ever got stolen just so she can have it. Corso reminds her that he is only a professional book collector, to which Liana calls him out as a professional mercenary and that mercenaries works for the highest bidder which she could make happen and that she could even give him a bonus. Corso tells her that she must have seen something like this happen before to which Liana confirms, that she has seen in happen before—in the movies. Corso then says to her that he thinks she might be hiding an automatic weapon in her stocking. Liana then sheepishly smiles and lifts up her dress, flashing her stockings and undergarments to him seductively, assuring that she is not hiding a weapon. Corso then offers her a drink and as he serves them drinks, Liana touches him suggestively, causing Corso to feel a little uncomfortable. Liana then she puts both their drinks down on the table, after which she proceeds to kiss Corso on the mouth passionately and aggressively, leading into an intense make-out session on the couch between them. As they continue kissing, Corso lifts up her dress but does not notice that Liana has something embedded on her skin—the tattoo of a serpent.

After their sexual tryst, Liana reaches over to inspect Corso's book bag and finds nothing. Disappointed, she asks Corso where is the book she is seeking. A drunken Corso asks where is what, claiming he does not know what she is talking about. Enraged, Liana curses at Corso and loudly tells him not to mess with her. Corso smirks, telling her that he already did. This causes Liana to become more angry and she grabs him by his hair. Holding onto him by his hair, Liana snarls continually as she attacks Corso who struggles in the ensuing attack. Shoving him into a heavy piece of furniture, Liana snarls and attacks Corso again with open arms and her talons out at him hoping to scratch him which Corso blocks. This leads to Liana to use her teeth instead to do the damage and bites Corso in the chest, temporarily wounding him. As Corso painfully screams, Liana lets go of him, grabs a bottle of vodka, approaches Corso from behind and hits him in the top of the head with the full bottle of vodka, knocking him out cold with a bloody head wound before leaving his apartment in search for the book.

Liana and her henchmen

Liana in her true Satanist form 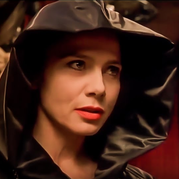 Liana being called out as a charlatan by leader Balkan