Keeping the library clean and meticulous.
Haunting the people who disturb her.

Keep the library nice and neat.

Defeat the Ghostbusters (failed).
Get her revenge on The Collector (possibly, indirectly succeeded).

She was the ghost of librarian Eleanor Twitty and the very first ghost that the Ghostbusters encountered. She appears to be a very odd reader as she likes to stack books up in the air. A team of three paranormal scientists managed to destroy her shield and trap Eleanor, but then some realize that it was to easy to the point it seem to them that she wanted them to have it.

She was portrayed by Ruth Oliver.

Eleanor Twitty was born before the 1920s, and became the head librarian of the New York Public Library in New York. According to the newspaper article that Winston Zeddemore researches in 1991, Eleanor was seduced by Edmund Hoover, who was also known as "The Collector" and was a rare book collector. Eleanor was unaware that Hoover was using her to get rare books, including the Gozerian Codex.

When Eleanor realized this, she broke off their relationship and their engagement, but he murdered her in a secret section of the library that was constructed by Ivo Shandor. In 1924, Eleanor was the fifth woman to go missing under mysterious circumstances, and Hoover was caught and hanged before declaring that he would return as Azetlor the Destroyer. Eleanor became a spirit and was cited to be seen by 1924, and she continued to roam the library.

In 1984, the Library Ghost was disturbing the library, and later scared the librarian Alice in the opening of the film. Ray Stanz, Egon Spengler and Peter Venkman, three paranormal scientists, were brought to investigate the disturbance. The three came into contact with the Library Ghost, and when Ray told the group to "get her", she changed into her frightening form and scared them away. It's assumed that Twitty continued to roam the public library, and it's hinted that the Ghostbusters attempted to capture her before 1991.

In 1991, The Ghostbusters hear of a ghost outbreak happening at the library while going to the Museum, an decided to settle the score and capture the Grey Lady. The outbreak of ghosts also happened because of a paranormal wave caused by Shandor's descendent, and the mandala nodes in New York.

Ray, Egon, Winston and the new recruit go the library, and come across the Grey Lady after fighting ghosts that could manifest books to attack them. Winston goes to the archives and gives the others information on the Grey Lady's past, and tells them of The Collector and the Gozerian Codex. The information shocks Ray, who has held a grudge against Twitty for scaring them in 1984.

The Ghostbusters continue to look for the Grey Lady, and she is seen reading books, looking over books, and shushing the group when they speak. However, she shows her irritation towards the group by separating them, manifesting books to attack them, and screams "Quiet" to the Rookie when he is separated from Egon and Ray. The Library Ghost takes them deeper into the library, and they found her to an unground room reading the codex, and apparently shows how she was killed when the book attacks her. The Grey Lady allows the Rookie to take the codex, and quietly disappears, causing Ray to believe that she has passed over after they have taken the book, and has let go of her hatred for them.

However, she returns and changes into her "scary form" to fight the Ghostbusters, but is easily defeated and trapped after the group destroy Gozerian books that she was using to generate an energy shield. Ray realizes that the battle was too easy to the point that it seemed that she wanted them to have the codex, and a portal to an alternate dimension appears. Egon reveals the portal is a result of the energy produced from their battle with Twitty, and has caused a dimensional rip.

Ray, Egon and the Rookie go through the dimension, battling other ghosts, and surmise that Twitty did this to lead them to The Collector, who has become Azetlor. Also, Egon and Ray realize that Ilyssa Selwyn is connected to the paranormal events that have happen recently, notably the hotel, the return of Stay Puff, and the ghosts at the library. The Ghostbusters return to the library, but where the membrane of the dimension is still part, and defeat The Collector. After returning to the public library and reuniting with Winston, the group see a Mandala node, seeing one of them closing.

Though Egon and Ray were correct that Twitty allowed them to take the book, but it's possible that she wanted them to defeat The Collector to get her revenge. That being said, she also could have done so presuming that the Ghosbusters and The Collector would die fighting each other. Towards the last act of the video game, Ivo unleashes the Ghostbusters' containment unit to get an alternate energy source, thus releasing every ghost the group had trapped. It's assumed that the Grey Lady escaped, and returned to the public library, went onto the afterlife, or wasn't in the containment unit. 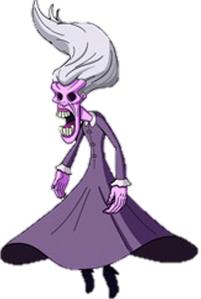 The spirit of Eleanor Twitty appears in Ghostbusters: The Video Game. 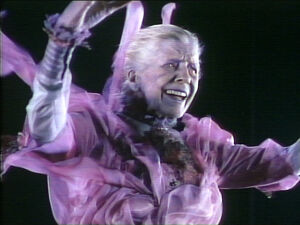