Taking the hearts of those who have perished.

The Lich is a minor villain in the Kingdom Hearts series, and a member of the Pureblood Heartless.

The Lich was seen after Sora came back from the Final World, where it was collecting the hearts of Riku, Donald, Goofy, King Mickey, Kairi, Ventus, Aqua and Lea, one at a time. This led Sora to fight against it in the various worlds that he has visited until he went back to the Realm of Darkness. Young Xehanort mentioned the Lich to Sora, possibly indicating that it is an ancient form of Heartless and that Sora was dooming himself by following it. 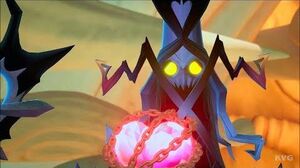