Aid Figg in her mission to capture Robyn and keep her father's inheritance money (failed).

Lickboot is the secondary antagonist of the 1992 animated film Tom and Jerry: The Movie.

He is Aunt Pristine Figg's lawyer and accomplice, and they both want to capture Robyn Starling so they can have her father's inheritance money. A running gag is when he has a money fit, and his annoyed boss puts a stop to it.

He was voiced by the late Tony Jay, who also played Judge Claude Frollo in Disney's The Hunchback of Notre Dame, Shere Khan in Disney's The Jungle Book 2 and Talespin, Monsieur D'Arque in Disney's Beauty and the Beast and Megabyte in ReBoot.

Lickboot first appears when he drinks a cup of tea and Lickboot told Figg that she will be able to live without Robyn. Because of this, Figg told Lickboot to shut up and called him a hoodoo. But Lickboot replies that it is true and that her Starling trust fund money will go bye-bye, and she will be out in the cold, and Figg tells him to scheme and stop talking.

Lickboot and Figg then sing a song about money. Then they discuss about Robyn's father still alive, that he survived the avalanche.

When Figg discovers Robyn has escaped again, she, Lickboot and Ferdinand try to find Robyn under the bridge, but Tom, Jerry and Robyn escaped on a raft in the river. Lickboot, Figg, and Ferdinand create a million dollar reward for Robyn on every milk carton. The three villains found out that Robyn is located at Captain Kiddie's carnival due to her separated from Tom and Jerry when their raft crashed into a ship, and immediately drive there to fetch her.

Lickboot, Figg, and Ferdinand arrived at the carnival to fetch Robyn, but she, Tom and Jerry escape yet again on a boat. The three villains pursue the three heroes across the country.

Eventually, he, Ferdinand and Figg corners her in the cottage. Lickboot tries to sternly convinces her to never run away again and grabs her wrist. But only Robyn attacks Lickboot by kicking him on his leg, causing him to release her and bounce in pain. Lickboot accidentally set the cottage ablaze in the process after bumping into Figg while she tried to catch Robyn. Lickboot tries to convince her to go safety in vain, but Robyn refuses, and he and Figg are forced to escape. Lickboot got the keys, but Figg broke all the keys off the chain. Eventually, Figg found the right key to escape, but unfortunately, she and Lickboot are tripped by Ferdinand, and the three fallen to the boat. The boat activates and goes haywire in the process, and sails away towards an unknown fate.

It's unknown what happened with Lickboot along with Figg and Ferdinand afterwards, but as there was no one to captain the steam boat. They were arrested by Robyn's father for their crimes. 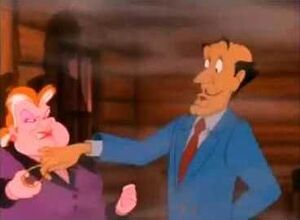 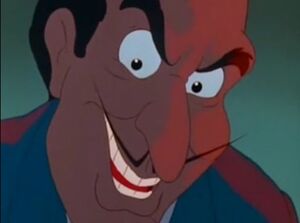 "We've got to have...MONEY." Lickboot's Evil Grin and most famous quote. 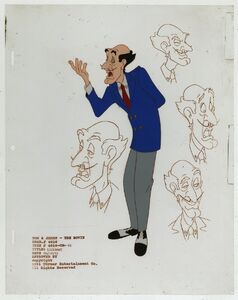 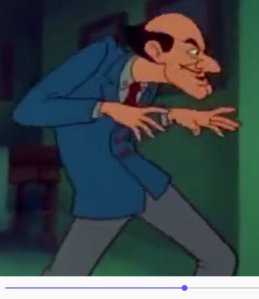 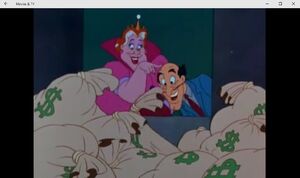 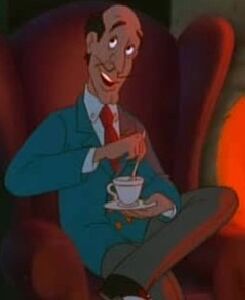 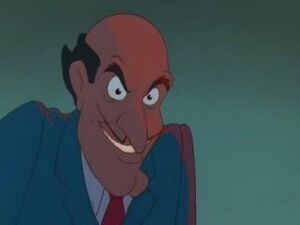 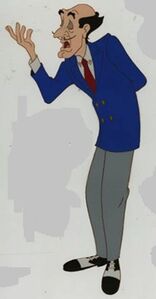 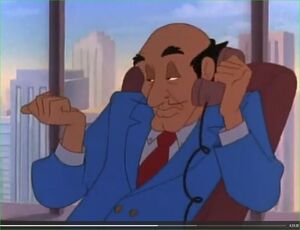 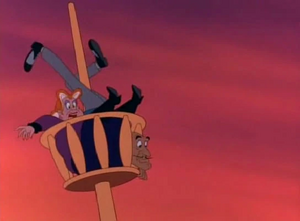 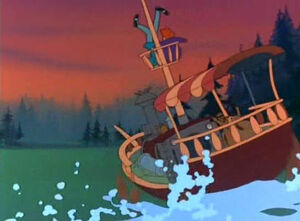