Start a Wiki
Lieselotte Achenbach is a little girl who lost her family (unknowingly, by her own hands), and whose older sister Elfriede's body was placed on a puppet she carries around. She was hired by Mildred to capture Heart. In truth, Elfriede is very much alive but amnesiac as "Zenia Valov".

She is also known as the "Crimson-Eyed Criminal", became a cold-hearted assassin after losing her family. She travels the world alone, accompanied only by a leg-less ball-jointed puppet which carries the consciousness of Elfriede, her older sister. Her Arcana is Gier (Shadow), a creature composed of purely negative emotions that Lieselotte summons with drops of her own blood.

She is known internationally as the “Crimson-Eyed Criminal.” After losing her family, Lieselotte was emotionally scarred, and she became a cold-hearted assassin. Somehow, Lieselotte carries around the consciousness of her older sister, Elfriede. Lieselotte’s sister has the power to manipulate puppets, and together, they are a force to be reckoned with.

Lieselotte does not know how she got into her current situation. She can remember living peacefully with her family. She can remember the smell of her mother’s warm baked goods. She can remember playing with her older sister, Elfriede. However, something horrible happened to all of them. Now, she travels the world alone, accompanied only by a ball-jointed puppet with no legs. Lieselotte has hopes that one day she and her family can all live together again and be happy. One day, Lieselotte was hired by a mysterious woman who asked her to capture Heart Aino and then disappeared. Lieselotte then heads to Japan to capture Heart Aino. Upon successfully capturing Heart, Lieselotte began regret within her self after fighting Heart (due to her caring but yet cheerful personality) where she began to distrust her contractor and after heading to skies secretly Lieselotte broke her contract and let Heart free where at the end Heart headed For Mildred where after the defeat of her, Lieselotte decides to keep an eye out for Heart for unknown reasons.

Lieselotte has a German accent. Heart calls Lieselotte "kidnapper" due to her storyline. 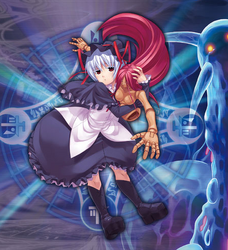 Retrieved from "https://villains.fandom.com/wiki/Lieselotte_Achenbach?oldid=3778014"
Community content is available under CC-BY-SA unless otherwise noted.