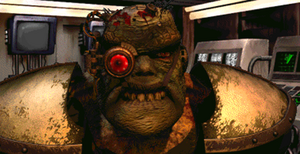 The Lieutenant's main goal is to find out the location of Vault 13 so the mutants can invade it and gather its residents for transformation into super mutants. The Lieutenant follows and believes in the work of the Unity, and therefor is not necessarily evil, he is in fact very noble, peaceful, and negotiable to say the least. Though his main motives do not define him as evil, many of his means to achieve his goals tend to be rather excessive, and he often shows little to no remorse over these actions, sometimes even showing glee. When questioning the Vault Dweller over the location of his vault, he has a very calm conversation with the Dweller and handles many of his outbursts and insults with little to no hostility, though much of the conversation leans into the Lieutenant's fondness of threatening and will to kill the Vault Dweller and others. When interrogating the Vault Dweller about where his vault is, the Lieutenant tends to bring up the process of torturing the Dweller for information, and in one instance brutally punches him, and responds by asking if he is "feeling a little more chatty now?"

The Lieutenant can be killed in two ways, he can be fought and killed, resulting in his cyborg body graphically melting and falling apart. Another is a simpler route, by ignoring him and destroy the facility. Since the destruction of the facility is mandatory to completing the game, the Lieutenant's death is canon.

Retrieved from "https://villains.fandom.com/wiki/Lieutenant_(Fallout)?oldid=3019109"
Community content is available under CC-BY-SA unless otherwise noted.